An Open Letter To Victims Of Abusive Relationships 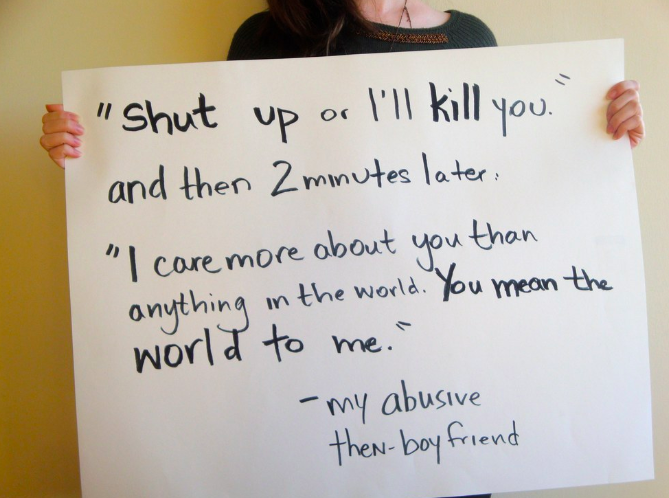 It’s easy to make excuses for the people you love. You can be easily blinded when you so deeply invested in the relationship. We often think, “That could never be me” or “if he ever hits me. I’m leaving.”

Then the sweet taste of irony hits hard. That’s when you are coving up the bruises, afraid of a future without the person who gives you the most pain.

Love is never supposed to hurt and that is the bottom line. As cliché as it sounds, I think what is most important is finding that love and respect within yourself. That was something that I didn’t do.There was a point in my life where I had no self esteem and was suffering from depression. I ended up being in a horribly toxic relationship.

I don’t hate this person, despite what you think. I hate how willing he was to hurt my spirit, and I hate that the bad times overshadowed the good times by a million. I was involved with this person for two years and I thought this was the love of my life. When we started arguing more frequently, I thought it was normal. However, there were no compromises. He was always right and there was no way around it. I was always left apologizing because he would threaten to leave, and I would feel like it was my fault.  He was very possessive. I wasn’t allowed to wear certain clothes and it was always a problem when I had guy friends.

Our arguments then got verbally abusive.

Think of the worst statement you can say to a person and that was said to me on a day to day basis. So those arguments turned into him punching wall and car doors around me. Then he would spit on me and embarrass me in public.

Then he started hitting me.

Yeah he drove me wherever I wanted to, but I was hit numerous times in that car. Yeah he took me shopping, but I was spit on and slapped in the parking lot .

At the time I didn’t realize that this is known as narcissistic abuse. This person claimed to be a “superstar” or a self proclaimed “savior” that he felt I should be grateful for.  There was no empathy for my needs or how I felt and even though I forgave him every time he apologized. It was draining my identity piece by piece. The relationship disempowered me mentally, physically and spiritually. I didn’t even recognize the woman I became. I was constantly crying, barely sleeping and had gained weight.

It was worse. I was self harming by cutting myself, starving myself and depriving myself from sleep.

I think the reason I tolerated this behavior for so long was because I didn’t have any self love. I hated the person I was. The most toxic relationship a person can have is with themselves. The harsh reality is that every relationship you have is a reflection of how you treat yourself. When you truly find self love and appreciation, you don’t stand for disrespect or pain and you are unapologetic by the boundaries you set for the people around you. I was already mistreating myself, so what did it matter if someone else did? I thought I deserved it.

That was the farthest thing from the truth.

After leaving this relationship, I finally undid the blinds I had placed on myself for so long and I now can see the relationship for what it was. It was filled with distrust, disrespect, violent temper, hypercriticism and guilt trips. I realized I am worth a lot more and deserve so much better then I was giving myself credit for.

It’s scary to let go because people are so used to the same routine. The reality is it will hurt, but the hurt won’t last forever. Would you rather have a short time of heartbreak or a lifetime of pain? God does not give you anything you are not already strong enough to overcome and sometimes the most painful lessons have the greatest triumphs.

Take the leap and give yourself the chance to grow to your full potential.