Orange and Blueprint All Wrong 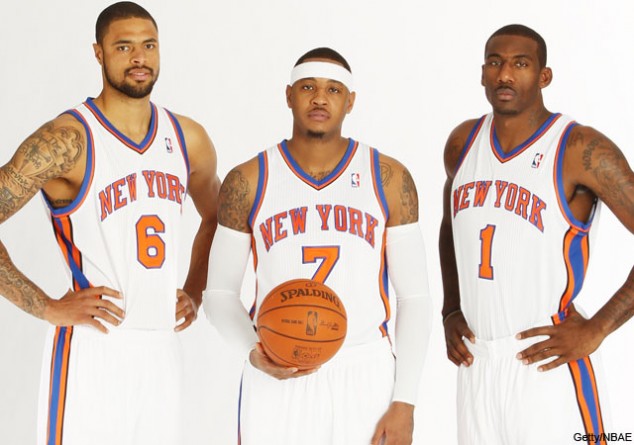 (From L to R) Chandler, Anthony, and Stoudemire

“The best front-court in the NBA”

It’s early in a season that’s going to be a hectic, wild, ride and still has a ton of basketball to be played. The defense is improved thanks largely in part to the quick hands of newcomer Iman Shumpert and the interior presence of Tyson Chandler. The Knicks were finally on the right track and set up to move forward.

Donnie Walsh, the savior who not only saved the Knicks out of the doldrums, but converted them from a laughingstock into a playoff team. He brought in Amare. He drafted Iman Shumpert. He snatched Landry Fields out of anonymity and saved the Knicks from the type of financial mess that has handcuffed the Mets and doomed them to serve as a league punching bag. And then James Dolan got involved.

Like the rich kid who needs to have the shiniest car or the newest phone, Dolan had to have Carmelo Anthony at any cost. He inserted himself into the negotiations and forced Donnie Walsh to mortgage the farm for Carmelo, giving the Knicks two centerpieces about which Dolan could brag (and hike both ticket prices and expectations). Then came the lockout.

The Knicks were in the Chris Paul hunt. Then, reality set in and anyone who knew anything about basketball came to the realization that thanks to Dolan’s meddling, the Knicks didn’t have the assets or pieces necessary to spin a trade for Paul. Free agency was the only market available to them and they made a huge splash by signing the prize center of free agency, locker-room leader and defensive stopper Tyson Chandler. The premise being that once the Knicks build themselves one of the NBA’s premiere frontcourt’s and establish a post presence and identity defensively, they can plug in the missing pieces at the guard position easily (guard has always been the more dominant position in New York after all).

In video games, the Knicks are now an incredibly difficult team to defeat. On the court however, the Knicks are a paltry 7-13 this season, are third in an abysmal Atlantic division, and perhaps most tellingly, 21-27 since they made the trade for Carmelo Anthony last season. Mike D’antoni has been given a pass for the team’s poor showings until now and is widely acclaimed as an “offensive genius” and is beloved by several of the free agents that the Knicks were heavily recruiting. Those recruiting classes have come and gone, D’antoni’s team is still losing, the defense is still a sieve despite the arrival of Tyson Chandler and “defensive coach” Mike Woodson, and his honeymoon with the New York fans and media is very much over.

The most unsettling part of this whole scenario for D’antoni? He’s tethered his coaching job to Baron Davis’s wagon. Yup, that Baron Davis.

Davis is in his 12thNBA season, only four of which he’s played in every game for. His injury history looks like a medical encyclopedia and his “lax” commitment to fitness and staying in shape has done him in before. He is infrequently motivated and is now thirty two years old.

Still, the Knicks biggest issues on the offensive end are the lack of chemistry between stars Amare Stoudemire and Carmelo Anthony. It’s the lack of chemistry and cohesion between Carmelo Anthony who is a black hole every time the ball touches his hands on offense, and D’antoni’s rapid ball-movement system. There is no continuity, on the offensive end and their stars can’t share the ball. When one is rolling, the other disappears.

Carmelo Antony is the only offensive player on the Knicks who creates his own shot, the rest of the squad (as well as the offense) is predicated in point guard play and the Knicks have built a roster without one.

Where to go from here?

D’antoni’s regime won’t continue for much longer if the ship isn’t quickly righted.

There have been rumored trades of Amare Stoudemire and Tyson Chandler to Orlando for all-world center Dwight Howard (I’ll gladly put down money that that trade will never come to fruition).