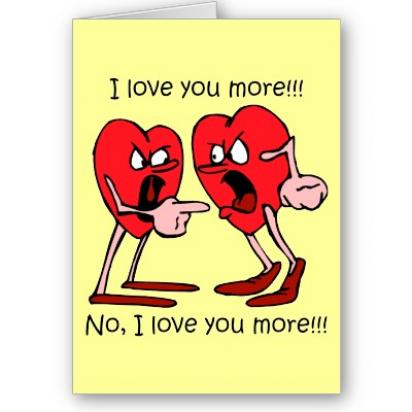 Now that we can put another Valentine’s Day behind us, I woke up that morning feeling extremely sad that it would be the last one for mankind. Since 2012 is the year that will bring about our demise, I pondered how I would send the day off with a bang.

This is how my day went.

First, I headed down to my local Wal-mart and knocked all the cheesy boxes of hastily rapped heart shape boxes of chocolate on to the floor. That’s right, just walked down the aisles with my arms extended… something like I saw Freddy Kruger do in one of his joyously murderous movies. There was a trail of red boxed hearts all over the floor behind me.

Of course, Freddy would have somehow found a way to use real hearts.

I was soon chased out of the store by workers banishing brooms, mops and those little hand held price scanners. I parked at the far end of the lot because I knew most of the “associates” giving chase would be out of breath and collapsing half way through the anticipated pursuit.

To my horror, one of them came close to catching me.

A deceptively quick, overweight woman that wore a name tag with the name “Peaches” on it. Funny, because Peaches did not look as if she had ever eaten fruit a day in her life.

At least that was not chocolate covered.

Luckily, I was able to fling one of the dozens of shopping carts that littered the parking lot like old tires on a physical training obstacle course into her path.

She sounded like an out of control steam locomotive as she wheezed, chugged and shook the ground with every step behind me.

Fortunately for me, I was able to derail her momentum with one of the aforementioned carts. It was not a pretty sight as she went crashing to the ground, her body intertwined with the mangled metal wreckage of the buggy.

I could have sworn I saw steam rising from her body and coal spread on the ground from the carnage that was Peaches. On second thought, maybe the coal was actually mini chocolate bars that had spilled from her pocket.

Once in my car, I sped through the parking lot and headed out onto the main road. I had to pull over and remove fragments of plastic from the scanners scattered across my windshield that were thrown by the associates that did not get as close to catching me as Peaches did.

By this time my feelings of love were in full bloom. I decided to go share them with my favorite traffic officer that always sat hidden in a group of trees with his radar gun blazing…waiting to pounce on unaware drivers like a fly in a hungry spiders web. I rolled down my illegally tinted window and sped past while blowing him a kiss. I feared that he might not have a Valentine and I didn’t want him to feel lonely on this special day.

As soon as I saw the clouds of tire smoke and road grime kicked up as his car wildly fishtailed from its cubby hole in pursuit, I pulled right over and waited for him. After all, I did not want to endanger the lives of anyone with a car chase down the main street that runs through Peekskill.

Very thoughtful of me, right?

I sat there smiling as he screamed at me loud enough that my ear drums pulsated. He wrote out so many tickets that I fear I’ll never be able to get car insurance again in the state of New York.

I told him how much I appreciated the job he does and how I feel so much safer knowing that he is so attentive.  I told him that God loves him and wished him a Happy Valentines because I know an A%%hole like him will probably be alone on this day.

With a smile of course, mama taught me to mind my manners.

Surprisingly, my new found municipal buddy let me leave the scene of my own accord. Along with a court date that he said he would look forward to attending. At least he managed to make a date that day.

Since I forgot to pick up a card for my darling Wilma for some reason while at Walmart, I decided to stop by the local grocery store and pick one up along with some flowers.

Wilma would be impressed with the amount of thought I put into thinking of her for this special day.

Later that evening, I take my girl Wilma out to dinner at TGIF. I weaved my way past the crowds of couples waiting to be seated while tightly holding Wilma’s fully inflated, stiff, but compliant hand. I approached the hostess and asked how long for a table for two.  “An hour or so” the puzzled young lady says. Great and I gave her my name and she nervously wrote it down on the pad of paper where she stood.

l walked back into the crowd of hungry lovers and begin subtly whispering sweet nothings into Wilma’s polyvinyl ears, while giggling in that special way lovers do.

Wilma looked more beautiful than any life sized blow up doll I had ever seen. Her long flowing blonde hair and beige flesh tone contrasted beautifully with her black evening dress, while the dull lighting of the restaurant reflected off her skin like a brand new Jacuzzi.

Looking at her in that moment, I knew that she was the one.

After a very gratifying meal, our mortified waitress sheepishly asked if we want to see a dessert menu. Wilma and I giggled to each other and say, no thanks we will have that at home.

Luckily this is 2012 and life as we know it is supposed to come to an end. Probably a good thing because I would hate to think that I would have to repeat this all again next year!