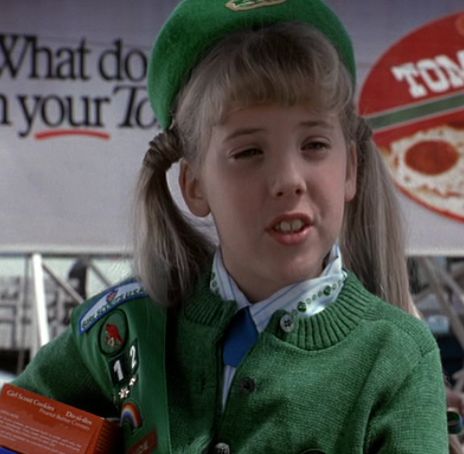 However, I was NOT mentally prepared for what I was going to witness.

Clicking the link brought me to a page on the Huffington Post’s website. In big black letters, above a stilled video, the heading said,

I immediately visualized an older woman, mother of a girl scout, in the middle of a rant while throwing cookie boxes across a room and was enraged at the notion that some woman would put her child through such a debacle. Why my mind thought the video was going to be along those lines, I don’t know. But, was I COMPLETELY wrong!

I placed my cursor over the play button and was shocked when I saw a young girl, a teenager, seated in front of the camera with handmade signs behind her saying “DISCOVER”, “CONNECT”, “TAKE ACTION” and “BOYCOTT GIRL SCOUT COOKIES! HonestGirlScouts.com.”

I thought, well maybe she is only seated to show that she is a girl scout and someone will appear and the rant will begin.

Once again, I was wrong.

The video began with the girl saying, “Hello, I’ve been a Girl Scout for 8 years, so why would I ask you to boycott Girl Scout cookies?”

So wait you’re telling me that you personally are advocating this cause? Is what I thought as the video played. I still couldn’t seem to wrap my head around the concept that someone of her age would be launching this boycott.

As I continued to watch the video, the young female began to explain her case.

“One reason, is that I have been taught by Girl Scouts to advocate for my beliefs and to discover, connect and take action when I see something that I want to change in the world. The problem is, what I want to help change is Girl Scouts. Right now Girls Scouts of the USA or GSUSA is not being honest with us girls, its troops, its leaders, the parents or the American public. Did you know that in October 2011 Girl Scouts admitted, they allowed transgendered boys from Kindergarten to the 12th grade.”

Wait. This girl is actually serious. She really wants me to boycott Girl Scout cookies because transgendered boys have been admitted into the organization.

At that point, I didn’t know if I was more disturbed with what was taking place or aggravated that this girl had filmed herself and placed it online for everyone to see.

“‘Ensure that no girl is treated differently, Girl Scouts welcomes all members regardless of age, race, ethnicity, culture, background, sexual orientation, gender.’ So Girl Scouts admits that different genders or boys can enter Girl Scouts and that they don’t require proof of their gender either. Then really, any boy can join Girl Scouts, by simply saying he wants to be a Girl Scout.”

I have a huge problem with her point during this section of her rant.

In the world that we live in, although sad to still admit, homosexuality has not been welcome with open arms. There are still thousands, millions of people who have not and will never accept homosexuality. So why would any person and their family place themselves in a predicament like this if not serious? I could not fathom the idea that males that do not classify, as transgendered would approach a GSUSA organization and “simply say he wants to be a Girl Scout.” I find it hard to believe that a male would desire to be around a group of girls badly enough to place himself in a situation where he would be ridiculed by people who don’t understand him.

She then goes on and finally gets to the point I was waiting to hear for 5 minutes, why she believes GSUSA is making this decision and why she is so against it.

“Unfortunately, I think it is because GSUSA cares more about promoting the desires of a small handful of people than it does for my safety and the safety of my friends and sister Girl Scouts.

I couldn’t put myself through anymore of her bigotry and refused to watch the remaining, almost, 2 minutes of the video.

The fact that she believes that the organization, one she and her family have been a part of for almost a decade, would put the safety of their members at risk to promote their own desires, infuriated me.

At that point, I wanted to buy as many Girl Scout cookies and throw them at the girl.

Then, I remembered, that my younger cousin is a Girl Scout. I called my aunt, ordered my cookies and then went around campus taking orders for other students who enjoy Thin Mints (and other cookies) as much as I do.

After seeing that video, I told my cousin, that as long as she’s a Girl Scout, I will assist her in selling her cookies on campus and wherever my life takes me after graduation.

I forgotten about this incident, seeing as how the video was posted in January, but then my order of cookies arrived and I remembered the rant again.

Needless to say, I have delivered the ordered cookies and anxiously wait the moment when I can enjoy my 2 boxes of Thin Mints!