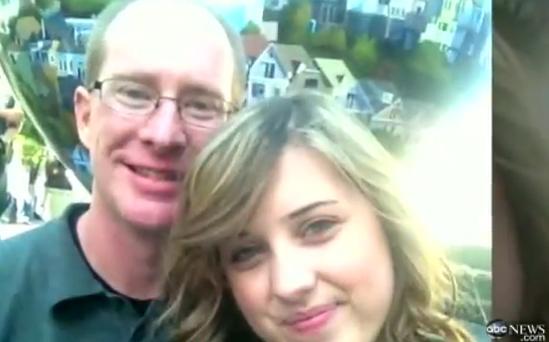 A California woman is livid and alleging abuse against a 41 year-old former high school teacher who moved into an apartment with her 18 year-old daughter. James Hooker, 41, left his job when it was revealed that he was in a relationship with Jordan Powers, 18. Hooker left his wife and kids for Jordan.

Jordan stopped attending classes and moved into an apartment with her former high school teacher. James Hooker claims that nothing sexual happened between them until she was 18 years-old. Jordan’s mother is not buying this claim and says he was an educator and he should have known better. Police began investigating when the relationship became physical. Jordan’s mother also says she discovered 8,000 text messages between the two, along with emails that were sent when Jordan was still a minor.

I think it is disgusting for this man to  even try to justify what he is doing, waiting  for Jordan until she was 18 doesn’t make it okay. I agree with Jordan’s mother. This man should have known better. He was someone that his young girl obviously looked up to, this 41 year-old man had no business texting his underage student 8,000 times if It had nothing to do with her academics.

In my opinion, Hooker took advantage of Jordan’s innocence and naivette.18 might make Jordan legal but the truth is at 18, Jordan is still a child in so many ways and she is an impressionable young girl just like every other teenage girl. If for some reason Jordan showed interest in her teacher, he, as an adult, should have done the right thing instead of leading her astray. He violated his job which was not just to teach his students but also to guide them accordingly and to look out for them. The whole situation only shows how sick this man is, This man must have psychological issues and should be examined. He  was attracted to a minor but for some reason it feels right in his head that he waited to sleep with her until she was 18,but the flirtation and whatever else was going on with them clearly started way before that and that’s not okay. And after leaving his wife and kids for his teenage student, clearly he has no moral bone in his body and could be lying about not having sex with Jordan before she was 18.

A student teacher relationship should be exactly that and nothing more. Jordan, her mum and Hooker appeared on the Dr. Phil show.  It was surreal watching the show and seeing this man talk about his love for his former student and it was so sad looking a Jordan, she looks like she could be Hooker’s granddaughter. I hope her mum can get through to her or that the police can find a way to put that man in jail, just so this young girl could live a normal live and enjoy her youth that this selfish man is clearly robbing from her.