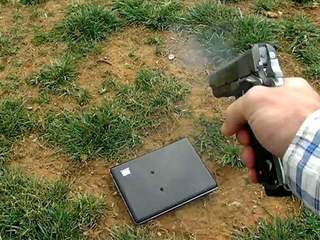 A man named Tommy Jordan from North Carolina recently posted an eight minute video that showed him shooting his daughters laptop after reading posts that his daughter had posted on facebook complaining about doing house chores.

Here is what the young girl Hannah posted.. “To my parents: I’m not your damn slave. It’s not my responsibility to clean up your [expletive]. We have a cleaning lady for a reason. Her name is Linda, not Hannah,” he read from his daughter’s Facebook page. “If you want coffee, get off your [expletive] and get it yourself. If you want a garden, shovel the fertilizer yourself, don’t sit back on your [expletive] and watch me do it. If you walk in the house and get mud all over the floor that I just cleaned, be my guest, but clean it up after you are done getting [expletive] everywhere. I’m tired of picking up after you. You tell me at least once a day to get a job.”

His daughter thought she had blocked him from viewing this particular post, but her father still managed to come across it as he installed new software on her laptop. This situation goes to show that Facebook and other social networking sites are not that private and people do need to be careful what they put out there in cyberspace.

This video has caused an up roar, but it is astonishing that some people are defending her father’s actions. Yes, his daughter was being completely disrespectful, not only to her parent’s and the cleaning lady, but most of all herself. It is true that sometimes tough love is the way to go, but even that must have limits. His message wasn’t entirely wrong but his deliverance was in poor taste.

In my opinion, the father acted even more childish than his daughter. As a parent he should have acted like the adult that he is and disciplined her in away that would have put his point across. This man not only humiliated himself but he publicly humiliated his young daughter. He totally used poor judgment in this situation.  I feel that his daughter deserved to be disciplined, but not in this way. I feel that he should have sat her down with him and his wife to settle the matter in a firm and mature manner rather than in a violent and public manner. This public outburst seems like it would warrant inappropriate behavior, not only in his daughter but other teens as well. In regard to parenting, this plan of action is not the way to go.

For this young teen to go on a rant on Facebook and the father acting the way he did conveys that things aren’t all smooth sailing in this home. The lines of communication have gone wrong at some point in time.

Since the unfortunate incident, the local police department and social services has visited their home and the father says “Yes they came, of course they came. They received enough ‘oh my god he’s going to kill his daughter comments that they had to. I knew that the moment it went viral, it was too late and it was inevitable.”