Your Get-Togethers Are Boring, Make Them Better 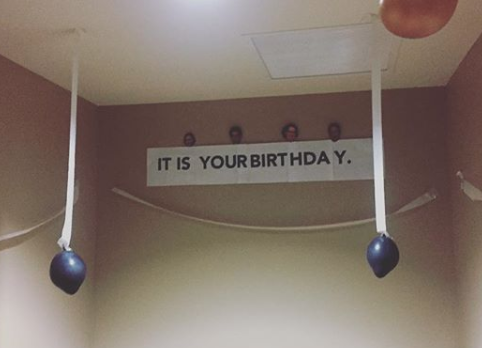 Most of the parties or gatherings I’ve been to in college have been absolute trash. Maybe I’ve been hanging out with the wrong friends, maybe I don’t know what’s cool or fun…. but I’m pretty sure college kids don’t care or know how to entertain their friends. At least not to my standards.

I’ve had so many situations where I’ve been invited to a “huge party!!!” and it ended up just being a bunch of kids who only halfway know each other sitting in a dimly lit room drinking cheap liquor and listening to a playlist only a few people are actually enjoying. The night is filled with awkward small talk and drunken annoyances, and you go home feeling like you would’ve had more fun watching Netflix alone.

If that’s your kind of good time, that’s completely fine. Low-key budget, low-key effort, high-key drunk. But are the rest of us supposed to be okay with calling this an awesome party? I don’t think so.

I do have a reputation of being the “mom” of my friend group, but honestly I think a few lessons in hosting and planning are in order here. It doesn’t have to be a Martha Stewart homemaker’s masterpiece, and no one’s getting any goodie bags to bring home, but here are some tips towards a more fun get-together.

1. Party with a purpose.

The best parties I’ve ever been to have always had some sort of activity planned. Game nights playing Uno, Cards Against Humanity, or even classic “party games” like Charades or Never Have I Ever are always a hit and give your guests a way to get to know each other and interact. Plus, they’re just fun. Another idea is to have a “Sh*tty Movie Night”, featuring cinematic masterpieces such as Troll 2, The Room, and Birdemic. If your end-goal is to get drunk off your booty, there are plenty of drinking games to go along with these movies. If you’re looking for something a little different, buy a bunch of facial masks at Walgreens and give each other manicures while chilling in your pajamas. Spa night!

Food is something that makes a gathering go from “meh” to “YEAH!” I know what you’re thinking though– I’m not expecting anyone to pay for food for all of their friends. We’re in college. We can’t afford that. But that doesn’t mean you can’t order a few pizzas or sushi and then have everyone who’s hungry Venmo you for it. If you don’t want it to be a dinner situation, have everyone who’s coming bring something simple to share like a bag of chips, cookies, soda, etc.

If you’re partying just to get messed up, this might not apply to you. But there’s been plenty of times where the only things to drink at a party are gas station Four Lokos and cheap Russian vodka mixed with juice from the cafeteria. You have the perfect opportunity to up your bartender game and make some decent drinks– and it might be a fun thing to do. There are plenty of lists online of simple and cheap cocktails to make for a party. And make sure there’s something for the non-drinkers to enjoy, so have some soda ready for them.

4. Not everyone loves your music taste.

I hate going to a party and hating the music being played. But how do you ensure everyone is happy with the selections when there’s so many vastly different music tastes out there? Something I suggest is just choosing a playlist on Spotify or Pandora that has “party” in the title. Simple, right? Another thing you could do is pass the aux around, but this doesn’t always work with every group of people. Funnily enough, playing early 2000’s throwbacks is usually something that everyone can get behind– plus you’ll get everyone singing along and sharing memories. Sounds corny, but it makes for a good time.

If you’re having a big get-together, oftentimes you might invite people that don’t know each other or members of different friend groups who don’t hang out often, so it’s your job as a host to make sure everyone knows each other and is comfortable to be themselves. There’s nothing worse than being invited to a party, not knowing anyone there, and then chilling in the corner by yourself having a crap night. Do your best to talk to everyone and make sure they’re having a good time.

6. Try not to reach maximum capacity.

I don’t know if this goes without saying, but if you live in a tiny single-person dorm room, don’t be inviting 20 people over when you only have one bed and one chair to chill on. Sometimes being a bit cramped is unavoidable, especially in college, but be mindful of not over-crowding your space too much. It gets hot and uncomfortable, and it sucks when not everyone has a place to sit.

7. Even if it seems silly, it could be the most fun you’ve ever had.

Don’t be afraid to get creative in finding things for you and your friends to do when you get together. On my 21st birthday, my friends threw me a The Office themed party and held an awards ceremony (The Dundies, if you watch the show) for our friend group, handing out little trophies for inside jokes we had. It may seem silly on paper, but it was so fun and honestly the best birthday I’ve ever had.

Obviously you don’t have to follow all these guidelines. You might throw awesome parties and have a good time doing the exact opposite of what I said here. But if you’re looking to improve your hosting skills and provide a good time for all of your buds, start with some of these things.

All in all, the most important thing is just to have fun and enjoy the time you’re spending together. Good luck entertaining!