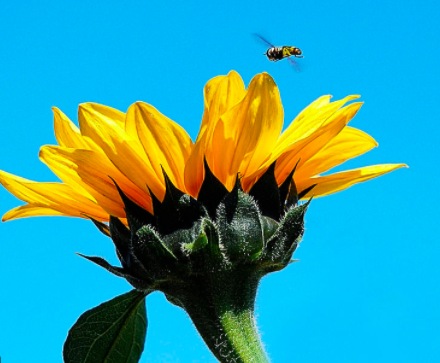 The eager bee never misses his date with a perky flower.  He buzzes around the yard searching for one for the afternoon. It was not the red beauty queen rose or the proud white calla lily he longed for. It was the bright innocent yellow sunflower that caught his attention. Beautiful in her own way, the humble flower only gets the spotlight when the sun is out. She notices her admirer, giggles and undresses for taking. For a moment in time, they have become one. The grateful bee then collects nectar and leaves for a long day of work.

That’s right, this is about how I lost my virginity. This story has haunted my past for years because it isn’t a cute little love story about a bee finding its beautiful sunflower, it’s a story of ultimate betrayal, shame, and heartbreak.

So, it started when I was 15-years-old. I was a freshman and he was a junior, but he was in my gym class. He was on the football team, so you know how impressive that can be to a naive young girl. We’ll call him James.

I was painfully shy and barely had any friends. I loved my chorus class, my honors English class, and the dance classes I’d attend on the weekends. I never had a real boyfriend, but I would always imagine it being something spectacular like the movies or the songs on the radio. I blame it on the movie “16 Candles,” the story of a timid girl whose family forgets her birthday and then a handsome jock comes to her house with a birthday cake after falling in love with her.

That was all far from my reality. James got my number and we texted for a few weeks, he’d flirt with me in gym class in front of all his friends and I was flattered but so shy and too naive to understand that he was just running a game.

One day he asked me, through text, to come and meet him to have sex. I replied, “but I’m a virgin,” and we talked some more and somehow his charm convinced me to agree. I wanted to be truly liked by this boy, these were emotions I had never felt before.

I snuck out of my house on that cold, foggy Friday evening and met him at a cemetery, then we walked to his friend’s apartment. The Weekend played in that dark room and with a soft grin, he asked me if I was ready. Things began to heat up quickly.

I had imagined sweet and gentle caresses from someone I loved and trusted but I exchanged it for fast and confusing thrusts from a stranger I longed would one day like me. Just like that, in a quick 15 minutes, my white virgin dress turned red. He kissed me in the living room and I told him I’d forgotten my jacket. He looked flustered and said, “I’ll go in there and get it don’t worry.” Then he and walked me halfway home.

I felt like I was in a dream, I had never let anyone touch me like that and even though it was not like I had imagined it to be, I was willing to settle for it. That was until I went to lunch Monday morning. I walked in and felt everyone’s eyes glued to me and my every move. Whispers and laughs surrounded me. My friend quickly told me to meet her in the bathroom, so I followed, really confused.

She looked me in my eyes and asked: “did you have sex with James?” I was so confused because I hadn’t told a single soul what happened, but I replied with a smooth, “yeah.. why?” Then she said, “well you were being recorded and boys were showing the video at the baseball field, it was also being sent out to people in school.”

That’s when my heart sank and a big cloud of shame came over my head. Apparently, he had a few of his friends hiding in the closet, recording my very first sexual encounter; my first time made public for everyone to see.

She came home with me and helped me tell my parents. They didn’t take that lightly. They shamed me about it, told me they didn’t know who they raised or why I represented them in that way. I remember my mother looked at me and asked why I wasn’t ‘prudent.’ My father couldn’t even look at my face. I felt like an embarrassment.

We filed a police report, which never amounted to anything. Then my parents took me to talk to the principal of my high school. I had an uncomfortable conversation about what happened while tears ran down my face. The administration did nothing. There was no form of punishment and no way to protect me from the bullying I endured. And how can you stop teenagers from what they say anyway?

It was like everyone had this false narrative about me. People thought that I knew they were recording, that I was this ‘freak’ who wanted the attention. Little did they know, it was my first time even being completely naked in front of the opposite sex. It became my identity, people knew me as the girl with a sex tape. It was like I had a scarlet A on me.

I was severely depressed for months after. My days went from colorful to black and grey. I quit dancing and I rarely left my house. I also started a nasty cutting habit. I hated myself. I was isolated and deeply hurt. It was like I let this one mistake define me. James went on to date other girls and treated them very well.

Those boys never talked to me again. After a few months, James texted me a long paragraph about how sorry he felt for what he did to me. He told me how there were nights he couldn’t sleep because of all the guilt he felt and how he didn’t talk to me because he had lawyers advising him to have no contact with me. A young Val accepted his apology right away. I told him that I appreciated him saying that after all this time and that this whole thing really hurt me but that I had moved on and was doing better.

I appreciated his words, but I didn’t fully understand the psychological damage he had done. This was my first time and it was broadcasted to the world without my permission. On top of that, it made me hate myself and my sexuality. Guys would approach me thinking that I was ‘easy.’ I felt like I wasn’t worth anyone ever taking me seriously.

After a while, I just became that ‘freak’ and started owning the narrative everyone wanted to paint me as.

Now at 21-years-old, I just want to hug my younger self and tell her that everything is going to be okay. I had nothing to feel ashamed or embarrassed about because I was a victim. I would tell her to love herself first and not to worry so much about what people think of her because that nightmare would soon be over.

I rarely think about that time in my life because I feel I’ve come so far from it. It doesn’t hurt me anymore and to this day, I don’t hate James. I think that this situation taught me so much about myself, my inner strength, and who I can trust.

I made so many supportive friends that would help me on the days I was down. One of them being my neighbor, Jade. I remember, she would walk to my house when I was grounded just to sit with me as I cried and ranted to her about all my emotions. She’d hug me and make me laugh with some silly impression or make me sing different Taylor Swift songs for her while she lip sang pretending to be me. I don’t talk to her much but if she’s reading this I want her to know how much I love and appreciate her for being there for me in a really dark time in my life.

My first time wasn’t ideal or fairytale-like, but if I could rewrite the narrative, it would be something like this:

The proud bee never misses its date with a perky flower.  He buzzes around with his colony of busy bees to find his nectar for the night. It was not the red beauty queen rose or the proud white calla lily he longed for. It was the bright innocent yellow sunflower that they felt was the easiest to catch. Beautiful in her own way, the humble flower only gets the spotlight when the sun is out. She notices her admirer, giggles and undresses for taking. The eager bee collects its nectar with his chest high for his colony to see and leaves for a long day of work, never to return. The abandoned flower slouches filled with shame and gloominess.

But the sun rises again, and so did she.