How I Fell In Love With Pro Wrestling

I was only eight years old when I started to watch pro wrestling.  My father had turned it on for me one day and I still remember being so scared of watching the Undertaker come out when all the lights would go off and the whole crowd would go silent.  The first match I ever watched on TV was on Smackdown and it was the Undertaker against Batista.

I remember just from that point on I was absolutely obsessed with WWE and that was basically my whole life as a child.  I always dreamed of one day becoming a pro wrestler.  Those guys such as CM Punk, John Cena, Jeff Hardy and more were all of my idols growing up, and they still are.

Seeing them still doing what they love at the age that they are at now is so inspirational because you see these older guys that still have the drive and the power to go through all of those injuries just to put on a good show for the crazy fans watching either in attendance or at home.

Growing up I used to ask for tickets to go to every wrestling event even if it was far away because that is all I wanted for Christmas.  I feel that I fell in love with wrestling because of the escape that I felt when watching the shows every week.

Every Monday, Friday, and some Sundays, I would always feel like everything else that I had going on did not matter and that I was just able to focus on something that I was really enjoying.  It would give me the same feeling that I would feel while I was playing sports and that is still how I feel when I get to just go practice or play a game for a few hours.

I was able to go to two Wrestlemanias as a child and I also have been to multiple other shows and watching it live in person really made me also respect the other people that work besides the wrestlers.  During each match there are so many people that have to work on changing the mat, the cameras, the announcers, the lighting and anything involving the production of the show.  Those workers definitely do not get enough credit for all of the work that they also put in to create such a memorable show for the kids that go to see a good product and have a good time.

I have not gone really through any period where I stopped watching because it has always been there to make me smile and realize there is always something to look forward to during the week.  The wrestlers that try to make the fans experience the best possible experience that they can have is the reason that I think I fell in love so easily and I feel like these guys that I don’t even know are my family.

my favorite wrestlers, John Morrison, and I was so happy that he made me feel like he knew me my whole life.  I asked him to sign my championship belt and he did it with no hesitation while also taking a picture with me which made my whole day and really whole month just based off of that one picture.

I also got to meet one of the WWE legends Ric Flair who some would say is on the Mount Rushmore for WWE wrestlers.  Meeting him at an older age was really eye opening because I was able to have a real conversation on more than just wrestling and on a personal level which gave me a different view on these wrestlers that I really respect. 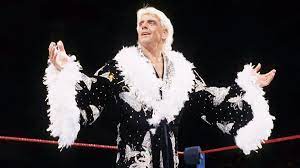 The way that so many people I know, no matter the age that they are, fell in love with wrestling just like me and have not looked back makes me happy because I know that even though we all get older our love for it will not die.