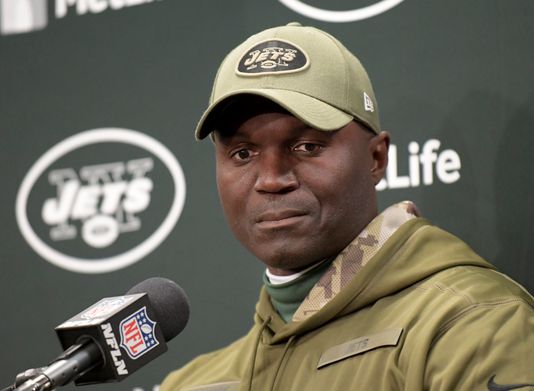 Fans of the New York Jets are suffering once again. The Jets currently sit at 3-7 and have lost four straight games heading into their bye week.

Many of the Jets long suffering fans are blaming Todd Bowels, the teams Head Coach, for the players all around lack of effort.

Bowles took over as Head Coach for the Jets in 2015, after the team fired former coach Rex Ryan. In 2015 Bowles led the Jets to a surprising 10-6 record, and the team missed the playoffs by one game.

After a promising first season, it has been all downhill since then. The Jets finished 5-11 in 2016 and 2017, and are on their way to yet another terrible season.

One of the most disappointing notes about the current season for the Jets is their utter lack of weapons, as well as their inability to put any points on the board. They are currently 29th in yards per game with 299.4, and are 23rd in total points per game with 20.8.

In their 2016 and 2017 seasons, the Jets were abysmal on offense as well. Throughout both seasons, they were near the bottom of the league in both yards per game and points per game.

It would be beneficial for the Jets to move on from Todd Bowles and hire an offensive minded coach as his replacement.

In recent years, however, the Jets have not been known for having a high scoring offense. This could be attributed to the fact that the Jets have not had an offensive minded head coach since they fired Rich Kotite after the 1996 season.

Now is the time to change that. The Jets have a young Quarterback in Sam Darnold, as well as 95 million in cap space heading into next season. This money should be spent on offensive weapons at the Wide Receiver position in order to help Darnold grow and become a more confident QB.

The best way to utilize any offensive weapon, is with a strong offensive minded head coach. There a few offensive coordinators around the league that would be a perfect fit the Jets and their franchise QB.

Although LaFleur did not call the plays for the Rams in 2017, he did work extensively with QB Jared Goff. Goff would go on to throw for 3804 yards and 28 touchdowns during the season. He also finished the 2017 season at fifth in the league with a 100.5 passer rating.

LaFleur also served as the quarterback coach for the Atlanta Falcons for two seasons, and prior to that he worked for the Washington Redskins in the same position. During his time in Atlanta, QB Matt Ryan won the NFL’s Most Valuable Player award and the Falcons offense was one of the best in the league.

John DeFilippo is another candidate that the Jets should consider. DeFilippo has spent two seasons as the quarterback coach for the Philadelphia Eagles, and was instrumental in the development of QB Carson Wentz. DeFilippo is credited with helping to build an offense around eventual Super Bowl MVP Nick Foles after Wentz went down with a torn ACL late last season.

DeFilippo is now serving as the offensive coordinator for the Minnesota Vikings and is calling the plays for Vikings head coach Mike Zimmer. The Vikings offense is averaging 374.3 yards per game, along with 24.6 points per game.

Both LaFleur and DeFilippo could help bring the Jets back to relevancy in the NFL by working with Sam Darnold and turning him into the franchise QB this team and its fan base has been waiting for since Joe Namath left after the 1976 season.

However, the Jets will not make it there under head coach Todd Bowles, who has been given the benefit of the doubt over the last three seasons.

It is time for the Jets to move on and hire a head coach that can work with Sam Darnold and help turn this offense into one that can actually put points on the board.