Over 300 prospects will compete at Lucas Oil Stadium in Indianapolis. 55 of them are wide receivers, the most for any position this year. Seven of them going in the first round is a possibility. 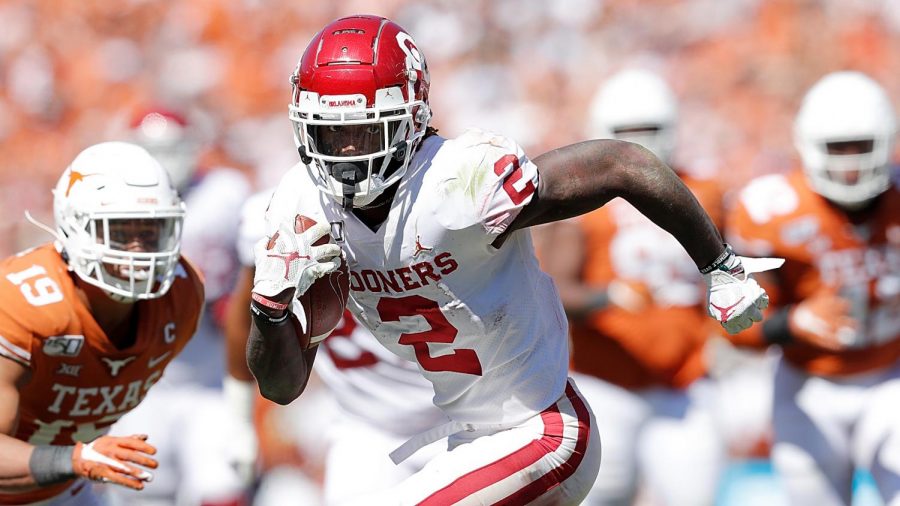 The scouting combine officially begins with the on-field workouts tonight in primetime.
Watching the underwear Olympics for the NFL sounds silly, but 337 NFL draft hopefuls put their future careers and livelihoods on it with money on the line. After the collegiate football season, players are eligible for the draft train for the combine, while also attending collegiate all-star games like the Senior Bowl and Shrine Game.

Trying to predict the first 32 picks is a crazy chore with NFL free agency around the corner and the NFL Draft still months away.

A mock draft is for discussing scenarios on matchmaking players to teams in the chronological order of the teams picking. Mock drafts also predict which players are at the top of their class. Even well-renowned draft experts like Mel Kiper and Todd McShay barely get double-digit selections correct every year as an inexact science.

The Scouting Combine is a four-day event that will experience some changes this week, as the drills now begin during a prime time slot (4-11 p.m.) instead of the normal 9 a.m. showing on NFL Network. 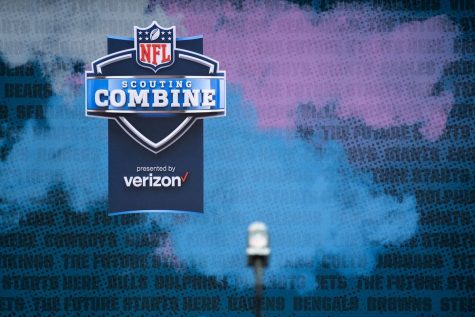 The on-field workouts are different this year, as the program added 16 new drills for the players to partake in this weekend. The combine is innovating each year with an increasing amount of fan interest. Even though they have initial weigh-ins for every player, the new agenda includes another weigh-in right before each player runs their 40-yard dash.

The most important thing inm this process, however, is the interviews the players have with teams and the medicals they go through at differing levels. This is where the teams can learn more about the players mentally and what makes them tick. Scouts can watch the film on a prospect any day, but meeting the participants of the combine is crucial to the decisions each team has to make.

This is the chance for a coach to get to know a player as a person outside of football and how they react to certain things. The combine is very nitpicky overall and while it can go a little too far, it is appropriate for the most part. Teams are gambling their future success on the potential development of who they select in the NFL Draft, potentially costing them jobs if they fail.

The main scenario that occurs in this mock draft is the possibility of seven wide receivers getting picked within the first 32 selections. This would tie for the most at the wide receiver position since 2004. Even though it sounds outlandish, it is just a testament to a potentially historic receiver group and the amount of depth there is at the top and throughout all seven rounds.

With the combine coming up tonight, I lay out who I think each team could take in the first round. Even though there will be trades before draft day, this is just my prediction as to who they should take at this time. This mock draft was done via The Draft Network.
1. Cincinnati Bengals- Joe Burrow (QB) LSU 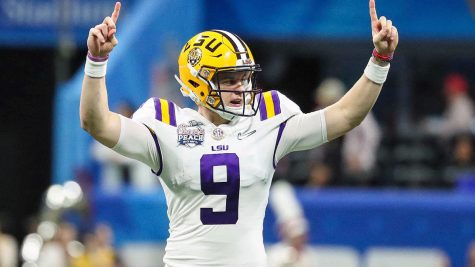 Burrow had one of the best, if not the best, collegiate seasons for a passer ever with LSU after transferring from Ohio State in 2018. That should be enough to cement the status of the former Heisman Trophy winner as the franchise quarterback for the Bengals, with Andy Dalton likely out via trade.

2. Washington Redskins- Chase Young (EDGE) Ohio State
Even though Young may not be as technically sound as the two Bosa brothers (both went top five in their respective drafts) coming out the past few years, “the predator” definitely has the tools and the ceiling to be another perennial all-pro pass rusher as the complement to Montez Sweat. The Heisman candidate from 2019 missed two games but still broke the all-time sack record at Ohio State. 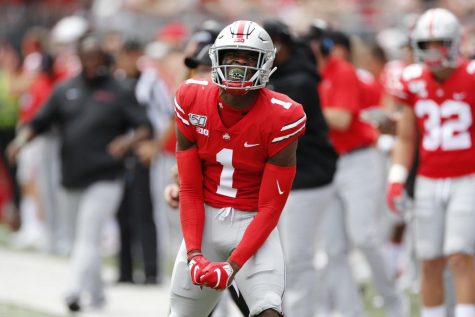 Following the likes of Denzel Ward and Marshon Lattimore at Ohio State, Okudah could be the next shut down cornerback for a defense that needs one badly. The Lions, whether they keep Darius Slay or not, should want a sticky cover corner that has the potential of locking up the league’s best pass-catchers using his unreal length and speed. 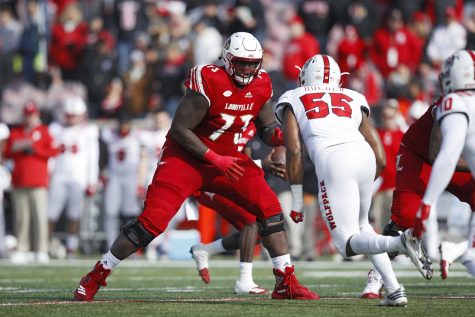 4. New York Giants- Mekhi Becton (OT) Louisville
If there was a hog molly in the trenches that would make general manager, Dave Gettleman swoon over, Becton would be the one with his massive size but nimble feet. At 6 feet 7 inches tall and 364 pounds, the Louisville tackle is the heaviest offensive lineman at the combine and despite his lack of technique at times, he is a monster of a man that can play on either side. 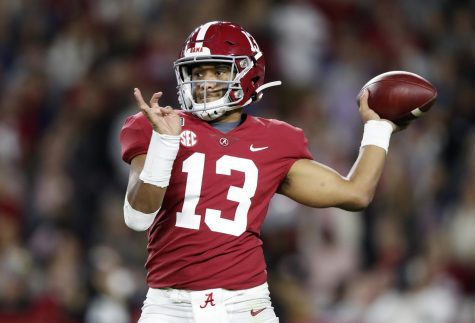 5. Miami Dolphins- Tua Tagovailoa (QB) Alabama
The Tank for Tua sweepstakes took an unexpected turn in 2019, as the Dolphins started winning games at the tail end of last season and Tagavoiloa suffered a season-ending hip injury. The pair could still be a match if he lasts this long, as the talented Alabama quarterback can sit behind Ryan Fitzpatrick in 2020. 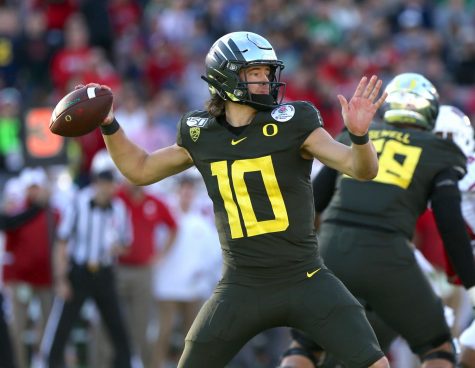 6. Los Angeles Chargers- Justin Herbert (QB) Oregon
The Phillip Rivers era with the Chargers is over, as he is now a free agent entering the offseason. Former backup Tyrod Taylor can be the bridge to a young rookie, as Oregon quarterback Herbert could be the passer they are looking for with the size and physical tools (but needs to work on his decision-making in the NFL). 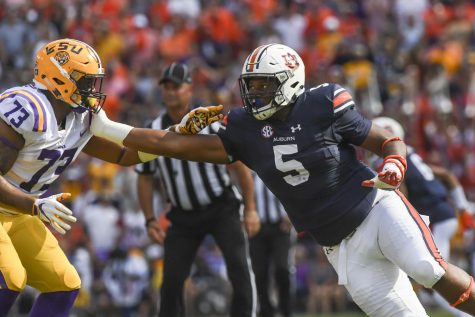 7. Carolina Panthers- Derrick Brown (IDL) Auburn
Cam Newton is the Panthers quarterback (for now), as he is coming off an injury-plagued 2019 season. Adding Brown, another Auburn prospect, to their defensive line would help fix a big weakness up the middle as a well-rounded run defender.
8. Arizona Cardinals- CeeDee Lamb (WR) Oklahoma
Kyler Murray gets to pair up with his old teammate, as the Cardinals could select Lamb to help boost their passing game. The Oklahoma receiver should be the top pass catcher, as he catches pretty much anything and the only thing that is uncertain is his deep speed. 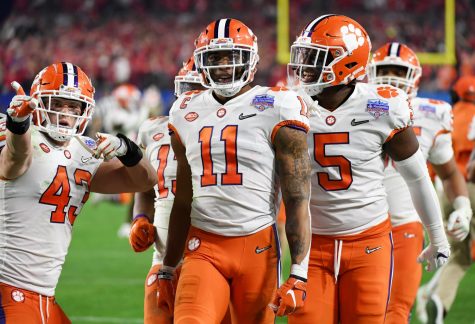 9. Jacksonville Jaguars- Isaiah Simmons (LB) Clemson
Known as the mismatch “eraser,” Clemson linebacker/defensive back hybrid can play anywhere the defense wants to deploy him. The Jaguars could use a versatile weapon in the back of their defense as a sideline to sideline defender. 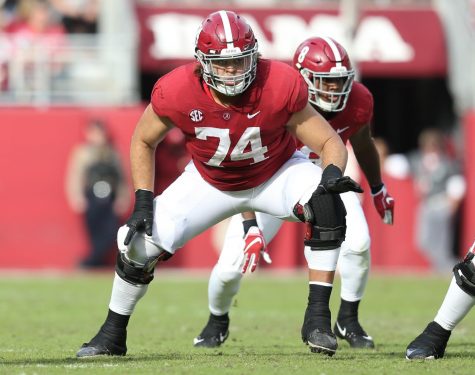 10. Cleveland Browns- Jedrick Wills (OT) Alabama
The Browns got someone to protect Baker Mayfield, as he was a consistent right tackle at Alabama. Wills is smooth in pass protection, in terms of technique, and is nasty as a mauler in the run game. 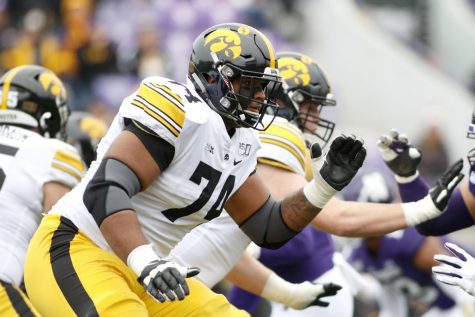 11. New York Jets- Tristan Wirfs (OT) Iowa
Some may think Wirfs fits better at guard but the Jets should try him at tackle first to protect Sam Darnold. Coming from Iowa, he is an athletic blocker at every phase and can play on either side. 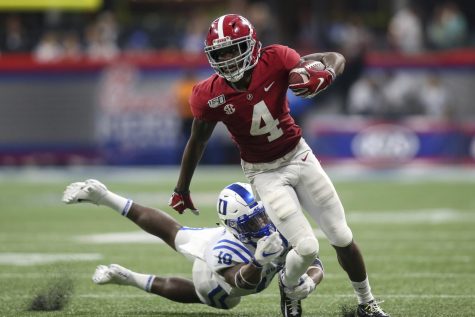 12. Las Vegas Raiders- Jerry Jeudy (WR) Alabama
The Raiders get one of the best route runners in this draft class, as Jeudy will break some ankles at the next level. The 2018 Belitnicoff winner (award to the nation’s best receiver) was deadly out of the slot as an explosive playmaker for Alabama. 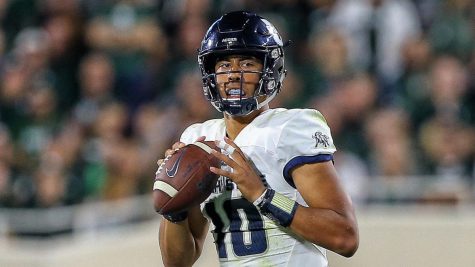 13. Indianapolis Colts- Jordan Love (QB) Utah State
Even though I can see a free agent quarterback coming to the Colts, I think they will look for a rookie quarterback early either way. Jacoby Brissett was not bad last year but I think his future with the team is up in the air as Utah State passer, Love, could intrigue them enough to bank on his big arm and upside if he can clean up his turnovers. 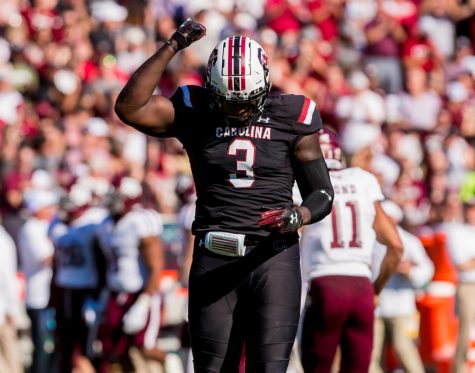 14. Tampa Bay Buccaneers- Javon Kinlaw (IDL) South Carolina
The Buccaneers could pair Vita Vea with an athletic interior pass rusher with length and upside in Kinlaw. The adaptable defensive lineman from South Carolina does have injury concerns but if he is cleared by teams, I could see him rising up boards as he was unblockable down in Mobile, Alabama at the Senior Bowl last month. 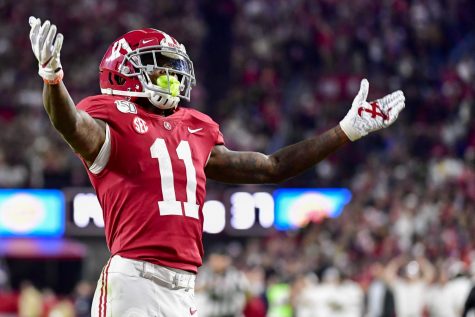 15. Denver Broncos- Henry Ruggs III (WR) Alabama
Drew Lock throwing too deep to a speedster like Ruggs seems too good to be true. The Broncos are getting someone who defenses have to always account for and the Alabama receiver is more than just a deep threat. 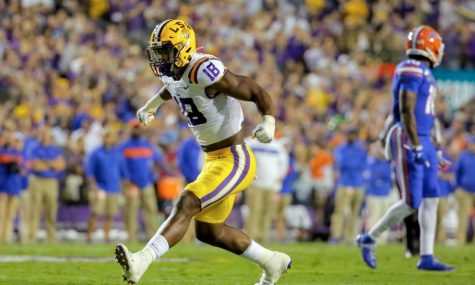 16. Atlanta Falcons- K’Lavon Chaisson (EDGE) LSU
Falcons fans might be wary of a twitchy pass rusher in Chaisson but he showed great motor defending the run game and possesses an unreal burst of the line. The LSU defender even has some ability to cover, as he can pair with Takkarist McKinley off the edge.
To see part two of the mock draft, click below.
Mocking the 2020 NFL Draft Part 2: Trio of LSU Tigers Wrap Up the First Round.