The NFL is Full of Divas 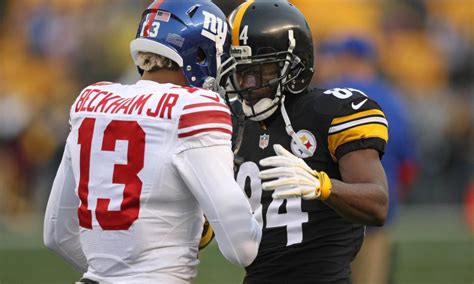 In the NFL, there are players who are filled with emotions and express their emotions on the football field. Sometimes this is a good thing because it shows that these players are passionate about their team and want to be successful. Certain players take the emotion to an extreme and it sometimes has a negative effect on their team.

One player in particular is Odell Beckham Jr. Over his five year career Odell has caught 40 touchdowns and has over 5,000 yards receiving. He is on an unbelievable pace and is quickly becoming one of the best wide receivers in football.

Odell has been a stud on the football field but has also been somewhat of an issue on the sideline and lockeroom. In interviews he has said that he is not having fun playing the game of football. This is because of the giants struggles on the football field. The giants were 3-13 in 2017 and are now off to a 1-6 start.

Odell has also expressed his frustration on why the giants can not move the football efficiently. These comments are not helpful especially for a veteran quarterback struggling. When a team is struggling it is important to stay positive and back up your players even if they are struggling. Odell lets his diva side get the best of him and it results in him flipping a bench or screaming on the sideline.

Odell is the best player on the giants. There is no debate there. When a player of his calibers behaves the way that he is other players will follow in his footsteps. Wide receiver Sterling Shepard was yelling on the sideline flipping benches just like Odell was. This is not the example that Odell needs to be setting. He should be focusing on football and getting some wins for his organization. He just got paid this offseason and its time to put his money where his diva mouth is.

Another wide receiver who is arguable the best at his position is Antonio Brown. Antonio Brown has eclipsed over 10,000 yards and 65 touchdown in his career. Brown is a great wide receiver and has been with the Steelers his whole career. During that career he has also show that he is a diva.

People have tweeted at Antonio Brown in a negative way often. One person tweeted that Brown is a no-ring puissant and a douchebag. There is no reason why this twitter user should be tweeting this at Antonio. He has to understand he is a popular and talented professional athlete and attention will be on him at all times.

There is no reason to respond to this negativity. Brown responded by saying “have some respect you making shit up clown”.

By responding you are giving people what they want. They want to get under your skin and that is exactly what happened in this situation. Another twitter user tweeted at Brown and said that he would not be the player he was if he was on a different team.

Brown responded by saying “trade me and we will find out.”

The confidence that Antonio Brown has in himself is very good. It is good to be confident in your ability to play the game of football, but that response is not something he should of said. A response like that creates skepticism.

Does Brown want to be traded? Is he unhappy with the Steelers organization? His teammates might think that and this could create a chemistry issue in the locker room. Brown should not be focused on social media. He should be focusing on the Pittsburg Steelers organization and helping them win football games.

Antonio has also vocalized frustration by screaming and throwing rants on the sideline much like Odell Beckham Jr. This needs to stop if these talented wide receivers are going to be successful in their careers.