Chronicle Improves From Beginning To End 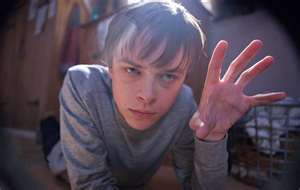 Andrew Detmer, Cousin Matt Garetty, and highly popular Steve Montgomery find a bizarre hole in the ground one evening, and like any other teenager would, wander around only to find an unexplainable site that would later lead to telekinetic powers.

At first, using these powers seemed pretty cool to them and I would act the same way as they did with using the powers to mess with citizens around the town.

There is a subplot about Andrew having a crappy life, his dad is a complete drunk and his mother is slowly getting sicker and coming closer with the final moments of her life.  With no friends, these powers made him gain popularity which is thrilling, until he realizes that his friends seem to only be by his side due to the powers.

I wont go further into the plot than that, just because I would be ruining the rest of the film and who wants to be that guy who blabs out the whole movie to his peers.

Now here is that part of the review where the breakdown of the elements of the film come in:

Overall it was a good movie with the plot they had going.  You know, “the depressed kid with superpowers finally makes friends but ends up snapping” type of film. It was a cheesy movie in the beginning especially with the film entirely being in first person, however it got better towards the end especially when they…oh wait I forgot, cant ruin the film for you ladies and gentlemen.

Special effects were pretty cool coming from a kid like myself who likes the Michael bay type effects, you know everything blowing up, loud noises, transformers taking over the city with Megan Fox…oh wait wrong movie.

Overall with out saying more I give this movie a 4 out of 5 stars, only due to the fact of lack of explanation, however it makes you think, what if I had super powers?