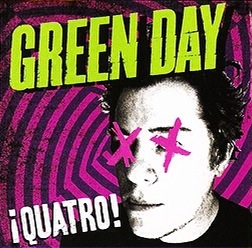 On Wednesday November 28, 2012, Green Day’s Quatro! aired on Vh1. Quatro is the forthcoming documentary to Green Day’s Uno! Dos! ,Tre! album trilogy. It captured the recording of the three albums.Before embarking on this ambitions run, Green Day returned their act back to the intimate clubs and small venues they technically outgrew decades ago. “Playing clubs is really important to us because it just keeps us energized,” Billie Joe Armstrong explains of the shows that helped them shake of any dust and work out the kinks after so many years of performing together. “We needed to scare the sh*t out of ourselves a little bit.

”What resulted is an album that’s the sum of everything Green Day has ever done, but “brand new,” too. “There’s things that this band can do, and that Billie can do as a songwriter, that people still don’t know about. It’s everything thrown in there from the band’s entire career, but it’s brand new,” the band explains. It also showcased the band playing live. Here is some of the footage.

Here is the full Documentary