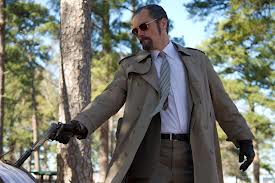 The true story of Richard Kuklinski, is the notorious contract killer and family man. When finally arrested in 1986, neither his wife nor daughters have any clue about his real profession. This is Rumor Control, here are the facts! It’s sad that in this day and age there are some pretty good additions to the crime genre that seem to go unnoticed and under the radar. I remember three years back when Kill the Irishman came out and I was anxious to see it, due to its stellar cast. Sadly, it tiptoed into theaters and quickly stormed out. The same goes for The Iceman. What’s that? You’ve never heard of it? Well can’t say I’m not surprised, it had a very limited run last year and was only released on video back in September. It’s a shame because right here may be one of the more disturbing tales in the annals of crime cinema in the past few years.

The story for The Iceman is one that’s very unnerving and unsettling, but all the while feels rushed. The story follows Richard Kuklinski, a hitman for the mob who recants his life starting from the moment he met his wife. The films does a good job of setting up the character of Kuklinski, showing the type of person he masquerades as when in he is in the presence of his loved ones, but quickly follows suit in a quick, but effective scene of Kuklinski’s violent, remorseless nature. It isn’t long before Kuklinski is married and has a job working for his first boss Roy Demeo, but herein is the rushed aspect of the story. We are shown plenty of Kuklinski in both his life as a family man and a murderer and thus get to know him and his story very well. That’s all fine and good, however it seems like all the other important people in his life are introduced but quickly pushed aside in favor of more time with Kuklinski. As such, other characters and events surrounding those characters come off as forgettable, which lessens the emotional impact they leave. There’s a father/son relationship between Demeo and his right hand man Josh Rosenthal, but that’s only mentioned in passing rather than established through time and development. Even the ending comes off as a rushed, feeling as if the film is anxious to get to the end credits rather then slowly build up to what it has. What we get with Kuklinski is engaging, it’s interesting to see Kuklinski live his double life which in turn made me root for him from time to time. Kuklinski is strong enough to carry the film himself however the lack of the time and development with the side characters does hurt the film. One thing that does work in the film’s favor is the tone. For the most part, the tone is pretty standard for a crime film, just about what one would expect even. However, after Kuklinski meets Mr. Freezy, a fellow mob hitman, the film takes a darker turn. To see Kuklinski’s new M.O., to see his uncaring attitude towards the grisly things he must do is very unsettling and downright disturbing. It’s this portion of the film that left it’s mark on me, one that made me remember and made damn sure I wouldn’t forget any time soon. Overall the story does feel rushed which hurts the film but Kuklinski’s life is one that’s very interesting and entertaining to behold.

The characters for The Iceman are mostly weak due to the main focus being Kuklinski.

The character of Richard Kuklinski is one that’s engrossing. It really isn’t his life as a hitman that captivated me, though it was one that caused me to feel intermittent, but his life as a husband and father. It’s this life that gives the character depth and likeability, to see that he truly loves his family and would anything to protect them caused him to have some sympathy. Not only that but he establishes that he doesn’t kill women and children and though that code may seem like small potatoes compared to his 100+ victim count but I always found a killer with morals to be one that’s engaging and likeable.

As for the rest of the characters there’s not much to say. They come. They go. They hardly do anything to leave their memory. That is, of course, except for Mr. Freezy. Freezy is a stark juxtaposition to Kuklinski. Though similar in the way that he’s remorseless in his killing, Freezy doesn’t have that same moral code that Kuklinski does nor that tender side of him when it comes to his loved ones. Freezy is just a twisted, dark, violent SOB of a character and though I dislike him I can’t help but admit that he was still a memorable and frightful character.

Acting for The Iceman is strong.

I haven’t seen much with Michael Shannon. In fact, I’ve only known about him for over a year now. In the time since I’ve discovered this actor, I’ve found him to be hilariously entertaining, with his over the top personality and the fact that he hams it up every single chance he gets. I didn’t see that Michael Shannon in this film. No, this was the “Holy crap this guy is incredibly scary I would have a heart attack if I saw him under my bed” Michael Shannon. Shannon doesn’t act over the top, he doesn’t ham it up, he isn’t funny for a moment. Shannon plays the character dead face serious and is effective from start to finish. Even in moments when he’s being kind and loving he still manages to send a shiver up my spine.

Chris Evans is unrecognizable throughout a majority of the film. Perhaps it’s his equally terrifying performance as Mr. Freezy, to see him serving ice cream to children while he has bloodied corpses in his truck… Or perhaps it’s because Evans manages to become his character, adopting long, scraggly hair and a beard. It’s only in his final moment that I realized that Freezy was Evans, only because he cut his hair… That dark, twisted personality still remained.

Winona Ryder is entertaining in every scene she’s in. She easily manages to captivate and grab my attention whenever she’s on screen. She works very well alongside Shannon creating for a great duo in tender scenes as well as more dramatic ones.

Ray Liotta feels like he’s phoning it in. Perhaps it’s because he doesn’t have much to do, perhaps he’s just a novelty to the film makers. Whatever the case may be Liotta’s performance isn’t all that strong. From time to time he can be but there isn’t enough for him to do to make himself memorable.

David Schwimmer plays Josh Rosenthal… He does a pretty good job but like Liotta there’s not a lot for him to do… I just find it really interesting that David Schwimmer is in a film that requires him to kill people and swear.

Final Thoughts: The Iceman is a pretty good crime film. The story is rushed at times causing for a not too strong ending and weak secondary characters. However the character of Kuklinski is strong enough and engaging enough to carry the whole film, the story can be very dark which causes it to be effectively unsettling and disturbing and the acting for the most is a solid especially from Michael Shannon as the titular character. In the end I may only be able to recommend this for fans of the crime genre but if you’re interested then by all means give it a watch and have fun trying to go to sleep tonight!

That was Rumor Control and those were the facts!