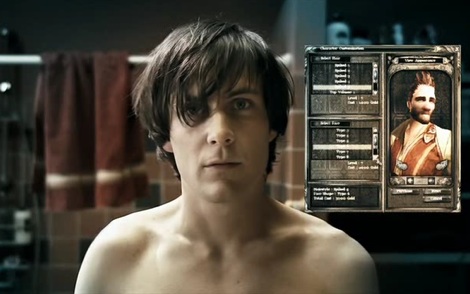 As an alternative to getting bullied at school, an autistic teenager retreats into the world of online role-playing games. As the old saying goes “There’s no time like the present” and the present is only a few scant days left in April and being that April is Autism Awareness Month I feel I should shell out a film that deals with the subject and what better film then one that deals with something that’s been a part of me for 22 years?

The story for Ben X is gripping, emotionally troubling and all too familiar to me. The story follows Ben, a young man with Asperger’s Syndrome who is mercilessly bullied at school. Despite getting help from some of the teachers Ben is still tormented and the only way he can escape from his life of turmoil is by playing an MMORPG where his only friend is a woman named ScarLite. However, the years of torment have taken their toll and ben finds himself on the brink of suicide. The story is incredibly gripping and engaging. It didn’t take long for me to become emotionally invested as the film goes into troubling and unnerving detail of Ben’s life. While he has a happy enough life at him his school life is another story. The scenes of Ben being bullied come off as painfully realistic, as he’s hounded endlessly by his peers, mostly though the characters of Desmet and Bogaert. Because of their realism the scenes can be rather difficult to watch and in one case it can heartbreaking to see the turmoil that Ben has to endure. As the film went on I found myself more and more invested in the story and the character of Ben, so much so that when he attempts to meet his friend ScarLite in real life I found myself at the edge of my seat and practically yelling at my television for him to say just one word. As things worsen for him the film takes a turn and it’s this turn that makes the film very clever. Throughout the film has interview clips with some of the characters, hinting that Ben has committed suicide due to the bullying, which in turn leads to a very humorous, well thought and righteous twist. The character of ScarLite is also a very clever nod as she helps Ben with his plans in the third act, but the film leaves some well-placed clues to show that she isn’t who she appears to be. The film uses it’s cinematography in a rather ingenious way to let us in to Ben’s world. Due to playing his MMO so many times Ben imagines certain real life situations as his game. As he walks to school he imagines himself as his character walking to another part of his massive world and when he’s being bullied by Desmet and Bogaert he imagines him as his character being accosted by two monsters. Whenever this happens it shows the two monsters standing in front of Ben’s character. As the bullying becomes more severe the characters begin to act different. If there’s no fighting then Ben imagines his character defeating the monsters but if the two bullies attack then they attack and defeat Ben’s character in his mind. At one point when Ben tries to defend himself a selection box appears next to him and a weapon is selected which he then draws.

This is one of the many elements of the character that I can relate to, or more so how I used to. When I was young I remember sitting in class and just zoning out, building fantastic worlds and characters around me as whatever my teacher was saying became more and more irrelevant and my world would grow bigger. That’s something that I appreciate with this film: It’s depiction of Asperger’s Syndrome. The film handles Asperger’s appropriately and in a whole comes off as believable. Ben will often retreat into his own fantasy world, he’ll feel afraid of people he doesn’t know and doesn’t understand certain feelings or what people think. That’s what it was for me, except I tended to act more often than going into my mind, not to mention it always seems to take me a long time to truly get to know people and make friends like Ben. Ben is shown as having a fear of the unknown, something I know all too well especially in the short time I have remaining in a part of my life that I’ve known for so long. But it was two things especially with Ben that I saw a reflection of myself: The first is when he was diagnosed with Asperger’s. For him it was one thing and then another and another before finally being diagnosed around the age of twelve. That was what happened to me: First it was ADD then ADHD then when I was twelve I was finally truly diagnosed. The film goes into good detail showing the problems of a late diagnosis. The film will periodically show flashbacks to when Ben was a child and was bullied and seen as a freak by his peers and teachers, all the problems that could have been avoided had he been properly diagnosed sooner. The next is a statement his father makes in an interview clip. Ben’s father says he never wanted to take Ben out of regular school since he was very intelligent and didn’t want to hold him back, something that caused me pause the film and think for a bit. I was taken out of school in the middle of my 5th grade year and was I was sent to a special education school. By 7th grade I was put in a special ed program but in a proper middle school. By my freshman year of high school I was in another special ed program but in my home district and I was allowed to take two outside classes and finally by my sophomore year of high school I was complete mainstream classes again. Where am I now? I’m about to graduate college, having gotten along well here for four years and have constantly gotten good grades. Where am I going with this? By being taken out of regular school for the whole of my middle school year I was able to learn how to control myself, pay attention in class and through and through have become a better student and person. By the end of the film I couldn’t help but wonder if my life would have been like Ben’s if I didn’t get the proper help I needed. And that’s something I truly appreciate this film for: A gripping, emotionally invested story and a good and proper approach to Asperger’s that made me reflect on my own life.

The characters for Ben X are very well written.

Ben is an incredibly likeable and sympathetic character. It didn’t take long for me to latch on to the character due the sympathetic nature, which grows as the torment takes it’s toll on Ben of the character through his endless bullying driving him to suicide, but because I saw him as a relatable character. In the scene when he tries to talk to ScarLite I rooted for him just to say one word, one word that could change everything for him and in that I saw some of that reliability that I have with him. Through this character I see what I have accomplished in my life as well as what I have failed to do and nothing exemplifies the latter as well as his moment with ScarLite.

ScarLite is a likeable character due to what a help she is to Ben. She manages to help him through a very difficult moment in his life as well as helping him come up with a plan to get back at his tormentors.

The characters of Desmet and Bogaert are very detestable creatures. Just like how Ben’s Asperger’s is appropriately written so too is the vicious nature of Desmet and Bogaert. They take any chance they can to make Ben’s life a living Hell and use sneaky, dirty tricks to get out of trouble. In many cases they’re actions caused my blood to come to a boil and every moment they are in is difficult to sit through. Their heartless actions include more modern methods such as cyber bullying that seek to alienate Ben wherever he is and such a thing comes off as horrifyingly real.

Typically I don’t bring up acting in a foreign film, but this case I must applaud the performance of Greg Timmermans. Timmermans does an outstanding performance as Ben, giving a secluded and quiet performance in some scenes and an energetic, destructive and heartbreaking performance in many others. Timmermans portrayal of Asperger’s is well done and does come off as realistic, especially in the case of person who didn’t get the proper help.

Final Thoughts: It’s incredibly difficult to sit through at times but if you can you’ll find a great film in Ben X. The story is engaging and emotionally gripping, the characters are well written easily attachable in the case of the main character, at times it can be clever in it’s editing and storytelling and the portrayal of Asperger’s is realistic and very relatable. If you’re curious to what Asperger’s is or just want to watch a great and moving foreign film then I suggest you log in with Ben X.