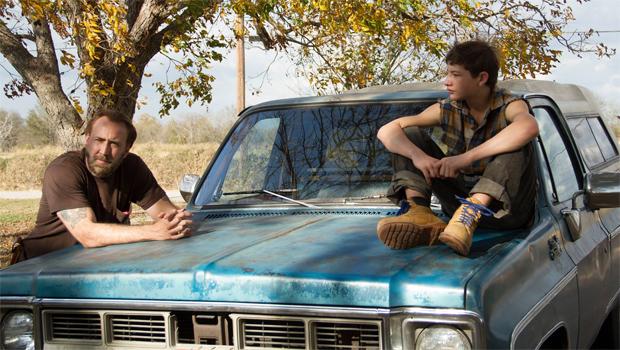 An ex-con, who is the unlikeliest of role models, meets a 15-year-old boy and is faced with the choice of redemption or ruin. It seems, in the past few years, whenever Nicolas Cage makes a movie that isn’t a big budget, unintentionally funny schlockfest it gets swept under the rug only known to an elite few (such as 2009’s Bad Lieutenant). This is the case with today’s film simply titled Joe, a drama that peaked my interests not because it’s lead star as to play it straight (for the most part) but the film’s director David Gordon Green who is known for making vulgar comedies such as the hilarious and touching Pineapple Express and missed opportunity that was Your Highness. The last time a director made the leap from comedy to drama we got Gangster Squad, a style over substance film that relied heavily on humor then drama. Will the same fate befall Joe or has Green managed to break from his usual mold? Let’s find out.

The story for Joe is pretty decent. The story follows Joe, an ex-con who one day comes across a young boy named Gary. It doesn’t take long for Joe and Gary to bond and all seems well until numerous conflicts arise that threaten not only the well-being of Gary but Joe’s otherwise calm life. The best word that I can think of that perfectly sums up Joe is this: surreal. Overall it’s a very simplistic story of an unlikely role model being a strong influence in a young man’s life. The relationship between Joe and Gary is at first rushed but is still developed well over the course of the story and at times can be touching and memorable. I can’t say the same about the conflicts the two face throughout the film. The primary conflict comes from Gary’s drunk, violent father Wade. Wade is constantly abusive to Gary and the film does a good job of showing what a twisted and deranged character he can be, especially in one unsettling moment when he beats a homeless man to death. In fact moments when Joe is dark and disturbing are the ones that truly stand out. At times the film can be very uncomfortable and unnerving and Green manages to pull all of it off with a gritty sense of realism. Of the three major conflicts this is the one that is the best developed since it feels natural and does make sense, save for how Gary is trapped under Wade’s thumb but that comes later. The second conflict involves a man named Willie-Russell. Willie is simply a violent man whom Joe offended off screen and he constantly attempts to get back at Joe. Unlike the conflict with Wade, Willie’s conflict comes off as odd and poorly written. Though a memorable character Willie never seems to pose that strong of a threat in fact the film may have gone a lot smoother had he been given the ax and have the main conflict focus on Wade. The final of the three conflicts takes place through the third act of the film. For some odd reason Joe will occasionally go off the deep end and seemingly attempt to go back to prison. Why does he want to do this? I can’t say for sure, the film never really delves into Joe’s reasoning for messing with the law. But the most surreal thing about Joe is the sheer randomness of so many of it’s scenes. There are scenes that serve no purpose, scenes that don’t really go anywhere and scenes that come so completely out of left field that they’re jarring. One fine example of this is early in the film when Wade tries to teach Gary how to break dance. There’s no purpose, it’s never brought up again and to be perfectly honest I was caught so off guard by it that I couldn’t help but laugh at the absolute absurdity of it. There’s a lot of things one can say about the story for Joe: Simplistic, unsettling, surreal and confusing but two words that won’t get mixed in are boring and forgettable.

The characters for Joe are a slightly stronger suit for the film.

Joe is a likeable character being through his relationship with Gary. Though the relationship is quick to start it’s still nevertheless well done and provides good chemistry between the two characters. However, at times Joe can be a very odd character who will occasionally provide some of those out of left field moments during the film. In one such case Joe wants to frequent a prostitute but cannot due to a dog the brothel has for protection. What does Joe do? He goes home brings back his dog and as he has sex his dog kills the other dog. And there’s one of those dark and unsettling moments I was talking about not too long ago. Despite that Joe can be a likeable character due to his caring nature.

Gary is a very sympathetic and likeable character. He greatly cares for his mother and sister, who also suffer under the tyranny of Wade, which gives him a reason to stay. His hard work and naturally good nature make him a character that is not only easy to grasp on to but in a way comes off as a relatable character. However, my problem with Gary has to do with Wade. Early in the film we see Gary get into a fight with Willie-Russell, a fight he easily wins. Despite this he cannot seem to defeat his elderly and drunk father who constantly beats Gary down. It’s a rather confusing trait to his character, that he can beat a man that’s stronger and more difficult an opponent but cannot seem to land one good hit on his father. This could have made for an interesting psychological aspect to his character but unfortunately nothing of the sort is established and we’re left wondering why Gary can’t simply defeat an old man.

Wade is a character that I love to hate. He’s a despicable, deplorable and downright wicked man with no redeeming qualities to him. Despite my previous statement the film does a good job of establishing Wade as a threat and in some cases the character does have some of the more unsettling scenes in the film.

Willie-Russell, though not a threatening character by a long shot, is still memorable and at times an interesting character. He’s clearly mentally unstable, most likely due to a car accident he survived that he never stops talking about, which explains some of his eccentric and off the wall moments. He’s non-threatening and in all honesty the film would have gotten along all the same without him, if not a little smoother, however I must admit he is an interesting character.

Acting for Joe is astoundingly good.

Nicolas Cage gives a strong performance as the titular character. For a change he’s mostly subdued, giving a calm and believable performance. Cage gets along naturally with the cast and the story itself, fitting in perfectly. However, there are moments when Cage has to be loud and energetic, however instead of hamming it up for laughs Cage’s energetic moments come off as natural and ordinary (or as ordinary as you can get in this film) all the while being engaging and entertaining.

Tye Sheridan gives a good performance as Gary. Like Cage he comes off as believable, having moments where he stutters, repeats himself and holds back during a conversation. Sheridan works very well alongside Cage and the two create a very good dynamic that truly helps the film along in many places and is one of the film’s strongest aspects.

Gary Poulter does an excellent job as Wade. At times he can be very humorous thanks to his more surreal moments but actually does manage to emphasize the threat that Wade is. He does come off as intimidating and frightening in many moments during the film and seems to be having the time of his life as he does so. But there’s an interesting fact about Poulter: Turns out he was a real alcoholic and homeless man who sadly died after production of Joe finished. It’s a shame, his role as Wade was absolutely grand.

Ronnie Gene Blevins does a good job as Willie-Russell. He gives an over the top but nevertheless entertaining and unusual performance as his character and the hamminess of his acting only seems to add to the insane realism of his mentally unstable character.

Lastly I want to talk about the performance of Brian Mays. Mays plays Junior who is one of Joe’s employees. Junior doesn’t serve a vital role in the film and neither does Mays. However, Mays still manages to give a wonderfully hilarious and unforgettable performance as the character, managing to hold me on every line he said and had me in stiches at the end of every scene.

Final Thoughts: The story is simplistic and at times can be surreal but overall Joe is a pretty good drama. The acting is excellent from the cast, the characters are well done and the story is dripping with grit and a thick atmosphere of dread from time to time. David Gordon Green takes the enormous leap from comedy to drama and though he slightly stumbles he still manges to land safely.