The Last & The Curious 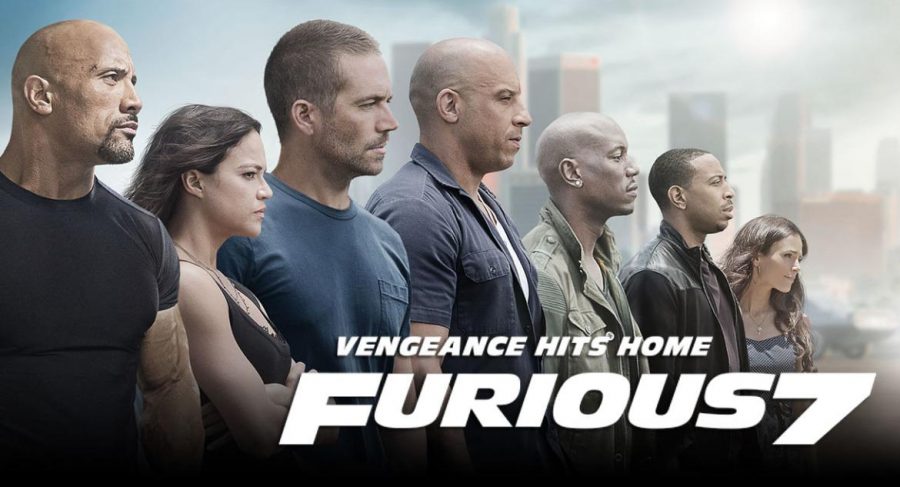 Almost fifteen years ago moviegoers around the world fell in love with a crew of underground street racers who perform high-speed heists. The gang was lead by Dominic Torretto (Vin Diesel) whose stocky build and baldhead would intimidate anyone, especially Brian O’Conner (Paul Walker), who takes the liking of Torretto’s sister, Mia (Jordana Brewster) and also is an ambitious street racer looking for acceptance and friendship. Though O’Conner faces early adversity, he earns the respect of Torretto and his crew through his loyalty and honesty. While this breakthrough movie caught the attention of audiences around the world, like most other series, the sequels would lead to its demise.

On April 3, 2015 the seventh movie of the series was released under the title of Furious 7. The film brought back some of the most cherished characters including Roman (Tyrese Gibson), Tej (Ludacris) and Hobbs (Dwayne “The Rock” Johnson) all of whose acting is less than convincing yet popular amongst audiences. Original cast members also returned including Letty (Michelle Rodriguez) who has seemingly came back from the dead after her death somewhere in the convoluted storyline of seven films.

Hector (Noel Gugliemi) and Twinkie (Bow Wow) made cameo appearances, probably to just inform audiences that they are still alive in real life, they added absolutely nothing to the film.

Furious 7 tells the story of the enraged Deckard Shaw (Jason Statham) who is seeking revenge on the beloved crew after defeating his brother Owen Shaw (Luke Evans) in the sixth movie. The crew is forced to unite with a covert ops team lead by Mr. Nobody (Kurt Russell) to ensure their safety. The crew soon learns that Shaw is not their only enemy as he has teamed up with a group of militants led by the fierce Jakande (Djimon Hounsou) whose team has captured a master hacker by the name of Ramsey (Nathalie Emmanuel). Ramsey has developed a coveted tracking device known as God’s Eye that can pinpoint an exact location of any person within a matter of seconds—not far from modern technology, but a little farfetched. Angered that Torretto and his team have rescued Ramsey at the request of Mr. Nobody, Jakande too seeks revenge on Dom and his team.

Like the other movies in the series, the group is forced to abandon their hometown of L.A to either flee or pursue other tasks. They have been seen in Japan, Mexico, Panama, Brazil, London and now Abu Dhabi—perhaps granting the films international praise.

It is in Abu Dhabi where the crew pursues a flash drive that contains God’s Eye; it is stored in a supercar in a billionaire’s penthouse suite. This lead to one of the most exciting sequences of the film where the car is driven through three skyscrapers—but you already knew that as it was shown in the trailer.

As expected, the film promises intense car chases and exciting action sequences but lacks in meaningful motif that hasn’t already been exhausted within the six prior films.

The film is translucent and overly accessible, it is predictable and is subject to every action movie cliché. It seems to appeal to more teenagers than adults, which makes sense given that most loyal fans began watching the series in their teenage years.

Statham plays his usual and expected English badass and single-handedly heightens each scene that he is on screen. Johnson has given better performances in the wrestling ring and is only on screen for about five minutes.

This film is as exciting as it is predictable and drawn out. The audience is granted their action yet a seventh film in this series may be unwarranted and perhaps has tarnished what was once loved.

Despite the cheesy one-liners and the over-dramatic explosions, the film ended on a touching and chilling note. Not to give too much away, the ending will tear at your heartstrings as the life of main character Paul Walker is commemorated. Walker was killed in a car accident in 2013, leaving his brother to fill in the gaps of scenes that hadn’t been shot.   Crafty dialogue will be sure to raise hairs on the back of your neck—a classy finale that was much needed.