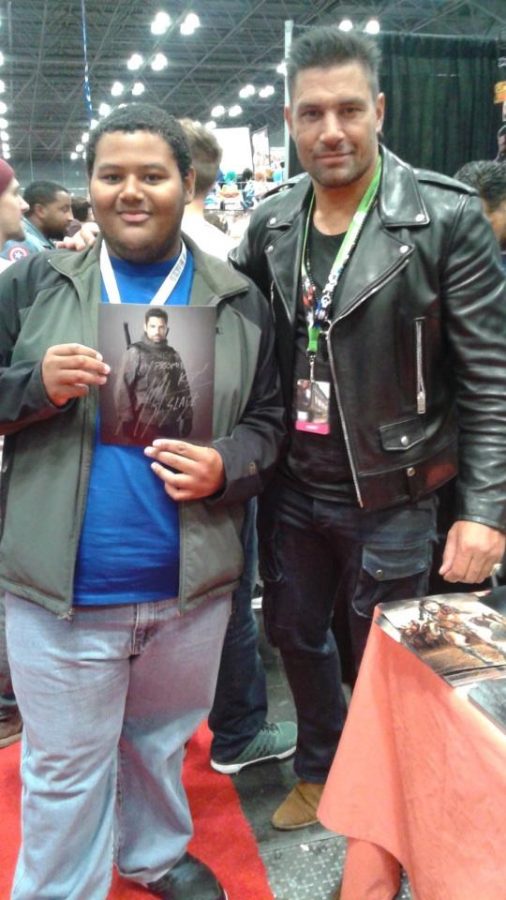 At 3:45 a.m., a group of six people rode out, heading towards the 2015 New York Comic Con. Fueled by three hours of sleep, a can of Red Bull, and anticipation, I returned to Comic Con for the second time.

My friend Nicholas and I bought our tickets in May, and that itself was a battle. We planned it extremely far in advanced, hoping our jobs wouldn’t schedule us for that day, as thousands of people were competing for tickets like some sort of on-line Hunger Games. We had the computers connected to their chargers, wires crossing throughout his sister’s apartment, and the pages loaded to get into the queue line for tickets at exactly 12 p.m. They didn’t put the information to get to the line on their main page, but the link was on their twitter account…which we found out at 12:03.

Three minutes. It took a mere three minutes for four day tickets to sell out. We knew because we got the last of the bunch. It took two hours and forty five minutes to get accepted into the checkout page. We typed as fast as we could on the five or six computers we had the pages loaded on. When we were done with checkout, the smoke had a chance to clear – everyone had their tickets, and we survived our first trial.

Months passed, and Oct. 8 finally arrived. I awoke in the middle of night, preparing for the long line that awaited me. The popular series, Naruto, would be featured in a panel with the creator, Masashi Kishimoto, making an appearance, and Nicholas and I knew we would have competition to get into the panel at 5:45 p.m. that day. The thought of not getting in was inspiration enough to depart at 3:45 a.m., and wait in the line that we knew would wrap around entire buildings if we showed up too late.

The doors opened at 8 a.m. Dodging cosplayers, racing down escalators, and ignoring security as they screamed, “No running!” were all requirements to be two of the first ten people in the line. I extended my retractable chair, and spent two hours waiting for them to hand out the wristbands to the panel. The staff finally handed them out, and we were free to roam the Con, or not. We looked around for maybe two hours, but we returned to where they handed out the wristbands because this would be the location for the next line to get into the panel itself. Nearly six hours early, I extended my chair again.

The room was loud, but the kind of loud that was like a wall of indiscernible noise. With no clear objective other than waiting in sight, I got to take a nap. The wait was long, but when it was finally time to be accepted in, we were guided into the panel, very slowly. Security told us that because we were head of the line, we controlled the speed of the mob of the approximate 2,000 people behind us. If we tried to run, they would try to run. This would evoke pushing, tackling and trampling. But once we entered the room, there were no rules.

We ran directly to the closest seats that weren’t reserved for VIP holders. Some chick dressed in pink and blue robes tried to push past me, so I shoulder checked her before I realized she was a woman. Our work had payed off, because we got fifth row seats towards the center of the room.

The panel began, and turned out great. Naruto is a Japanese comic, or “manga,” so the creator had a translator to answer questions from the proctor and the fans. After everyone had their questions answered, Kishimoto did live drawings of two of the most popular characters at the crowd’s request. Before we knew it, the panel was over. We went back to the display floor, seeing people in their crazy Star Wars and Marvel outfits, but mostly looking for a limited edition copy of the final Naruto volume. They sold out, so we went home.

The next day, I had a mission. Naruto never had a panel at NYCC before, so there was no anticipation to build there. However, I also watch Teen Wolf, and they had a panel two years prior. When I went last year, I expected them to have a panel, they didn’t. This time, a panel was announced, but not the cast members who would be attending. There had never been more than three cast members who would attend because NYCC is on the other side of the country from where most of them live and work. No matter how many members of the cast were going to be there, I knew I had to go.

When they opened the doors, we went back into the dark room we were forced into the day before. Once we were released at 10 a.m., I immediately went to the room that the Teen Wolf cast would be in later. I sat through every panel, slowly moving up to get a better seat. In the end, I only got fifth row again, but it was worth it.

The cast came out, and there were originally four people, until a fifth came out revealing his return to the show, because the actor had not been featured at all in the season before. They answered questions about character development, plot events of the upcoming season without revealing spoilers, and showed a trailer for the next season. It was better than I could have expected, because I actually didn’t like two of the characters whose actors arrived at the panel, and even then, there were more people than ever at this panel.

At the end, they mentioned there would also be an autograph signing the next day. I like the show more than anything outside of the content, so I had nothing to get signed, because I didn’t have unnecessary memorabilia. I knew I would have to draw something for the signing in case they didn’t have anything provided. I would have had six hours of sleep, but instead, I got three, because the drawing I did of the main character took half of the time I had.

We then left for the second day, and with the announcement of the signing, I knew that the third day would also be vital. I was at the head of the line, and all was well. Except for all of the waiting that there would be after that. I began the line at exactly 10:00am, but the signing wasn’t until 1:30.

So I sat there. Eventually, the doors opened, and they allowed ten people in at a time. They lined us up on the wall like we were about to get arrested, and they said that no one was allowed to get anything signed that we brought in. They supplied us with promotional posters for the second half of season five. However, not every cast member showed up. The surprise guest didn’t show up, and neither did the main character. I wasted my efforts for the span of three hours. The creator of the show’s pen didn’t leave the poster before the security team was saying, “have a nice day.”

What a great signing.

The creator, and the two actors of the characters I didn’t like were the people to show up, but the brief interaction I did have was actually great, because it made me like them. I didn’t like the two actors because no matter the question, one couldn’t seem to configure a sentence, and the other couldn’t stop bringing the subject matter back to himself. It had proven true the day before, and in every interview I had ever seen them participate in. This time, they just signed the poster, criticized each other’s handwriting, and I was on my way. Good times.

I went back upstairs to get my copy of the final Naruto volume that had sold out the first two days. The line was annoying. But I actually secured my copy with an alternate cover art. We left after this, another long day completed.

On the final day, I had to get ready in ten minutes, because my friend and his family were already outside of my apartment waiting for me when my alarm went off. This was another night getting only three hours of sleep. I make it a point never to be late, and of all days, the final one is when I have a slow start.

This time around, we actually left when the sun was coming up. We arrived around 8 a.m. again, the final day marking our last day of freedom before all of us returned to school, work, or both. I headed over to the booth where Manu Bennet from Arrow, Spartacus and The Hobbit would be for an autograph. He would be showing up a little after 11 a.m., and I got my picture and autograph. This guy was bigger than I thought. I’m usually at least wider than people I meet, but that was barely true, and I guess I always assume celebrities will be shorter than they appear. I heard that he got into an altercation a month before NYCC. I would regret to be the one that made him angry, because the guy probably died after.

We then went to a panel I didn’t care about, because the last thing that mattered was the autograph signing. NYCC closes at 5 p.m. on Sundays each year, so we departed the Con being rushed out by security.

At 5 p.m., a group of six people ride home from the 2015 New York Comic Con. Fueled by three hours of sleep, half a can of Red Bull, and anticipation of the events that will take place next October, I awaited my subsequent visit to Comic Con 2016.