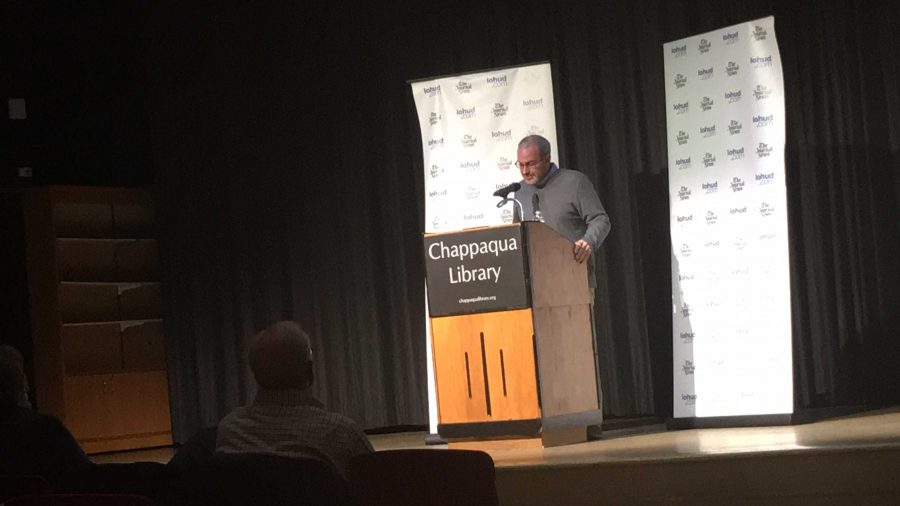 A quiet little room in the Chappaqua Library in New York is filled with people chit-chatting and catching up with each other over tea, coffee, and homemade cookies. They await the guest of honor – Hollywood screenwriter, Mark Bomback.

The hour long panel started with Bomback speaking about the brief history of the craft of screenwriting, and then the panel continued with a short question and answer panel.

He went on to talk about the early screenwriters and the amazing work those writers have done and how far the industry has come, especially with all the CGI work that editors are able to do for movies. He used Dawn of The Planet of the Apes as an example. They didn’t have a location yet and the editor had said he added an unfinished skyscraper to the end scene.

Bomback proceeded to speak about how in the year 1927  the first sound film was created and asked the audience if they knew the first line of dialogue ever spoken in a movie. People were silent and waited for the answer. Bomback then said,

“You ain’t heard nothing yet. That’s right!”

Bomback paused and said,”Don’t worry, I’m getting to the present time soon. Just bear with me.”

He finished up his brief history lesson to talk about when he moved out to Los Angeles, California and his experience, as well as what he had learned through his experiences and how he learned what to do and what not to do.

He then went on to talk about what a screenplay actually is and how he would describe it.

He compared the art of screenwriting to the art of architecture. Without the screenplay there is no idea of what the movie should look like or even be. Without blueprints there would be no way for anyone to know how to build a house.

“You need to grab people with big ideas, big headlines, and everything is external, external, and keep it moving,” said Bomback.

With that he transitioned into how to adapt novels into screenplays. It may seem easier since one has all the details from the book, but it turns out it is actually more difficult to write. When adapting a book into a screenplay there are many things that can go wrong. For example the author of the book may see certain things a different way and may expect it in the movie, but the screenwriter may not like that specific part. The screenwriter in a sense has a silent partner, but the silent partner can’t really do anything with what he wants in the movie.

“The screenwriter’s job is to make the interior things exterior,” said Bomback

He used as an example of this when he first started working on his scripts he started to write what the character was thinking, and if  no one can see it or hear it, it doesn’t work. As a force of habit when writing a script, it would start telling the writer what a character was thinking but the audience wouldn’t be able to know what a character that is. Rule of thumb is, if you don’t see and don’t hear it, it cannot be on the page.

He talked about how he started script doctoring about seven or eight years ago. Script doctoring is a when a screenwriter is hired by the movie production to help polish a script up as well as help out with some of the specific elements of the script to make some of the aspects come out better.

With War of the Planet of the Apes, Reeves and Bomback kept had a deadline of writing it so it would be able to premiere this summer of 2016, but it was pushed back and didn’t happen. Now the movie is done with filming and is currently in the editing process.

He wrapped up his panel by talking about how he decided to live in Chappaqua, New York instead of Los Angeles, California, and why everyone in this business should go venture out to California at least once.

Los Angeles is where the action is, he says, and that writers have to go out there to give themselves a fighting chance.

“In order to survive in this business, you have to go out and do something about it. No doubt about it.”