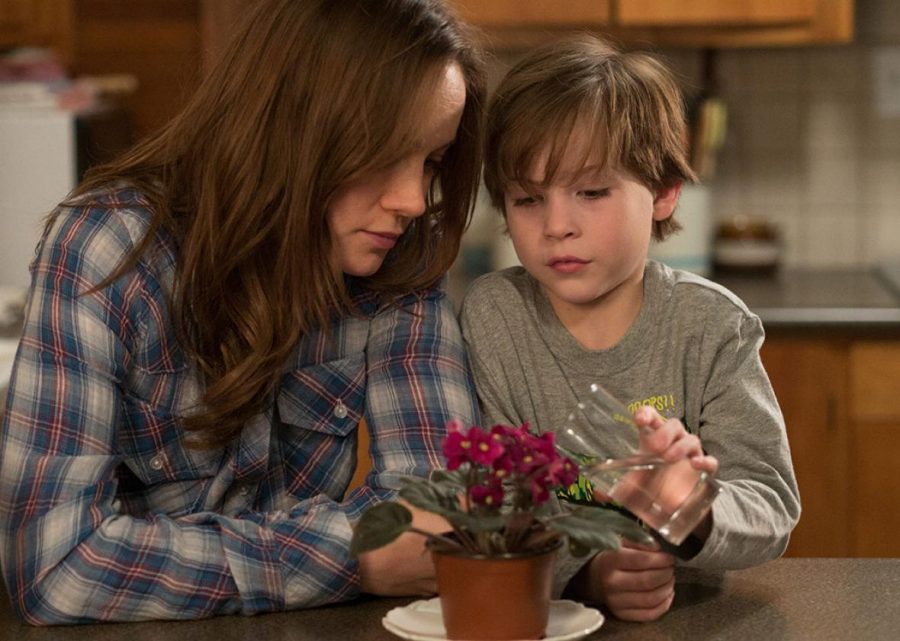 “Room” is a heart-wrenching, but profoundly enriching story about creating your own reality in the face of insurmountable adversity. Directed with aplomb by Lenny Abrahamson, this tiny film blesses us with transcendent performances by all principle actors, but especially Brie Larson and Jacob Tremblay.

Based off of the best selling novel of the same name by Emma Donoghue, “Room” follows Joy “Ma” Newsome and her son Jack as they live in a 10×10 shed under the oppression of Old Nick. Each Sunday, Old Nick (Sean Bridgers) visits the shed to drop off limited food and supplies for our protagonists to survive and forces himself on Joy as Jack listens from behind the wardrobe panels. Donoghue, thankfully, adapts this story and faces the tremendous task of translating her vivid, slow paced work from page to screen. While she and Abrahamson are mostly successful, some of the monotony and incremental time passage from the book are missing from the film adaptation in order to keep it just under two hours. Abrahamson, however, superbly allows us to discover tidbits of information slowly as the story unfolds. He also makes sure never to let the overwhelmingly melancholic situation deter that “Room” is still, at its roots, about a mother and her son. Early in the film, Abrahamson establishes the easy rapport between the two leads and lets their authentic chemistry speak for itself. He keeps the camera tight on their faces and shoots the Room scenes with a dreary grey filter, but also makes the Room feel bigger than the 10×10 shed they’re living in.

The audience learns that Joy, or as her son calls her “Ma”, was kidnapped as a 17 year old and has been in captivity for seven years. The film opens on Jack’s fifth birthday and we understand the circumstances under which the child was born. Speaking of this child, Jack is the prism through which we see the universe of “Room.” His voiceover narration and dream-like sequences flesh out the only universe he’s ever known – Room. Jack wakes up each morning and greets a plethora of personified objects: Table, Toilet, Chair #1, Bed, and the magical TV. Stephen Rennick delicately scores these sequences to emphasize Jack’s curiosity, but also remind us how futile his dreams are when he’s trapped inside of Room. This curiosity is what makes Tremblay’s performance so essential and remarkable. He as the uncanny ability to make Jack seem soulful and wise, but always through the perspective of innocence and youth. Cinematographer Danny Cohen pays close attention to Jack’s tousled, unkempt hair in the wide screen. That hair, as Jack calls it, is his “Samson hair” – which gives him strength.

In one of the more suspenseful scenes in the film, Joy learns that Old Nick has lost his job. Abrahamson has us with Jack in a wardrobe behind the closed door watching and listening as the events unfold, and soon after the plot propels itself forward. Joy has attempted escape before, but it has lead to dire consequences. She hatches another escape plan, but this time she has the support of Jack, or so she thinks. Because they’d be leaving Room, Joy starts to explain to Jack more about the outside world, and in even simpler terms what the words “outside” and “world” even mean. It’s this scene that shows how truly dynamic and exceptional Larson’s performance is. She manages to be frustrated with Jack’s insistence on disagreeing with her, desperate because she’s been trapped for seven years, while also remaining radiant and maternal. She explains the world to a five year old, or more specifically, she explains the world someone who’s only ever known the four walls around him. Abrahamson tightens the focus on his actors and illuminates the schism between Joy and Jack: Jack doesn’t want to leave the life that he’s comfortable in, and Joy has to be the hated mother who’s not giving him what he wants, while also doing what is so clearly best for him.

The climax at the film’s midpoint is the most anxiety-inducing and emotionally potent sequence of a film this size, and it propels us into a more subtle and open second act. Joy truly comes alive and Abrahamson explore more of her depression, or “gone” days as Jack calls them, and her guilt. Jack and his Samson hair serve as the strength for the both of them, and reminds us that the love between a mother and son, no matter the circumstances, is unimpeachable. In a film where there are no explosions, moving set pieces or extravagant costuming, direction, writing, and performances are key. “Room” more than delivers on all three.