‘Grace and Frankie’ Season 2 Is Golden 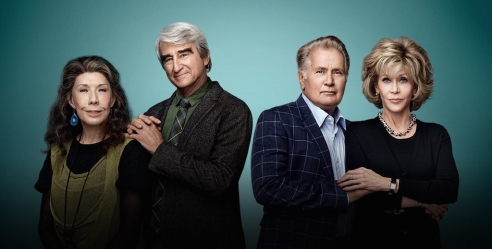 Like a newly developed neighborhood that makes all the surrounding ones look rundown and in long for the better times of yesteryear, Netflix is quickly becoming the exclusive residence of choice for today’s smart and edgy programming. This isn’t necessarily a bad thing, however, for those who humbly remain on the outside. But like their classic nosy neighbors of shows gone by, network and cable should be paying attention.

Set with a beach view, cozy slippers and a refrigerated jar of peyote, Grace and  Frankie are a modern-day odd couple making themselves right at home as two of Netflix’s elite residents. Combining endless  charm and wit that originate from the most interesting of circumstances, and carrying a most quintessential mood, this comedy-drama takes viewers on a quest through the lives of two seventy somethings. Not your average trip through the golden years, these two women surprisingly, or more so unwillingly, find themselves at the beginning of a newly unearthed chapter in their lives: divorce. A residual of the 20 year affair their husbands have been having with each other.

The series, created by Marta Kaufman and Howard J. Morris, stars film and television royalty, Jane Fonda as straight laced Grace, and Lily Tomlin as hippie, Frankie, distorted reincarnations of Felix Unger and Oscar Madison respectively. A vulgar, delightful, and sometimes delectable, rare look into the lifestyles of women who are all too often written off when looks are supposed to fade and women are thought to be at their most undesirable, Grace and Frankie  is original in its premise, and refreshingly brazen enough to take every chance it gets to throw this in the viewer’s face. Heads up, cable. Missed again.

With the introduction of its entire second season on May 6th., the series picks up with the title characters still in the process of piecing their lives together. The season one finale left off with a guilty Sol (Sam Waterston), Frankie’s ex-husband, coming home presumably to confess a secret to an unsuspecting Robert (Martin Sheen), Grace’s ex. Season two continues from that point taking viewers through a few betrayals, deaths, and twists and turns along the way, providing just the right amount of the plot for the main characters mixed with the subplot of the supporting cast. Though scenes sometimes move too quickly, season two is still almost as seamless as season one. There  is always enough room for everyone’s story to be told, and this is successfully accomplished without any betrayal to the main storyline.

Passing through each 32 minute crisply shot episode is an endless amount of chicly dressed family members,  friends and even coworkers. Behind the beach house doors, or in the home of Robert and Sol, viewers are treated once again to exquisite sets furnished with precise detail. Succinct but glamorous, they perfectly mimic the eloquence and clever conversation between the characters that keeps this series interesting. Viewers won’t need Frankie to figure out that an  Ambien isn’t required, one will be happy to stay awake and binge watch the entire season.

Pertinent  to any series in which all episodes are handed to viewers at once to watch at their leisure, the cast of the series is a brilliant ensemble  effortlessly cohesive in providing  the timing necessary to keep viewers engrossed. Along with smart writing, the  cast is also what sets it apart from regular television programming found on network and cable stations. Yes, there are a few well cast shows and competent scripts on other providers, but series of this kind rely on originality and execution and sometimes what is good for the masses isn’t always what is most intelligent. Fonda is glamorous in her portrayal of Grace whose neuroses rears its head only to be matched by Tomlin’s Frankie who, in the predicament the two women share, finds solace in herbs and spirituality. Together the two complete each others lives, filling in the pieces that were missing in the relationships with their husbands.

Martin Sheen as Robert is endearing and Sam Waterston as the sometimes pitiful Sol embodies the character so fully it is hard to imagine him any other way. The two not only compliment their former spouses, but each other in a romance that does not start off pleasantly with their revelation to their wives, but eventually blossoms for viewers in a way that spans from the comedic to a genuine love story.

In the second season, the complicated love lives of those over seventy in Grace and Frankie continues to be unapologetically sexy and blatantly honest. The series is not a stereotypical look at older people who are stuck in their ways, but allows them to be relevant without being foolish . The series  takes an initiative  to chronicle the lives of women, and also men, at an age where most perceive life is at a standstill. Grace and Frankie share experiences that are relatable to all viewers, especially those  who have never been represented on television before, showing the many doors that never would have opened  had this not have happened to their characters and then shared with the world. Netflix has taken their perspective a giant step forward from the last time viewers were given a creative look into the lives of older women in NBC’s The Golden Girls (1985-1992). Like the innovative institution of the establishment  itself, Netflix programming offers relevance. Thankfully, it  is unafraid  to reflect the changing times.

According to Grace and Frankie, being of an older generation doesn’t mean you have to be stuck in your ways. If you don’t take time to change, your viewers may never know what they’re missing.