Students Open Up Their Hearts and Talents At Open Mic Night 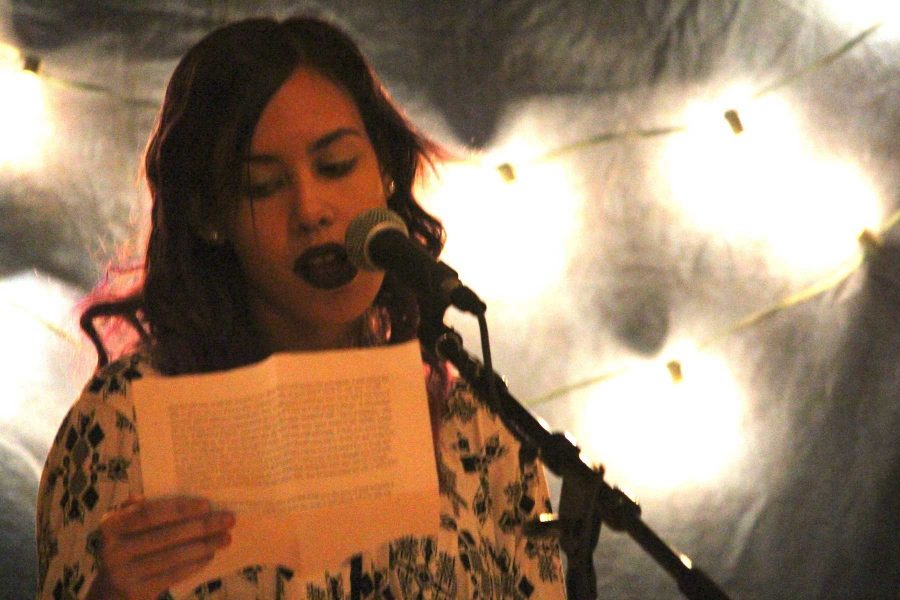 “Up next is Jelissa Hodges.”

She stood up, nervous, and walked onto the stage. She apologized, then tucked her sweater under her arms and started to read a poem she had written. Her hands shake and voice cracks as she begins to read.

“My father who is forever gone.”

The room filled with silence as Hodges begins to speak, “Do you remember me? Do you know who I am? If you don’t then I am your daughter, Jelissa. Don’t tell me to leave. Don’t tell me to go because I won’t. And if you try to leave and I stay behind, I won’t let you because I need to know why did you leave me when I needed you?”

The room was steady with silence.

Mercy College’s Open Mic Night started off with a few students filling the Lecture Hall. Small refreshments were served. The dimly lit hall gave the room an intimate feel – the mood was just right. The stage was dimly lit.

Students read poems of their own along with some written by famous poets. Then there were some who went up and sang. Open Mic Night was nothing but full of surprises. It was full of people who had passion and enthusiasm for the arts.

There was a recurring theme during the evening: the father/daughter relationship.

The night started off with a few names being called, but one name stood out in particular.

Jelissa Hodges is a sophomore who is studying criminal justice at Mercy College. Though not a journalism or English major, or a said “writer,” this was the perfect opportunity to let out the deep feelings she had trapped inside of her.

“It was a form of closure for me, and this was something that was truly bothering me, so I just wrote it out,” said Hodges.

When asked about what her inspiration was when she wrote this poem, she took a breath, and simply said, “My father.”

Hodges’ father was a photographer for the U.S. Army and was discharged when he was shot. When he came back, he suffered from Post Traumatic Stress Disorder (PTSD).  Her mother would always tell her stories of how her father was different, and Hodges would feel the guilt of thinking maybe she was the cause of their divorce.

As she continues to read, her hands still shake while holding the paper.

“Having the baby feel, when she grows up, that it was her fault that her parents got a divorce? Feeling as if she weren’t wanted, that maybe you couldn’t handle being a father to a newborn again, so you decided to waste your life and make yourself sick so that you wouldn’t have to deal with your small fragile innocent blood anymore.”

In writing the poem, she channelled feelings she had throughout her youth. Hodges would always think to herself, “Does he not love me?” The question of whether she was the cause of her father leaving constantly played in her mind.

She mentioned waiting at McDonald’s while reading. That place may not mean much to anyone else, but to Hodges, that was one of the places that her father would meet her and her sister. Those were the moments she got to spend quality time with her father. They were the only moments she had.

“I get that you couldn’t see me anymore because you stopped showing up at the police department when you were supposed to pick me up, so that we could spend the day together going to the movie theaters and eating food afterwards. But you ruined that. Threatening to kidnap me and my twelve-year-old sister. Threatening to take us away from our mom whom we needed and take us overseas – so that she wouldn’t find us but not realizing that we would get rescued and go back to her.”

Being told her father wanted to kidnap her and her sister was only the beginning of what was causing Hodges’ pain deep inside. She has been living with guilt ever since she was a young child. Once she had figured out what she wanted to do as a career, she realized that she also needed to let go of some of those painful feelings and memories.

Hodges went to her PACT mentor, and they suggested that she write out her emotions. With this poem, she feels that all of her feelings and guilt are cleared.

As she read, her voice cracked but she continued.

“Looking for closure, and now I can’t have that thanks to you because you’re gone. Long gone. Forever gone. And I have to live with that for the rest of my life because you died and I will never see you again. I will never be able to get to see you face to face looking for the closure that I need, to ask you, to tell you how much pain you caused me, how much tears I cried for you, how sad I am, how I am in college and I’m working hard as much as I can so I can have a future. A successful future. A bright future. And not end up like your deadbeat self.”

Though her father is gone, she wishes she could have some kind of closure with him.

Since she is a criminal justice major, she hopes to find even more closure with her father who is no longer with us. She hopes to find out more information about her father, but also help out those who have gone through similar situations.

Even though she went through some tough situations in her life, it has made her the person she is today. Writing out her feelings has given her enough closure for her to move on and not blame herself anymore.

“I still love him,” Hodges said. “It’s a forgive and forget kind of thing, you know.”

She hopes that she can go into the world and help those who have been in similar situations she has, but also prove to herself that she can become anything she wants to be in life. What ever doesn’t kill you makes you stronger, and that is what she plans on doing.

As she comes to the end of her poem, she takes a deep breath. Her hands are still shaking as her voice cracks. She fights through to finish.

She embraces the last line in her poem with a slight smile as she reads, “No matter how much you hurt me, you’re still blood. You’re still my father, and I am still your daughter.”