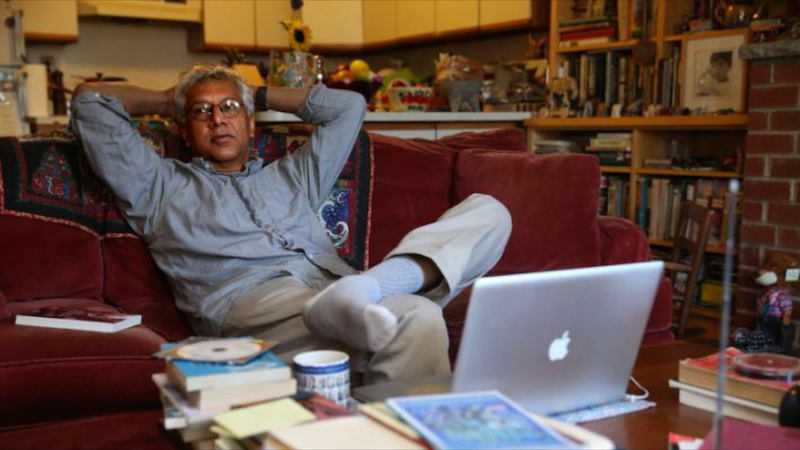 Whether centered on the daunting, as is the storyline of “The Nursing Home,”  or the threatening calm of a self-imposed vow in “Road Trip,” the poems of Vijay Seshadri are a journey in eloquence. They sustain a lingering supreme serenity amidst the unrelenting subject matter of the everyday. One could say he views the often inescapable onset of life’s latter reel as the beginning of the distance away from memory and function.

Mercy College students were recently given the opportunity to witness firsthand the resonance of Vijay Seshadri’s words and acute rendering of the human experience. On February 8th Seshadri, who won the Pulitzer Prize for Poetry in 2014 for his collection of poems entitled 3 Sections, spent the unseasonably warm winter evening hosting an intimate reading of his work in the Dobbs Ferry Campus Victory Cafe. Presented with  insight and anecdotes, Seshadri’s presence and voice brought poems from the collection, along with a few others, to life for a captivated audience.

A former editor for The New Yorker and currently a professor of Non-fiction writing at Sarah Lawrence College, Seshadri was born in Bangalore, India, and immigrated to the United States at the age of five. He grew up in Columbus,Ohio, graduating from Oberlin College and later Columbia University. In 2001 his poem “The Disappearances” published in The New Yorker following the Sept. 11 attacks  struck a heartfelt chord with the American consciousness.

A small child, Seshadri’s move to the United States would have a profound effect on his poetry,  evidenced in the first poem of the evening, “Trailing Clouds of Glory.” The poem addresses the topic of immigration to which Seshadri shared insight on feelings of “isolation” stemming from residing in the unfamiliar and the effect of having to relocate “from one civilization to another.” Toward the close of “Trailing Clouds of Glory” the speaker in the poem leaves the reader with an unforgettable observation of the reaction of a young immigrant boy of three to a conversation between his mother and sister. The speaker states, “He had a voice like Richard Burton’s” before closing with a brief recitation of lines from King Lear.

Seshadri joked  about the poem’s final lines, as he realized that the reference to Richard Burton has went over the heads of his young audience.

Seshadri continued the evening with several readings including “Collins Ferry Road” a poem dedicated to his father, and “Road Trip” a sympathetic look at one’s desire to leave it all behind and escape. Seshadri’s reading of “Road Trip,” a poem originating from a “deep American instinct,” emphasized the profundity of the poem’s meaning. What was beautifully demonstrated through hearing the author’s voice was the speaker’s ability to gently grip the arm of the reader, taking them as an unknowing, or perhaps willing, co-conspirator, coaxed away from the grievances of time. Suspended momentarily in the beauty of lines such as “I won’t dim with words the radiance of my gesture,” they are brought back to consciousness, all before being whisked away again indefinitely.

Seshadri also told stories about his life and journey as a writer. One of the last anecdotes of the evening would humorously reflect one of the mechanics of life that many may come across. Seshadri’s “Commas, Dashes, Ellipses, Full Stops, Question Marks” originated from the surprising number of years that the poet was called but not selected to serve on a jury. A point which he understandably admitted he began to take personally, as more than 30 years had gone by, sharing with the audience to much laughter, that he once believed the problem was himself.

The final poem of the evening was “Light Verse,” a poem constructed when Seshadri was asked by The New York Times to find inspiration in the rather arbitrary topic of Daylight Savings Time.

Following “Light Verse,” a question and answer session with the audience took place. Students were able to get to know Seshadri further, receiving advice on their own writing as he answered several questions, including ones on his writing process, writer’s block, and revision.

The evening concluded with light refreshments as Seshadri personally and graciously spoke with individual audience members and signed copies of 3 Sections.

For those in attendance, the atmosphere reflected the calm in Seshadri’s poetry. Whether familiar or unfamiliar with his work, attendees were gifted with a glimpse of his journey and experiences.

When asked specifically about his gift of interpreting the human experience in poetry, Seshadri paused before saying he was not sure that he would describe his ability that way, but knew early on he was “good with language.”

Given the dynamic subject matter, perhaps what ultimately shines through most in Vijay Seshadri’s poetry  is his astute recognition of what affects people a a whole.

It was only fitting that he subsequently reasoned, “I looked for the beauty in things.”