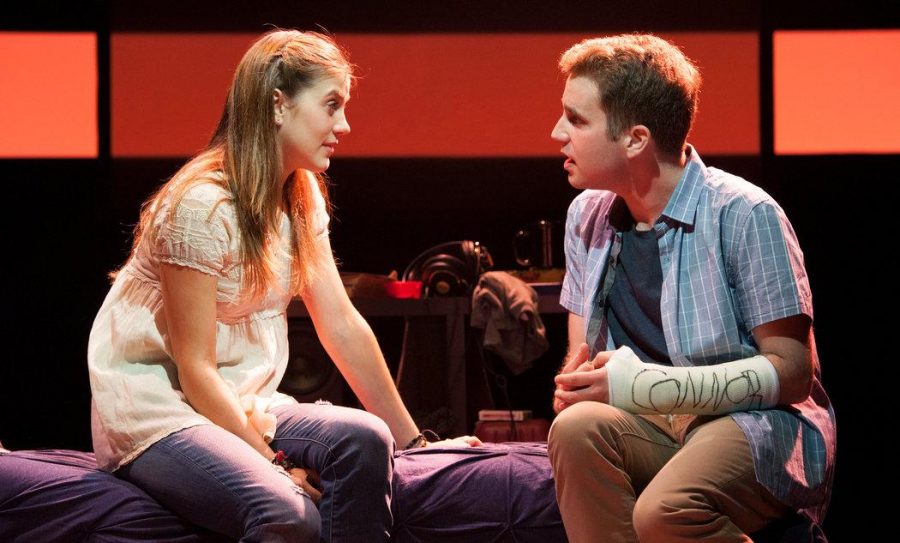 Evan Hansen is kid who has Social Anxiety Disorder. And the walls are crashing down.

Evan, played by Ben Platt, is not a popular kid – in fact, he’s an outcast. His psychiatrist suggests that Evan should start writing daily letters to himself. Hence, Dear Evan Hansen.

Today is going to be an amazing day, and here’s why. Because today all you have to do is be yourself. But also confident. That’s important. And interesting. Easy to talk to. Approachable. But mostly be yourself. That’s the big, that’s No. 1. . . . Also, though, don’t worry about whether your hands are going to get sweaty for no reason and you can’t make it stop no matter what you do, because they’re not going to get sweaty, so I don’t even know why you’re bringing it up, because it’s not going to happen.

On his first day of school, Evan carries a permanent marker around to get people to sign his cast which is suggested to him by his mother, Heidi. Heidi, is usually never at home. She if she’s not working, she is attending her night classes but overall, she tries her best when trying to raise Evan. Being an outcast, Evan has a hard time going up to people and asking them to sign his cast. He goes up to his crush, Zoey Murphy, and acts socially awkward in front of her to the point where she walks away from him. The only person who is a “friend” with Evan in school is Jared Kleinman, Evan’s cousin. Jared sees the cast on Evan’s arm and asks him where he got it from. Evan tells him from falling out of a tree from his summer job and continues to tell everyone the same story.

Connor Murphy, Zoey’s brother and another outcast, bumped into Evan and he asks Evan about his cast and Evan gives him the same response that gave Jared, “I fell out of the tree.” Connor then writes his name in big letters on Evan’s cast. In the school library, Evan writes another Dear Evan Hansen letter to himself where he does mention that he likes Zoey. However, instead of Evan picking up his letter at the printer, Connor picks it up and starts to make fun him because Evan mentions Zoey’s name. Connor keeps the letter instead of giving it back to Evan. This is only person to person interaction between Evan and Connor that the audience sees.

A few days has passed, Evan is still freaking out that Connor has his letter. Evan was called into the principal’s office where he sees Connor’s parents, Cynthia and Larry. His parents find the Dear Evan Hansen letter in Connor’s pocket. Connor’s parents then told Evan that Connor committed suicide.

The Murphy’s were assuming that Connor and Evan were friends because of the letter they found. Evan then consults in his cousin who advises him to go and tell the family the truth which is, that him and Connor were not friends. Instead, Evan comforts Conor’s family by telling “small lie.” That lie being that Connor and Evan were great friends. Evan then tells the family that Connor and himself were communicating via e-mail. Evan suggests to bring the letters over another day so he can to bring some closure for the family. The Murphy’s then start to question why Connor ever brought Evan over to their home. Evan mentions an orchard. He tells the Murphy’s that he broke his arm while they spent the entire day at the abandoned apple orchard.

Throughout the play, Evan continues to comfort the Murphys with his fabricated lies. Evan begins to become closer to the girl that he wanted, Zoey.

As time goes by, the school starts to forget about Connor Murphy. Evan wanted to make a difference. Evan along with Alana, a girl who is always looking for extracurricular activities to do and also an outcast, along with the help of Jared start, “The Connor Project.” The Connor Project is to keep his memory alive and others like him. The play takes a turn because now Evan is popular, people know his name, unlike before. The three of them, pitch the idea to the Murphy’s who liked the idea. At the school launch of The Connor Project, Evan gives a speech which he starts to panic a bit because he told Connor’s family this fabricated story about Connor and was not sure of what to say at the launch. Evan starts telling the same story to the audience that attended the launch which then goes viral. People on social media like Facebook and Twitter were giving The Connor Project attention.

Social media plays a big key in this play because without it, people would have never known about The Connor Project and what it stands for. Evan and Alana pitched a fundraising idea on The Connor Project’s official website which is to raise $50,000 within three weeks to reopen the abandoned apple orchard. Evan becomes closer to Connor’s family and less closer to his own mother, Heidi. Evan himself, finds comfort being around Connor’s father. Evan eventually tells him that his father left when he was young so he does not have a father figure currently in his life. He eventually mentions to Zoey that he has no money to attend college that is why there are a lot of scholarship applications in his room.

Hence begins a series of events that begins to reveal Evan’s accidental deceit, and how he must atone for his season.

Ben Platt’s performance as Evan Hansen shows that even though the person may not be popular, they should be noticed before not after they pass away.