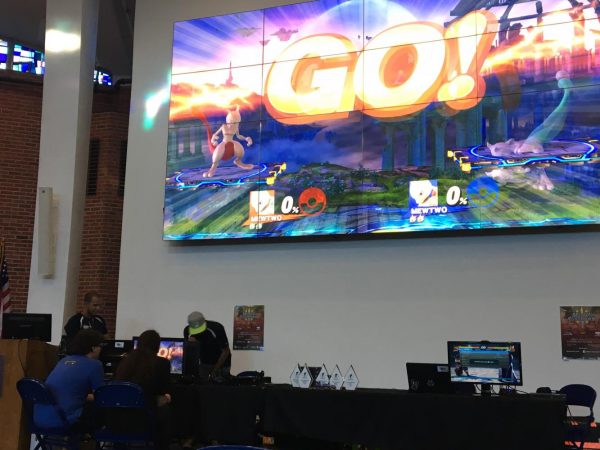 The Rotunda bursts with sounds from every conceivable angle. Nearly empty pizza boxes are discarded throughout the room. TV monitors are placed on each of the half dozen tables that line the perimeter of the large, brick-walled room. In the center of the Rotunda stands twelve large TV screens merged as one. The uplifting background music loops every five minutes to signal the next game.

There is a familiar feeling in the room that any sports fan can identify; but this is not a football game, nor baseball or hockey. This is the gaming tournament known as Mercy Rushdown 3.

Super Smash Bros 4  is today’s game of choice for the tournament. 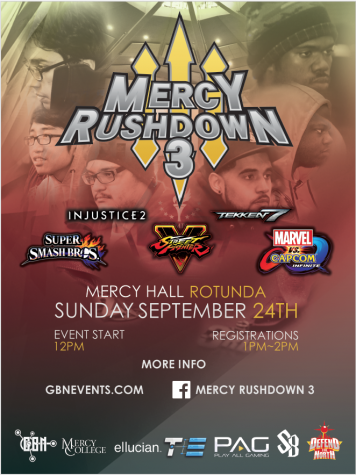 Cespedes started the club roughly three years ago on the Dobbs Ferry campus. A previous video game club existed on the Bronx campus, but as he recalls, “we didn’t hear much back from them. Nothing panned out.”

Joe Giron, who became the Video Game Club President last year, is proud of how the club has steadily grown into the devoted group of members it now includes. What started as a group of four friends tripled to twelve members. “The main focus wasn’t video games. I wanted it to be a place [for people] who like similar interests to come together and make friends. It worked out pretty well,” says Giron.

Giron believes they have achieved this goal. He mentions that many Video Game Club members talk during and outside of club hours. Even more, he and Cespedes, who serves as Chief Executive Officer, are colleagues at Gaming Battle Network. Cespedes describes its mission as hoping to “improve and grow local gaming communities around New York City.”

This is a mission he is still very much committed to even since graduating from Mercy College. “I’m still very hands on as an alumni. I come out whenever I can.”

Cespedes approached Felipe Henao, Director of Student Life, Health & Wellness, in the Fall 2016 semester about Mercy College hosting a tournament. “Every time we can help Mercy host an event, they aren’t going to tell me no, because they know how active I was here,” says Cespedes.

Cespedes is happy to lend Gaming Bounds Network resources to Mercy Rushdown. “We often lend our equipment to the college, because we’re Mercy alumni. We want to get the gaming scene to grow here.”

Mercy Rushdown is seeing great progress in its goal to grow its community of gamers. Giron touts how the past Mercy Rushdown led to a complete tournament bracket of 64 floor players last year. “Often we get outside players for the Mercy tournaments who come through and play,” says Giron.

Fred Distance, a college student from New Jersey, and Nicole, his girlfriend, were two of those players who made the trip to play in the tournament.

The newly dating couple met several years ago in “The Loft,” a video game room at their high school. They describe themselves as, “two sides of a coin” when it comes to gaming. He, the burgeoning competitor, and she, the player who’s in it for the fun of playing.

“If he thinks they are within driving distance and he thinks they’re worth going, we’re there,” Nicole says as she plays Super Smash Bros 4.

Nicole is a recent graduate from New Jersey Institute of Technology and holds a degree in Construction Engineering. Her fingers move quickly on the controller as she continues to speak, attempting to evade Kirby away from her opponent’s character, Marth’s sword attacks.

“I spend a lot of my time doing school work. I have a full-time career. Video games help calm down at the end of the day. They’re fun, they’re light.”

The word “light” may be the opposite word that comes to mind for her significant other. Fred Distance. (An online username provided in lieu of his full name.) The username is displayed visibly across his T-shirt and on both sleeves of his shirt.

For Distance, gaming is more than a pastime, but a sport. “I get very competitive. It drives me to want to go further and try to win.”

As he speaks, he continues to watch Nicole play. He recounted how it felt to win a medal once in a tournament. He gave it to her to keep. Medals are nice, but what he really wants is a trophy. Better yet, he wants to get sponsored.

Distance’s arm gestured towards the surrounding players. “…To become known. That is what everyone is trying to do. To become sponsored.” Distance described how becoming sponsored can mean free items, being featured at gaming tournaments, and even paid travel to gaming events.

With an end-game as profitable as this, it’s a tempting dream for anyone to want to persue a career as a competitive gamer. This dream may have been what attracted Michael “Kibo” Ortiz, a Visual Arts major at Westchester Community College, to becoming a “competitive smasher.” He got his start as a “competitive smasher” only a week prior to Mercy Rushdown 3.

For Fred Distance, the trophy and sponsorship is what he seeks, but Ortiz has other goals. For some like Ortiz, bragging rights are a large motivating factor.  “ZeRo is on my hit list. I’m after all the top players,” says Ortiz

Gonzalo “ZeRo” Barrios is a Chilean professional Super Smash Bros. player. He is considered one of the best Super Smash Bros. gamers, and according to Esportsearnings.com made over $52,000 last year from playing.

Ortiz desperately wants to be able to say that he defeated ZeRo. “I want to destroy him. I hope ZeRo hears this. I want to money smoke him with Yoshi… I’m not training to beat him. I’m training to surpass him,” Ortiz said confidently. He understands that, in order to win, he has to begin training and competing somewhere, and he’s grateful that the Mercy Rushdown event is nearby.

This sentiment is backed by AJ Tignonsini, a sophomore Computer Arts major at Mercy College, “I don’t have to go frickin’ half way across the country just to get my ass kicked by ZeRo.”

In between matches, Tignonsini and Ortiz both agree that tournaments like Mercy Rushdown are a great way to get to know other people.

Tignonsini explains that video games, like other modern technologies and social media, can act as an icebreaker in meeting people within the electronic generation. “There are many ways to socialize, but in today’s day and age, we have all [this] technology,” he said. 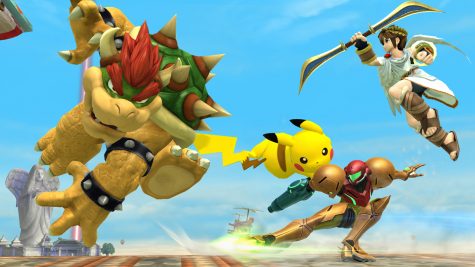 Ortiz further explains, “I used to be the anti-social guy. Then I found Smash and started playing. I got good at it. It made everything so much better.”

This feeling is not exclusive to people his age, says Ortiz, “I’ve seen everyone–business people, millionaires–playing Street. It’s such a beautiful event, even if sometimes people can get a little crazy,” said Ortiz laughing.

This sentiment is shared by Distance and Nicole. “What if you had no one really to connect with? There’s the opportunity right there,” says Distance.

To Nicole, Mercy Rushdown reminds her of similar events held at New Jersey Institute of Technology. NJIT is primarily a commuter college with a similar atmosphere to Mercy College. “It’s a great way to bring students on campus together, especially because the school I went to, NJIT, is mostly a commuter campus, so it’s harder to keep students [on campus],” she said.

As the clock ticks past 4 p.m., the tournament moves swiftly towards the Final Four. Among the Final Four are Ortiz and Tignonsini. Ortiz’ Greninja up against his competitors, Captain Falcon.

Both have given it all they’ve got, however, when Ortiz fails to block a combo attack knocking Greninja off the stage, the match is over. Ortiz has been unceremoniously defeated. With this loss, his goal of defeating ZeRo remains a fantasy–for now. 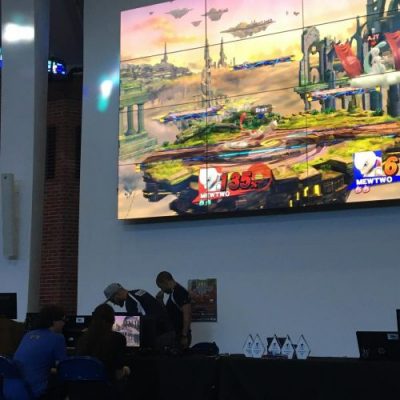 Tignonsini’s match ends soon after it begins. Mewtwo vs Mewtwo, but only one would win and the victorious Mewtwo was not Tignonsini’s. His character unable to make a direct attack, and was thrown off-stage twice, quickly ending the match.

For two matches high on the bracket, it did not stand out to the people watching. It became a part of a large cluster of conversations among the players and ongoing matches on the screens scattered about the Rotunda.

Conversations overheard ranged from one player telling another they should have used a combo attack instead of dodging, three friends organizing a carpool to a tournament in New York City, to competitors arranging rematches.

When asked about the people there and the passion they had Distance said, “E-Sports is bigger than most sports you watch at home. It’s just not on TV, it’s online.”

Giron striking a similar tone, “It’s sort of like sports. You know, when you watch football and games like that. You have brackets. You have upsets. It’s crazy and it’s a fun time.”