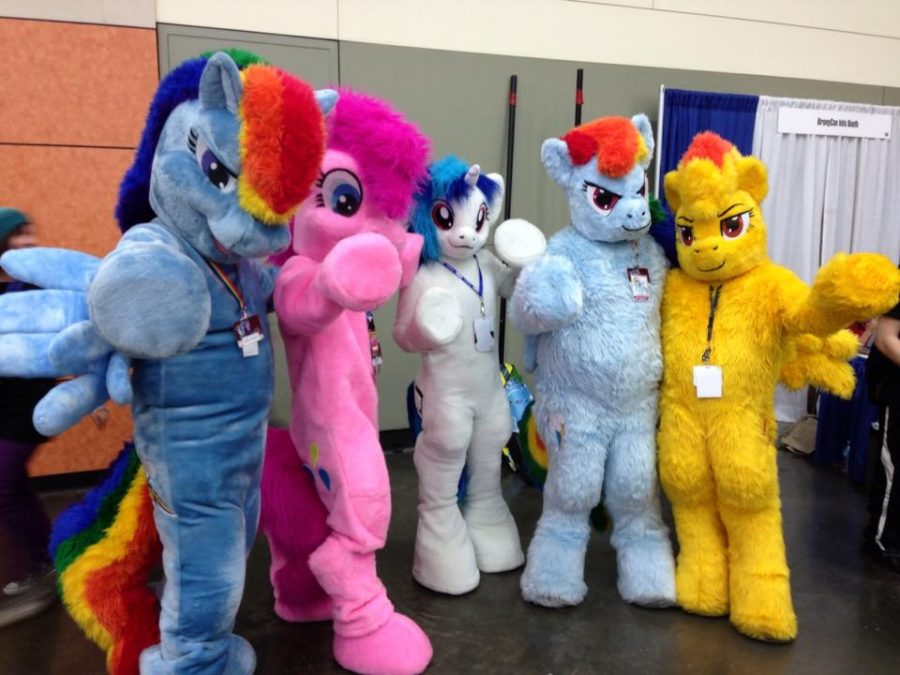 A teenage Juan Villa gazed around in awe at the sea of people clad in fuzzy cosplay suits. The Brooklyn music hall-turned-convention-space was swarming with hundreds of people all gathered for BronyCon 2012. Villa felt a sense of contentment among the other like-minded fans, who were all there to celebrate what they loved.

Smiling, Villa said to himself, “This is amazing.”

Juan Villa, a sophomore at Mercy College, is working towards receiving his Bachelor’s degree in Audio Engineering. He walks the halls, eats in the cafeteria and attends classes like any other student. The one aspect that distinguishes him from your average Maverick, is that he is, in fact, a brony.

A “brony” is the common term used to refer to the fandom of men who follow the popular kids television show My Little Pony: Friendship is Magic.

This subgroup of fans has been on the receiving end of much derision from outsiders, who cannot fathom why grown men would be so obsessed with a show that was originally marketed for little girls.

What Villa explains, is that the critics simply don’t get it.

“The Brony fandom is like any other fandom. The general population doesn’t understand,” he said.

Since the Netflix documentary, Bronies: The Extremely Unexpected Adult Fans of My Little Pony, came out in 2010, bronies have largely been stereotyped by those outside of the community as being weird, or disturbed for being so engrossed in such a seemingly childish hobby.

“I didn’t have a problem with the documentary, personally,” Villa stated as he explained this documentary gave others a chance “to understand who we are and what we are like.”

For many of us who may be wondering how a teenage (or older) male would happen to stumble upon this fandom in the first place, the answer is surprisingly simple.

For Villa, it was purely coincidental. One evening during his sophomore year of high school, he was casually flipping through the channels and stopped on an episode of My Little Pony: Friendship is Magic. For some reason, he still cannot quite pinpoint what peaked his interest.

“I kind of felt like something was missing [in my life],” said Villa.

Villa kept his newfound interest to himself until he found another classmate who shared his unique hobby. From there, he felt free to let his passion grow.

“It means something unique,” he explains, “It’s like anything else–going online, playing video games, studying, but it’s more personal.”

Like most within the “brony” community, Villa will tell you that he identifies with the positive messages in the cartoon, enjoys the plot, and has become invested in the characters. What he most enjoys, however, is the creative aspect that being a part of the fandom lends itself to.

The brony community does in fact consist of an impressive number of artists, writers and musicians. Villa attributes his engagement in the community to this fact. The hub of all things MLP is EquestriaDaily.com, where fans can submit original artwork, search for upcoming conventions and events, and even create threads for roleplaying with fellow bronies.

“For me, the brony fandom is the most active community. There’s a lot of music, a lot of writing, and the personal aspect–fans are nice generally,” Villa says.

The fandom offers people an inclusive community with a welcoming atmosphere and a chance to connect with others with the same interests.

He admits that as of recent years, he hasn’t had as much time to dedicate to the fandom. He has, however, created some of his own original artwork that he is eager to share.

Pulling out an iPhone from his pocket, Villa mumbles, “Oh, wrong phone.”

He then reaches into another pocket and retrieves a separate phone.

“One phone for the bronies, one for personal,” he says with a smile.

Artwork and personal camaraderie aside, this still begs the question of what is the draw?

The brony community is one of the most rapidly growing fanbases. Statistically, the fandom is largely male for a show typically intended for a young, female demographic.

Villa is unsure as to why the fandom is predominantly male. He admits that it is unusual that the intended demographic is not who is watching the show, but he emphasizes that it’s the same as being involved in any other fandom.

Whatever the reasoning may be, it seems as though bronies are here to stay. We may not understand it, but with all the hatred and negativity being circulated in today’s world, My Little Pony: Friendship is Magic may just be the beacon of positivity these men need.