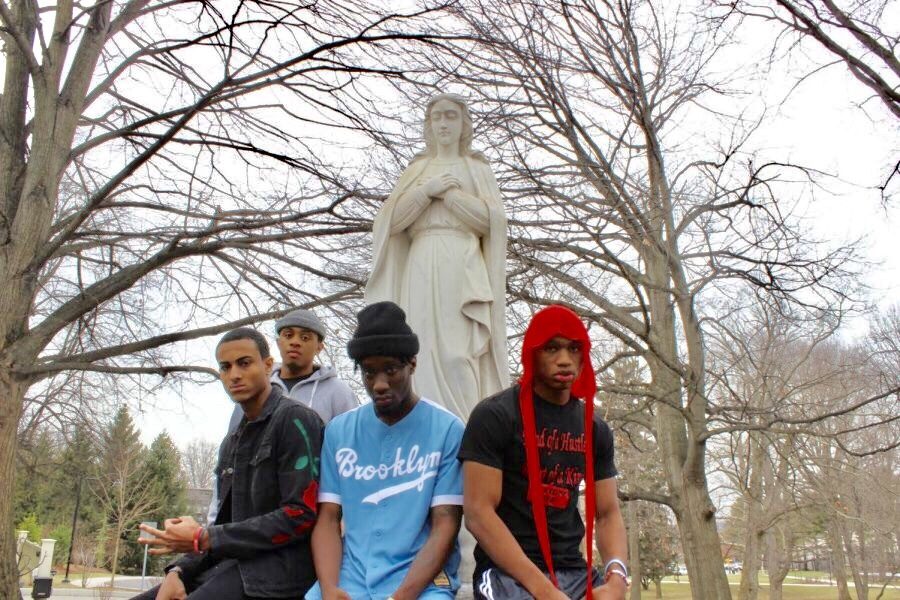 “Like horses in the Kentucky Derby, we only look forward at what’s ahead, rather than what’s behind us.”

These words, said by sophomore Kadeem Norville, make the defining statement of 3peat, one of Mercy’s “Big Three” rap groups, along with ODC and Plug.

With the rise of the “SoundCloud Rapper,” where anyone can enter the rap scene with some hope, three Mercy students from Brooklyn are aspiring to leave their own marks with not only fellow students, but for everyone back home who told them they couldn’t do it.

Despite 3peat’s formation only going back to around three months ago, the friendship amongst Deemo, Corleone, and Ape Baby extends back to when they were only known as Kadeem Norville, Alix Celestin, and Sam Akesson, who six years earlier were playing basketball at the now-defunct Canarsie High School in Brooklyn.

“We always wanted to do our own thing even when we were in the studio together, but we thought it’d be better if we combined our strengths together into one group.”

The three had already been working on various solo projects together since September. The issue was finding a working formula.

As later emphasized by Norville, “Alix and I were trying to getting a little bit of studio time, but it was taking us mad long to do a song. So we were like, ‘why don’t we just come together?’”

This continued for around two months. But once they met Music Technology major, Aaren Boyd aka Aarenwave, everything changed. Students within the program are given six hours a week of guaranteed studio time; approaching Boyd seemed like the next logical step. When they all approached each other with the idea of forming one group, it was quickly agreed on.

According to Boyd, the partnership seemed to benefit everyone, “I was just starting out, and it was like a, ‘I scratch your back, you scratch mine’ type of arrangement. And it’s like, a lot of the stuff you do, when you tell people it’s good or bad,  no matter what genre it is, becomes muscle memory. So the more you do it, the better you get at it. Now if I have the opportunity to record anybody, and if they’re willing to work, I’ll bring them in.”

The partnership mentioned by Boyd is what drives the group – it’s getting the best out of everyone that drives them to continue to work harder. But despite the friendship that already existed, getting to this point did not occur overnight.

“We came a long way man, a long way. You should have heard us when we first started; it was like, we used to butt heads a lot. I used to be on my beat, and someone would be on an old beat, it’d be like, ‘get out of the booth’, you know?,” said Norville.  “If you get in the booth and you start saying something wack, like, get out! We’re pulling you off the mic!”

Even after the group’s formation, problems continued to occur until the group had their breakout moment during the winter break. When the group claims that it all came together. Without a studio, they were in Celestin’s car.

“I’d pick them up, and I’d put the beats on my Bluetooth and just try to come up with something. It showed a lot of progress; we had to improvise with whatever we had and by the time the break was done, we all had completed verse for at least 10 songs. All we have to do now is record them and perfect them,” said the often quiet, yet impactful Celestin.

A lot of people were asking Aaren to record them, but he actually had another artist he was working with so his time was split. Studio time became every two weeks, and the band began to panic.

“We had to prove to [Aaren] that we deserve the studio time. That’s when we put our heads together,” said Norville, who produced a clip of the three in his car, rapping together.

Another issue that 3peat had to face was not a fear of criticism, but a fear of something much scarier: the booth. “It was a matter of getting comfortable in the booth. We’re usually comfortable with each other, that’s why we can criticize each other like that. But it was like, none of us have ever been in the booth before, and we were always writing rhymes in class, not doing work and stuff, but recording it is a whole other world.” said Akesson, before Norville added, “We thought we could get in the booth and just say it how we say it, but it’s harder than it looks.”

When asked about who the group views as their biggest inspiration was, it always came back to one group in particular: Migos. Formed in 2009, the group shared a few similar qualities to 3peat, with the most notable being that they all grew up together.

While the influence of Migos was undeniable to the group members, “They’re something special, they’re a whole rap group, and there’s not a lot of those out there. It’s a heavy influence on us.”

But the group emphasized that they are always looking to grow their game. 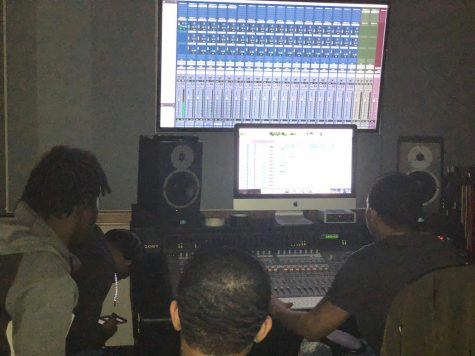 “I feel like, [Kadeem and Alix] put the fun vibe, and I’m more like, street. Where I come from, East New York, it’s bad. So my raps before that would talk about gun violence and all that stuff,” said Akesson. “We had to find a way to find stuff we do and incorporate it together.”

“Each song is different, but like, we all come from Brooklyn. We all have a common feel to [our music]. But I’ll let the listeners decide if they feel that type of vibe, that’s just how we give it off. That’s all we know. We can’t fake something we’re not.”

When asking about how public the project is, Akesson gave a passionate answer, “Our friends from school know about this, but we’re not telling our friends back home. It’s like crabs in a barrel, you know? They don’t want to support nothing we do until it’s good, like, ‘Nah bro? I didn’t know you could do that?’ They’re going to wait for us and be like ‘I didn’t know this was you?’”

Norville added, “Our friends back home hear about us and they go ‘Oh you make music? You trash.”

Celestin added, “That’s the thing about music in Brooklyn; people are so quick to put you down, because they’re so many people doing it, and not everyone is good. Everyone just drags you down.”

The group mentioned that making a song was difficult to do, so even if it’s good or bad, one has to appreciate and respect the work that went into it.

Despite the group’s short tenure, it had seemed that they already had become much closer. It is not only reflected in their answers, which were always met in immediate agreement, but even when other groups were discussed. With Akesson not even aware of Mercy having multiple groups, it kept the discussion focused on 3peat.

“We’re not even competitive. Not to discredit them or anything.” As said by Akesson, it is imperative to the group’s mentality; with the focus only on themselves, their eyes are always on the prize. “Like we have our own issues, Kadeem was [enjoying his work] and he was walking around the cafe. As soon as I saw him, I told him his verse was wack, and that ‘Mine’s better than yours.’ It does get competitive [amongst us] on whose verse can be better; it pushes the next verse. Like his verse pushed mine to be better.”

Using copyright-free beats, the music could still have an original vibe that allowed them to sound unique. There are plans to create their own. While the work that was being done involved a serious amount of micromanagement, the passion that drove them forward was not only encouraging for the group’s morale, but for the work itself. No comment goes unnoticed.

Next up is the immediate focus on the mixtape. Despite only having one song completed with “at least eight or nine,” projected to be in the final version that is set to drop March 27, they aren’t very concerned. “We’re working on it. We’re pushing for it. We set the deadline for ourselves.”

Then it’s Mercy’s Spring Fling. The group is aiming to perform. One project at a time, they remember, but vision and grand plans are a necessity in this business.

With the interview was completed, the trio was already back to work. The joking was over. It was back to the grind.