If you like two things enough, why not just put them together? For Nick Fraser, one of the co-founders of Bands FC, he took that thinking to heart. 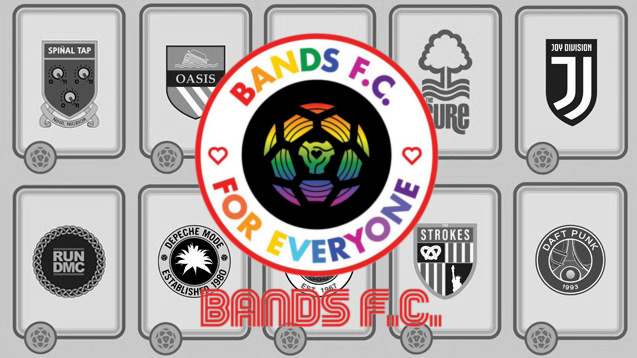 If one took a leisure stroll through SoHo, Manhattan on Sept. 29, one would enjoy your typical SoHo atmosphere of cobblestone roads, trendy restaurants, and an overall laid-back vibe. It isn’t until that person took a walk past the Red Telephone Box outside of the Ben Sherman on 130 Greene Street, that they would see what the real main event of that day was.

Within the said store, one would be a witness to a massive group of people. Funk music was blasting from the DJ Booth, with Tim Burgess, lead singer of The Charlatans, controlling the vibe of the room through music. On the walls, were the best of the many badges that had been made previously.

With brownies featuring the logos, beautifully designed Bands FC jerseys, and free alcohol, the vibe within the room was one of a good time.

All of this would leave anyone who didn’t already know why everyone was there confused. These spectators weren’t here to buy their favorite British-styled clothing made primarily for men, in fact, they weren’t there to buy anything at all.

What they were there for was to see an art show unlike any other. Behind all of this, was a friendly, nervous, and eager man waiting for the next chapter of his project to begin. This man’s name was Nick Fraser, and he is one mastermind behind Bands FC.

“Ben Sherman had gotten in touch and here we are. They seem to have an eye on stuff that is Anglophile, and they said, come here, and they’d be our guide. They said it would work here compared to, well, I’m actually not allowed to say other clothing brands!”

Music and sports are two undeniable factors of life that nearly everyone enjoys. The stories they tell, the feelings they provoke, and the memories that are created, are some of the greatest parts of day-to-day life. So when three men were talking after a Charlatans show, they stumbled upon a revelation.

With the Fifa World Cup set to take place in a short amount of time, the three joked about how for three weeks, bands would practically go irrelevant unless they made themselves “more football-y.” And it was those jokes that created the idea: what if soccer teams were bands? What if bands were soccer teams?

Collaborating plus graphic design, and Bands FC was formed (“FC,” for those not familiar, stands for Football Club.) The concept would be simple, take a band logo and soccer badge, put them together.

Only four months later, and the group has watched their idea explode.

With the Bands FC Twitter page (@_Bands_FC) creation coming only this past June, Nick Fraser and Mark Liptrott, two of the three men that featured in the original conversation, could not have imagined what was to come.

In a short time period, the project has not only received praise from its rapidly growing 40k+ following, but has also received media coverage from The Guardian, BBC, NME, Planet Football, and many more.

Along with this, the group has an exhibit running in two countries (with potentially “more to come,”) a festival that the group themselves are curating, and potential partnerships with soccer leagues like the U.S.’ own Major League Soccer.

With Nick Fraser playing more of a social media role while Mark Liptrott is the primary badge designer, the two have struck gold upon an idea that even Fraser was skeptical about. “It’s sort of dumb in a way. No disrespect to the idea, but it’s sort of simple and a bit goofy, but yeah, it feels like that. Every day, when I walk around New York City, I think, ‘How did we get here?’”

When speaking to Fraser about the nitty-gritty of the project, he was quick to mention how the project lends itself to a lot of breathing room in terms of creativity, “The first [badge] ever was the Liverpool and the Echo & the Bunnymen one. The second ever was the Wu-Tang Clan for Wolverhampton Wanderers and both really showed us what was possible because one has no words on it, and the other one has a lot of clues hidden on it, so there’s the simplicity and the complicated all happening at the same time.”

It’s the simple-minded approach that makes the project move along smoothly and easily. This applies for when the two look to decide which soccer club and band/artist to put together, “Sometimes it’s just really simple. Throbbing Gristle, were Partick Thistle, because they rhyme, that was one of Tim Burgess’ ideas. So there’s complicated, simple, and everything in between. You don’t necessarily know it as the viewer, but we do those ‘How to’ ones and share those thoughts occasionally.” 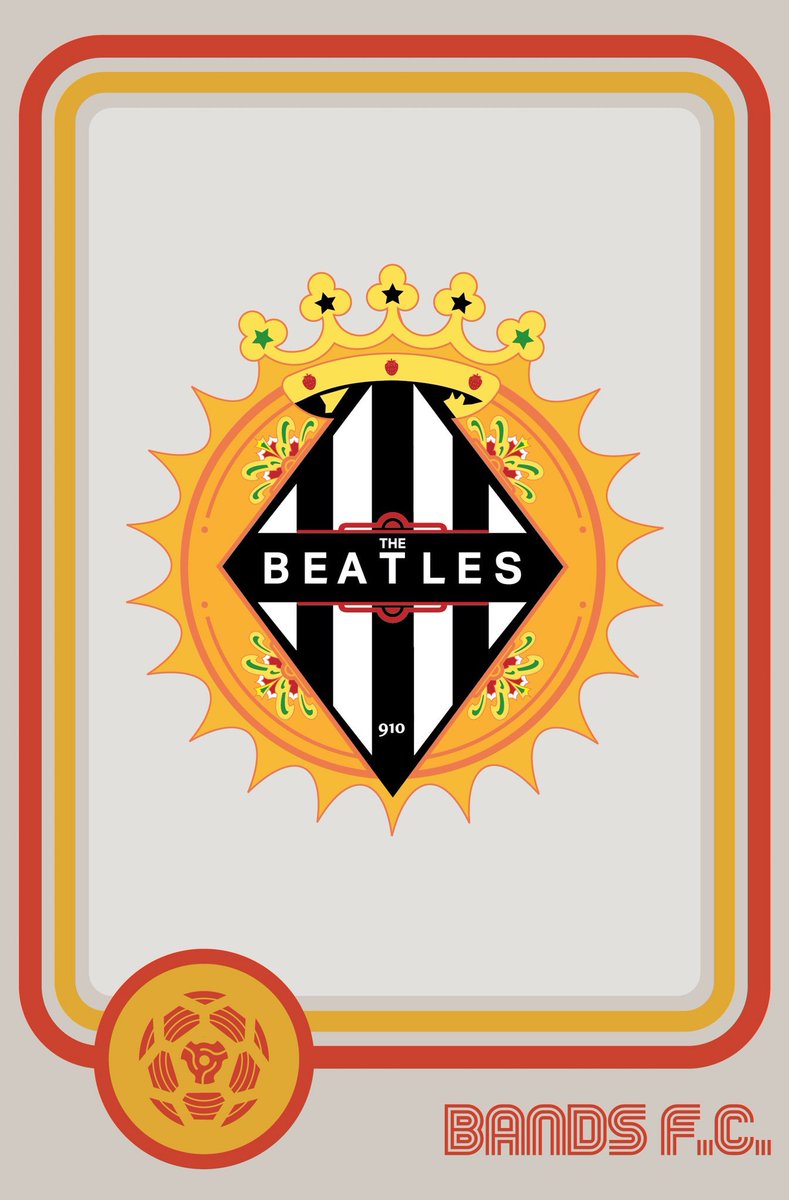 This shows, as the most recurring comments often end up having to do with the clues within the badge. Look at The Beatles + Villarreal badge, for example; it’s full of easter eggs and other hidden details that really force you to not only always be looking, but to know the history of the band or artist, it’s a double whammy that is fun for sports and music fanatics.

The ‘910’ is a direct reference to The Beatles’ song “One after 909,” or the five stars, which is a representation of the Fab Four plus George Martin, who played a huge role within the group. The three being black is due to the three of the five having passed away. Plus, Villareal’s nickname is “The Yellow Submarine.”

“Some people get it straight away, but some like to work it out and feel good when they do!”

The time frame for an average badge can be anywhere from two minutes to two weeks, with one’s like Radiohead + Oxford United (which Fraser claimed was the hardest to make), taking a lot of thought and time into creating. Then you have ones such as Monaco + AS Monaco taking little to no thought.

For Fraser, it didn’t take long for him to recall his favorite badge(s). “Yeah, the Echo & the Bunnymen and the Wu-Tang Clan ones – they were the first ones shared. It’s like when you have children, you really love the first one or two, but then you stop loving them after that! But I do love them all! And there are ones now, like Prefab Sprout, where it’s just like ‘wow!’ We based it off of Albuquerque, they have a song that goes, ‘Up from suede shoes, to my baby blues, Hot dog, jumping frog, Albuquerque.’ I know that was badly sung, but that was the trigger!”

The rise in popularity has been nothing short of remarkable. For a project that was created just for their friends, it has taken off in ways nobody could’ve initially expected. The turning point for Bands FC came after contacting NME, “Every single person we showed was like ‘Oh my goodness me!’ So we sent them to the NME, the New Musical Express, and thought they’d say, ‘That’s great, but we are you going to do with them?’ instead, they went, ‘Can we run a feature on this?’ and that was the jumpoff point. It wasn’t there feature necessarily, but it was the fact that they were wowed by this.”

To this day, the group still stand true to themselves about imaging this ever happening, “No, we’ve been asked a couple of times. No. No. No. If anybody would have imagined this, they would need to be put in some kind of secure unit, because how could you? I’m on the other side of the world, talking to you about this now.”

The day before this exhibit, Fraser was invited to go to the MLS offices in New York City to speak with officials from America’s premier soccer league regarding some plans. Despite how official this would seem to most people, he still got so excited when hearing they were fans of the product, that he gave them free pins.

The SoHo exhibit carried much more than just art. It showcased how not only the simplest ideas can grow into something larger, but how with self-belief, it can make any project greater.

For the future of Bands FC, Fraser and Liptrott are primarily focused on their festival and the two exhibits they have running in the United States and England. But the two are always looking for extra projects, with them selling Pulp + Sheffield Wednesday kits set to raise money for the Sheffield Children’s Hospital, for example. Along with this, they’ve also done charity shows with The Charlatans and Public Service Broadcasting.

“We’re always looking, so anyone who has a large garage in Sacramento or storage facility in Omaha, get us on Twitter!”