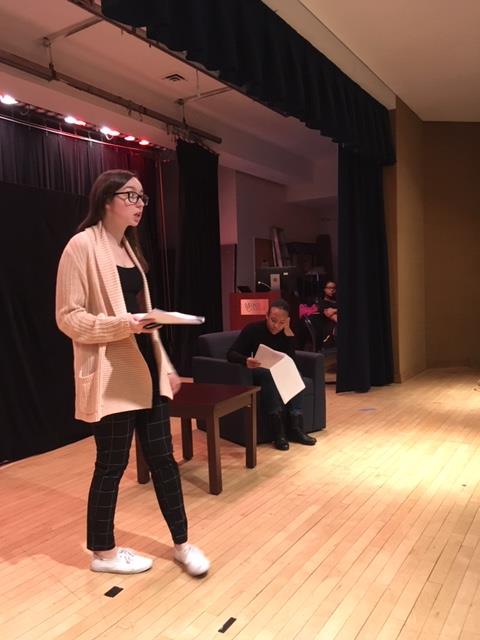 The Mercy College Theater Club hosted a unique event in the Lecture Hall on the Dobbs Ferry campus on Nov. 30. Many students who had written some original plays on their own, performed a staged reading for seven of the individual plays that they have been working on all semester.

The Theater Club is run by Prof. Marc Palmieri. Palmieri is a screenwriter, playwright, actor, and director who has been teaching at Mercy College for two years.

Palmieri teaches an Introduction to Acting class at Mercy’s Bronx campus and he has previously worked at The City College of New York. He has taught a multitude of courses including playwriting, creative writing, advanced fiction, as well as modern and postmodern drama.

The staged reading was very well performed by the group of young actors and actresses in the theater club. There were only a few times that they made a mistake, which was surprising considering the limited rehearsal time that the group had before the actual show began.

“The staged reading is an early exercise of play development. The purpose is to give the playwright a visual idea of the play,” Palmieri stated. 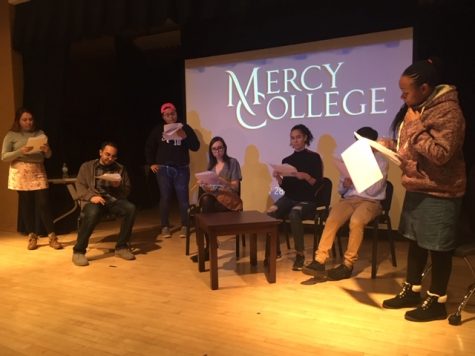 “We really only started rehearsing these scripts today. We started at around one in the afternoon and did 45 minute rehearsals for each play,” said Palmieri.

Although they had only rehearsed the plays for a short period of time, many of the students had been working on them throughout the semester, according to Palmieri.

“These plays came out of the playwriting class where they are produced, and we began to work on the craft and technical formatting. They also rehearse some plays in class to help them learn about what they have written,” stated Palmieri. “We had been working on these scripts in class and the students would practice them together.”

All of the seven plays that were rehearsed at the staged reading were very well written and performed by the cast.

One of the plays, titled “Deadly Mistake” caught the attention of many. It showcased the Grim Reaper, also known as Death, working for “higher-ups” who give him the names of people to kill.

In this play, the Grim Reaper accidentally attempts to kill the wrong person. The man in question asks him to prove that he is the real Grim Reaper. After telling the man information about his life that no one else would know, he realizes that he has come face to face with Death itself. However, the Grim Reaper eventually learns he had the wrong person and departs. Leaving the man in shock at what had just occurred.

The Grim Reaper was played by Jack Hazan. Hazan is a Music Technology major who is currently finishing up his final semester at Mercy College.

Hazan has never acted before and had only recently joined the Theater Club. “I never really thought I would be into acting, but I really started enjoying the class so I decided to join the Theater Club. I really enjoyed the staged reading and everyone did a great job tonight.”

Many of the other performers were taking their first crack at writing or acting as well. “Experience runs a gamut here,” Palmieri said. “None of them have ever written plays before.”

Although Hazan has never acted before he does have experience performing as a DJ.

“Performing at a venue and playing music is not all that different from performing a play on stage. You’re there to put on a good show for the crowd. Acting obviously involves more talking but it’s also about the way you present yourself on stage, whereas music is more about concentration. Performing comes from the heart,” said Hazan.

Palmieri couldn’t be more thrilled with the enthusiasm of the students.

“It’s wonderful to see students taking this on for the first time, and it really helps improve oneself as a communicator and listener,” said Palmieri.

Palmieri also said that his experience working with the theater club has been very rewarding, and that he is excited to be involved with the Theater Club here at Mercy College.

The Mercy College Theater Club will be performing a show next semester during the month of April.