#TMI: Social Media Is Not A Social Psychiatrist 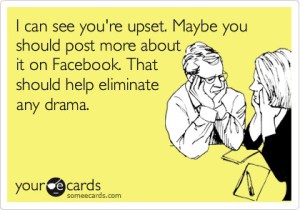 Social media has become the most in-expensive therapy session, and several are taking advantage of this service.

Whether you are going through a turmoil in your life, want to express your voice about politics, or just want to express how you feel about a conflict you’re having with someone, social media has become the way to let it out.

But why choose social media to vent?

One reason experts believe is because it’s a quick and easy solution to express how you feel about a certain topic with a sure-fire way to get a response and indulge in conversation with someone, or express an emotional feeling towards a certain someone, and do it subliminally.

Freshman business major, John Young, thinks it’s “because they have no one else to tell.”

You can write what you want, however much you want, and you will never have to see the reader’s reaction to it. There is even an option on Facebook to control who cannot see the post.

However, these rant posts aren’t something that everyone necessarily enjoy reading, so while the author of the post does not have to necessarily physically see the emotional reaction, people will just as willingly post their negative response.

“If people are posting things that are inappropriate, or just too much information, they probably get more negative feedback. Or the post will just be ignored and not acknowledged by anyone else. It also depends on who your social media ‘friends’ are. I see people posting things that they should really be telling a therapist, and their friends enable it,” Pupkin expressed.

Senior Criminal Justice major, Sal Palumbo, who has not resorted to social media to relieve inner-conflicts, also agrees that the feedback one gets “depends on what they’re posting.”

Another reason people use social media as a resort for self-expression is because the post is going to reach out to the hundreds of people on your friend list and to your followers.

If it’s an opinion-based question, there are going to be several reactions to the original post, thus adding interaction between strangers and friends about the topic.

Young believes most posts on social media come back negative for the reason that these people can be considered “annoying.”

Freshman criminal justice major, Tyler Cinelli, says that even though he has resorted to social media to vent himself, he does get sort of aggravated, “if I don’t know the person too well.”

Some people, after getting too aggravated, make the choice as far as deleting the person off social media so they don’t have to see the posts anymore.

Cinelli, Young, Pupkin, and Palumbo have all made that choice at some point.

“More often, I delete people for posting something stupid or offensive. I also think of it be kind of counter-productive, in the sense that people just rant on social media instead of confronting their problems head on,” is Pupkin’s opinion.

“I don’t particularly like it when I see a post like ‘my boyfriend and I just broke up and I really need everyone’s support right now’,” Pupkin mocked.

So, getting all the negative feelings out on social media will make you feel better, right?

Dr. Willard Gaylin, a New York psychiatrist who is president of the Hastings Center in Hastings-on-Hudson, N.Y., calls the ventilation of anger ”a form of public littering.”

He explained in an interview with the New York Times, ”Even if ventilation did relieve everything, which it does not, it would still not be justified.”

It’s obvious that social media experiences more negative posts than positive, but posts aren’t only used to complain. They can also be used to state something exciting happening in their lives, like a promotion at work, a family celebration, or achieving a personal accomplishment.

Shaw, who struggled a family tragedy, posted updates on her brother’s recovery from cancer letting everyone how his treatments went, and the next stage in recovery.

“I am guilty of posting things about my personal issues, but that’s because so many people would ask me in person already about his progress so I just figured social media would be the best outlet so I can inform everyone at once,” Shaw indicated.

“I certainly have (used social media to vent). It is somewhat reassuring when people ‘like’ or comment on your post in solidarity. It makes you feel like you’re not alone, like there are other people who feel the same way,” said Pupkin.

There are sponsored posts on Facebook that help people show their support for the military, or cancer patients, or even animals getting a second life after years of abuse.

Some posts can also be very entertaining, because everyday people aren’t the only ones who use social media to vent. Celebrities use it as well, and some more than others.

Celebrities that have been found guilty of this for example are Amanda Bynes, Kanye West. These posts have even caused celebrity drama. Bynes’ post are usually pertaining to the microchips in her head that are causing her to say or do certain things, and West uses it to express how amazing he is.

Then there are the reality stars that use it to vent about their lives as it’s being seen by millions of people on television, or their feelings during the episode that is airing at that moment.

Pupkin expressed, “Celebrities shouldn’t have any privileges that regular people don’t have just because of who they are.”

But people still eat it up; they love seeing what their favorite, or least favorite, celebrities or reality stars have to say and what they’re feeling. Some may say that’s because they will feel less inferior to people, especially celebrities, because they are going through turmoil as well. Others go out of their way to even make a negative comment on what the celebrity said, or their actions.

“That’s not an excuse for it to be okay to post your dirty laundry for everyone to see,” expresses Shaw. “People follow in the footsteps of celebrities because they think what they’re doing is acceptable.”

People often bring up the question of why airing everything out to dry over social media is okay, and if people should continue to be allowed to use it for that reason.

“I suppose people have the right to use social media however they like, but damn, instead of complaining on Facebook to no avail, maybe you should talk to whoever you have a problem with or see a therapist,” is Pupkin’s opinion.

Everyone is guilty about having at least one or two ventilation sessions over social media, whether it was Twitter, Facebook and Tumblr. It seems as though social media has become an outlet for those who are going through a rough patch in their life, a one-way therapy session.

Because of the over-population of “dirty laundry” on social media, websites have been created for the specific purpose of venting about your workplace, school, friends and family issues.

It isn’t Facebook or Twitter, actually. For a list of these websites, you can visit www.mashable.com, and the options are listed in the Social Media tab.

Not only have websites been created, but there’s also “an app for that.” You are able to download an app on to your Android or iPhone called Vent.

In Vent’s introduction, it describes the app as an anonymous social network designed for people to connect, share, and express some of the more frustrating aspects of life.

Advice that is worth having or following doesn’t always come from those who know you the best, like your friends or family. Something personal should not always be aired for everyone to see over social media.