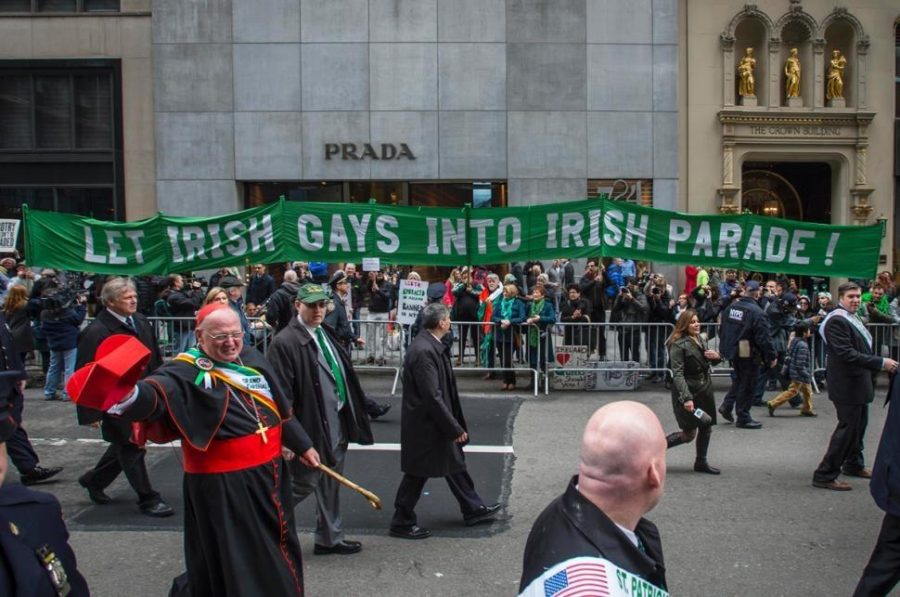 In 1764, twelve years before the Declaration of Independence was signed, a group of Irish soldiers marched up Fifth Avenue on March 17 to display their prolific pride of faith, heritage and culture. What may have originally seemed to be an irrelevant and insignificant display, lead to what is now one of the biggest cultural demonstrations in the world, more commonly known as the New York City St. Patrick’s Day Parade.

Though the celebrations originated in New York, the contagious tradition has spread throughout the world. St. Patrick is now commemorated in several countries, including Canada, Great Britain, Russia and even Japan—just to name a few.

The march historically includes members of the police department, fire department, armed forces, and marching bands from around the country. The parade takes place between 44th Street and 79th Street. It has welcomed people from around the globe to witness the largest parade in the world.

While spectators remain clad in green attire—a staple in the Irish tradition—some factors of the parade have begun to change, as the event and our American culture continue to evolve over time. Out of the approximate 200,000 marchers who participate in the parade annually, this year however, there would be a new banner to hang and migrate up the avenue.

For over 250 years, the homosexual community has been forbidden from marching with a banner in the parade, after all, it is a celebration derived from Catholicism. Yet in 2015, the first LGBT (Lesbian, Gay, Bisexual and Transgender) banner would make its debut.

This year for the first time, gay marchers were welcomed on Fifth Avenue. While this may sound like an innocent attempt to unify cultures, it has been deemed a dicey subject amongst politicians and parade proprietors.

The LGBT group was composed of NBC affiliates and employees, a fitting group given that NBC does the annual broadcast of the parade. However, the group was not shown on their broadcast as they marched later in the evening.

“I think it is about time that the LGBT community took their stand in the St. Patrick’s Day Parade considering the fact that the Scottish pipe bands have been giving us an open invite for years now,” said Kevin Bass, a Mercy College senior.

Despite the acceptance of the group this past year, New York City mayor Bill de Blasio boycotted the parade for the second year in a row, due to the prior exclusion of gay marchers. De Blasio has shined a marring light upon the parade, demanding a gay presence and still choosing to not partake in the event as every other mayor had done in the past.

To make tensions even more heightened, the 2015 Grand Marshal was none other than Timothy Cardinal Dolan, the Archbishop of the Archdiocese of New York, who is a direct descendant of the Roman Catholic Church. De Blasio put the Cardinal in a tough position to agree to be the Grand Marshal as homosexuality is strictly prohibited in the Catholic religion.

Due to the outspoken disapproval of de Blasio, the parade also lost two of their most generous sponsors, Guinness and Heineken. Though this may sound insignificant, it put the New York City parade in jeopardy. The parade is financed through fundraisers and donations; it receives no financial support from the city. Last year birthed the St. Patrick’s Day Foundation, a non-profit established to fund the parade as it is in dire need for supporters to ensure the historic march up Fifth Avenue.

As many people in the gay community see their participation in the St. Patrick’s Day Parade a triumph, parade executives feel that it is unwarranted as the gay community has their own parade without a particular Irish presence.

“There is another parade in New York City that celebrates being gay and being lesbian, and that’s the gay pride parade…our parade is specifically for a celebration of our Irish heritage” said Hilary Beirne, Chairman of the St. Patrick’s Day Foundation and Executive Secretary of the parade.

Although LGBT was included in this year’s event, and tensions have seemed to be alleviated, it has caused uproar within the Irish community as the parade has lost numerous supporters due to this compromise. It is fair to say that with every resolved issue another has sprouted leaving many questions to be answered and addressed next year.

Whether people believe there should be a gay presence or not in the St. Patrick’s Day Parade, there now has been, with no obvious harm inflicted. With the New York City parade being so iconic and a prime example for parades around the world perhaps more gay groups will march next year, not only in New York, but also around the world.

St. Patrick’s Day is a special day in America; it congregates people of all walks of life and is a direct representation of what America is and who we are as people. It is not about the green beer or the corned beef and cabbage as much as it is showing our shared appreciation of freedom and unity. Despite the sexual orientation of marchers or the mere 3,000,000 spectators, remember that everyone is Irish on St. Patrick’s Day.