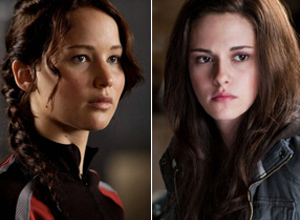 I keep reading articles about “Hunger Games” being compared to “Twilight”. I honestly see no comparison.

Each book series is on a totally different level.

Yes, both have a twisted love story. In “Twilight”, the girl is in love with a vampire and a werewolf. She fails to make up her mind and wants to string both along until she realizes that she is meant to be a vampire (I wish a vampire would come bite me so I could live forever and explore the world, if I were a vampire I would survive the said apocalypse. Zombies would not stand a chance near me.)  In the “Hunger Games”, the girl is in love with two fairly attractive (according to the descriptions in the books) boys. Yet this love story is twisted by (spoiler alert) the actual “Hunger Games” where the girl and one of the boys have to fight until one of them is dead. Interesting twist.

Other than the fact that there are love triangles in both books, nothing else can be compared.

In the “Twilight Saga”, (yes, I have been falling into the hype of the love story but I’m a girly-girl at heart so I can’t help myself) Bella basically has mental issues to begin with: her infatuation with trying to figure out what Edward is and if he will eat her and trying to balance loving Jacob without Edward knowing. She fails.

But besides this, I can honestly say that the first book was terrible. It took me one week to get past the first chapter. I wanted to read it before I saw the movies. The book lacked proper grammar and sentence structure. Reading the first book was like a chore. But I was determined.

The movie sucked as well. I wonder where I started to fall in love with the books. I think it was when I started to read the second one, “New Moon”. Here is where Edward left. Oops, another spoiler. I’m sure male readers aren’t too upset I ruined it for them. Well, Edward leaves and somehow I felt Bella’s pain. Breakups are hard. Any girl could relate to her. To give all of yourself to a guy and he just leaves. That does some damage.

“New Moon,” the movie was not that bad. Every girl probably did some damage to the movie theater seats when Jacob took off his shirt. I felt like it was directed better.

“Eclipse” and “Breaking Dawn” are the book worth reading. It’s the ones that everyone had been waiting for. The life and death battle between Edward and Victoria. The Wedding. The Sex. The Baby. I won’t say anymore. I do not want to ruin the second half of Breaking Dawn.

If a book is being made into a movie, I feel everyone needs to read the book before seeing the movie. The book gives so much more detail that is essential to the plot. It annoys me when I’m in the movie theater and someone near me is talking out loud how they are confused or they want to know what happens next. READ THE BOOK AND SHUT UP DURING THE MOVIE!

The only problem about reading the book before seeing the movie for me, is that I’m the type of person that will count the flaws. I will get mad if something is not done right or if something is not in the movie that should be. Oh if this was about “Harry Potter”, I think you guys would hate me. I could probably write over a million words on what was wrong with each movie. But none the less, Each “Harry Potter” film was done amazing. I’m a huge “Harry Potter” nerd. Also, “Star Wars” and “Lord of the Rings”.

Well now…where was I going with this? I got a tad bit carried away.

Yes, the “Twilight Saga” can not be compared to the “Hunger Game” trilogy. Each book of the “Twilight Saga” must have been edited by five-year-olds. Sometimes the plot did not make sense and it’s a huge mess. Sorry Stephenie Meyer- I’m still a huge fan of the books and movies despite the flaws.

Now, with the “Hunger Games”. Our heroin, Katniss, is a feminist. She has been taking care of her family since her father had passed away. She does not want to marry or bare children. She wants to take care of her little sister until she is old enough to take care of herself than live alone. She hunts, trades and provides for her family. Without going into too much detail because I do not want to ruin this book at all, she is a role model.

Katniss volunteers herself into the “Hunger Games” in place of her little sister. Without giving too much away again, in the “Hunger Games” children between the ages of 12 – 18 enter an arena and fight to the death. There is only one victor.

There alone, the “Hunger Games” has a better plot line than “Twilight”. It’s not a hopeless romantic book. It’s a twisted adventure with some romance. But romance is not the main focus.

I’m not going to into more details about the book because I know the movie is coming out next week and I know people are not going to read the book before than. I am really in love with the books, so I will not give anything anyway.

The sentence structure, grammar and plot are done way better then “Twilight”. Suzanna Collins has my full attention when I’m reading those books. I scream and cry while reading. That’s when I know a book is good. When my heart races, I can’t control my reactions, and I feel like I’m apart of the book.

“Twilight” never did that to me. I slowly feel our relationship crumbling, “Twilight”. I won’t cry if you don’t cry.

To me, “Hunger Games” is better then “Twilight” and I want people to stop putting them on the same level. Bella and Katniss are not anywhere near the same person. Katniss is a true feminist. I think she is one of the first feminist I’ve seen in a long time. Well I mean in books, I have not seen a strong female character recently until I read the “Hunger Games”.

As a parting, I suggest everyone go see the “Hunger Games” next week. For the guys who may be worried about it being another “Twilight”. It’s not, there is a lot of blood and violence to fill your hearts. Very action packed. You’ll have a good time I promise, if not you can personally email at; [email protected] and complain to me.

Maybe I can persuade you other wise. =]

For those who have not read this book already, please do, you won’t regret it.

Have a lovely day everyone.