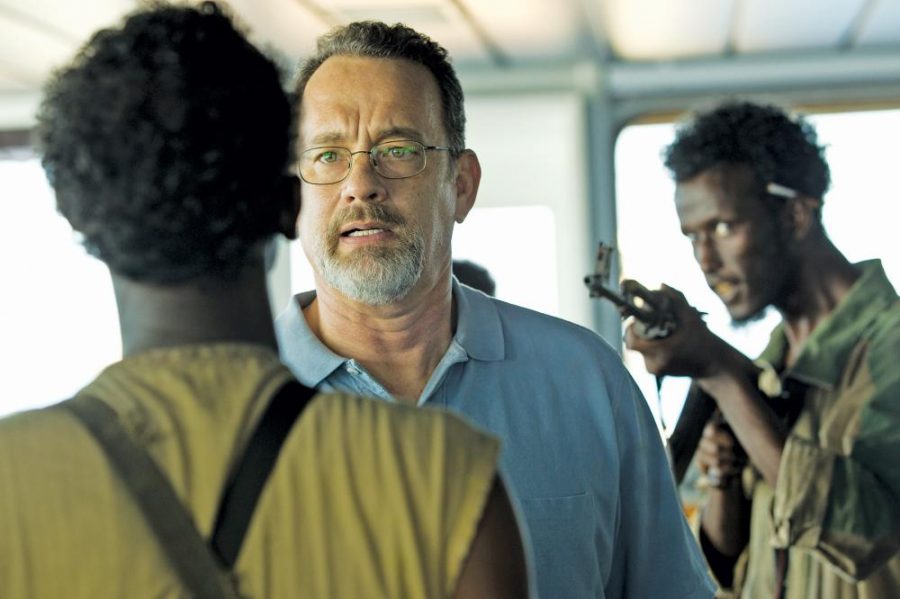 As the U.S Maersk Alabama slowly herds along the Somali coast line and the ship slowly visions two small undetected objects in their radar the rest of the film well exceed your exceptions. This is an intense true story about Captain Richard Phillips and the 2009 hijacking of the Somali pirates of a US cargo ship.  This film is an adaption of a real story with top level acting, it’ll be considered for Oscar nominations or at least Hank should.

If you remember the news accounts, you remember the outcome (you won’t hear about it here). Yet there’s a big difference between knowing about something and experiencing it. In “Captain Phillips,” director Paul Greengrass gets viewers to place their bets on their emotions. You feel enough and try to appreciate what Phillips went through yet you only can’t stand it. This is an intense and complicated story, and the film doesn’t rush it. It lets it unfold and build, carefully.

Phillips must deal with four men carrying machine guns, whose culture he doesn’t understand, and who are all chewing khat, a plant that creates a sense of aggression and euphoria. Only one of the men speaks enough English to carry on a possible conversation, and that man played by Barkhad Abdi, is ruthless and attentive to any hint of pretending. Good acting doesn’t happen for nothing. Abdi’s aggressiveness and disturbing atmosphere helps bring out Hanks great performance.

Through the film ask you’re self this question? Why is Phillips so calm through these situations? Phillips had to be brilliant. He had to look the pirates straight in the face and lie to them, try to get them to believe him, even when they were expecting lies. Then I remembered he is the Captain of this ship. Phillips is not just somebody who had something extraordinary happen to him. He’s an interesting person in his own right. That, as much as anything else, makes “Captain Phillips” more than a very good thriller, but rather a story of a character under pressure, thrown into a corner by executioners who want nothing more than his ship and everything on it.

Plenty to see about container ships, pirates, and the workings of the U.S. Navy. Since the military operation was big news in April 2009, the outcome is no surprise. However, if the film accurately ends the way the real situation ended, then it is more in depth that generally reported. The last 20 minutes brings the film the long awaited action you want to see in this thriller drama.

It is Tom hanks as sea which we all might have loved in 1995’S Cast Away. In yet another lost at sea film, yet this time with different circumstances, Hank has a long line of diverse character studies, does a wonderful job as Captain Richard Phillips and is the voice of reason and logic, trying to inspire self-bravery and maintain order in an emotional, noisy and panic motion picture.  4/5****