From Bang Bang to the Big Bang in Luc Besson’s, ‘Lucy’ 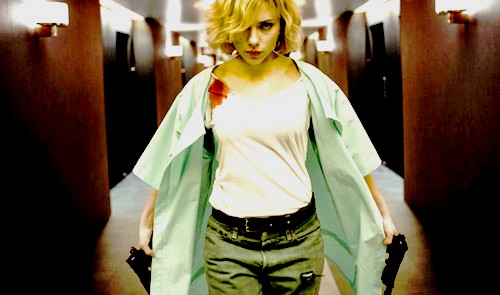 It’s like the Scarecrow in Wizard of Oz said:

“I could wile away the hours,conferrin’ with the flowers, consultin’ with the rain. And my head I’d be scratchin’, while my thoughts were busy hatchin’, if I only had a brain.”

Luc Besson (La Femme Nikita, Leon: The Professional, The Fifth Element) gets a good laugh at us moviegoers in his latest movie, ‘Lucy’, which earned (it’s spot as a front runner and $44 million over it’s opening weekend) in the box office but encouraged common criticism. The plot promised a lot more bang bang and a little less Big Bang, but was it worth the watch?

Lucy revolves around a not so wily woman (cue the blondebombshell, who happens to be Scarlett Johannson) who winds up hostage held by a Korean mob in present day Taipei, in need of another drug mule. The designer drug, synthetic substance CPH4, is stowed in a sack and surgically stashed into Lucy’s lower stomach. With an assigned agenda, Lucy is to transport this designer drug to her destination, though she is aimlessly intercepted and roused,roughed and beaten to wher the stowed stash breaks and streams through her system.

Seemingly playing up to this point was predictable, well-perceived and more importantly, well played out. Drug deal, pack of prowling mob men, and the non-willing chump caught in middle of the mix. All bits of cliché believability and then the tables turn with the not-so subtle sci-fi, asLucy is able to access and demonstrate the dormant divisions of her (from thispoint forward) adapting boundless brain and attributing herself with a lack oflimitations in logic, physical and perceptual. Adapting (and arming) her withacuity in pain insusceptibility, superhuman sensory sensitivity, modifying hermanipulation of matter and an increase of cognitive command. Which, of course,all allow her brain to behold the conundrum of curiosity, does time truly exist? Is there an explanation for our existence? And is our essence endless?

Unlike such movies as ‘The Matrix’ and ‘Limitless’, which share in on a similar plot (and a common comparison) in that, the modern man can become ‘more than man’ by letting go of mankind’s limitations, ‘Lucy’streams a sense beyond the boundaries self awareness and the phenomenal powerspromised with such. It indulges in on delving deeper and a bit beyond theclichés, past the fast-paced action and the evolutionary special effects, theamusing or audacious commentary, the constant cut scenes of predators and prey and ‘evolution to revolution’. ‘Lucy’ begins with “life was given to us abillion years ago, what have we done with it,” encouraging us from the get-goto consider the panorama of possibility, subsequently showcasing the societyand social system we have structured from scratch.

Paving a path of focus from the start, with Lucy (the prey)hurdled into the hands of Korean mob men (the predators). Besson sets the stageby subtle clues of what’s in store with Lucy wearing a Cheetah printed jacket,which just so happens to be the predator in the first cut scene we see. Thus,presenting the presentation of humans can choose to be the hunted or thehunter. After the bag of designed drugs bursts streaming throughout her system,we get a glimpse of her potential ‘power’, as she adjusts into an assassin,using (what woman hold over the heads of men,) sex appeal. Touching base on a societal stance, Basson brings in Professor Norman (Morgan Freeman), the modernman as a helping hand (since women seemingly can’t be held accountable for theirown actions) to tell her the ‘what now’. He informs her, “if you’re asking mewhat to do with all this knowledge you’re accumulating, I say, pass it on… just like any simple cell, going through time,” (cue the sex scene?)

This scene subsequently pilots the plot to Parisian cop (Amr Waked) who sticks around for the rest of the storyline, assisting (the one woman assassin squad) Lucy, to attain the remnants of the dispensed drug. She claims she requires him handy as a ‘reminder’ of her humanity (and the should-be-sexual relationship shared between male and female) with anaggressive open-eyed agenda smooch (the way in which a male character might kiss his counterpart). The subtly of the statement suggests the stereo typical role of the male and the female species in a relationship but swapped. What we see during some of the last scenes, Lucy (the blonde) handingover the key to knowledge to Professor Norman (the supposed-to-be smart one)suggests again, the swap of potential power. Besson breaks down the societalsystem of standards we, as human beings, use to supply meaning to our mere existence by the continual battle between sexes, society’s class system and the measurable amount we transfer into time.

Lucy’s statement, “It’s funny, I used to be so concernedwith who I was and what I wanted to be, and now that I have access to thefurthest reaches of my brain, I see things clearly and realize that what makesus ‘us’ – it’s primitive. They’re all obstacles,” resurfaces the meaning behindthe motion picture, (not about the bang bangs or the Big Bang) humans are, therevolution. We have, (with or without CPH4) the potential power to changecircumstance.

One of the last scenes we see is of Lucy meeting Lucy, (our ancestor ape) and Lucy’s voiceover, “life was given to us a billion years ago,now you know what to do with it,” which leads us back to the beginning with the what ifs and the conundrum of curiosity. Which was the movie’s main aim allalong, provide us moviegoers with plausible potential, what will you do nowwith the key to knowledge?

So back to the Scarecrow’s song, “if I only had a brain,”Luc Besson’s ‘Lucy’ gets a go at moviegoers who were watching just for the thrill of a sci-fi thriller (which there’s nothing wrong with). Evidently,common criticism voiced among the disappointed movie viewers missed the‘science’ part of the fictional plot. After all, what good is a movie that makes you want to think? Take out the subtle subplot; add in the action and the blonde bombshell ass kicker, ‘Lucy’ was still, well worth the watch, unlike mod tmovies sharing in on the same plot.