2015 Oscars A Platform For Outspoken Stances 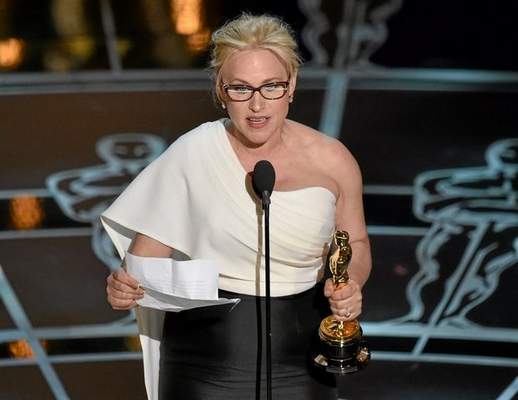 The most highly anticipated event in show biz took place on Feb. 22—the Oscars. This year marked the 87th annual celebration. Millions of people tune in to this annual celebration every year. From the red carpet to the extravagant dresses to the controversial performances, the Oscars never cease to entertain.

The opening segment was mindfully and creatively crafted. After addressing the issue of a seemingly scarce amount of African-American nominees and a few other audacious jokes, a musical number performed by Neil Patrick Harris with the help of Anna Kendrick and Jack Black possessed traditional theatre qualities composed of humor, song and dance. Artistic lighting also played a major component. The theme of the opening segment was devoted to the magic of movies and Hollywood. A montage honored some of the most memorable moments in film history.

The Academy Awards, rebranded as “The Oscars” in 2013, have recognized the most prolific works in the film industry each year since they were first introduced in 1929. The iconic award, famously depicting a knight with a crusader sword, is considered to be the highest achievement in the film industry and is awarded to every contributing aspect of the coveted art form. Some of the most popular categories include: Best Picture, Best Cinematography and Best Actor in a Leading role; as the ceremony has grown older, more categories have been added such as: Best Makeup and Hairstyling and Best Animated Film—the academy has done well to pay homage to different aspects of film as technology continues to improve.

The 2015 Oscars ceremony confusingly commemorated films made in 2014. Of all the silver screen triumphs released in 2014, the Oscars promised to be one of the most unpredictable and controversial ceremonies to date. With uncertain outcomes came un-foretold upsets. “American Sniper” though thought to clean up, shockingly only won one award…for Best Sound Editing, surprisingly revoking what many thought would lead to Bradley Cooper’s award for Best Actor in a Leading Role, Clint Eastwood’s Best Director and the award for Best Picture. Even though the film of the heroic Navy SEAL Chris Kyle annihilated box office sales of all of the other nominees in the Best Picture category combined, its defeat was apparently imminent.

Best Picture was awarded to Alejandro González Iñárritu for his film “Birdman: or (The Unexpected Virtue of Ignorance)”, the story of struggling actor Riggan Thomas, portrayed by Michael Keaton, who strives to rekindle his career without dependence on a past role, Birdman, that mentally haunts him, despite the success the role brought him earlier in his career. Aside from American Sniper the film beat out Boyhood, The Grand Budapest Hotel, Selma, The Imitation Game, Whiplash and The Theory of Everything.

Birdman also went on to win awards for Writing, Directing and Cinematography, perhaps replacing the role of the projected American Sniper.

Best Actor in a Leading Role was presented to Eddie Redmayne for his performance in The Theory of Everything, the touching true story of genius Stephen Hawking, a cosmologist who has endured a lifetime of suffering due to his amyotrophic lateral sclerosis, or more commonly referred to as ALS or Lou Gehrig’s disease. Hawking himself praised the performance of Redmayne via Facebook; he also admired the film Interstellar which won an award for its Visual Effects.

Other notable winners include: Julianne Moore, who won Best Actress in a Leading Role for her performance in Still Alice, the story of Dr. Alice Howland as she copes with Alzheimer’s disease as originally depicted in the novel written by Lisa Genova. J.K. Simmons won for Best Supporting Actor for his work in Whiplash, which tells the humbling story of an aspiring jazz musician who conquers adversity and an abusive instructor to eventually prevail. Patricia Arquette won Best Supporting Actress for her role in Boyhood—another great film that arguably should have won Best Picture—the film unprecedentedly and ambitiously used the same cast over a 12-year span.

Arquette’s acceptance speech was one of the most memorable moments of the event as she spoke of women equality, as some such as Meryl Streep embraced her speech, she later received backlash and was criticized for her outlandish reaction.

Of all of the shocking results at the Oscars, nothing seemed to be as shocking as Lady Gaga’s outfit, aside from her four-song medley performance that paid tribute to The Sound of Music which was arguably the highlight of the night. The performance concluded with Julie Andrews greeting Gaga on stage, it was a great moment for television and for the entertainment industry.

There was only one other performance that gave Gaga a run for her money. That would be the performance by John Legend and Common of the song Glory which won Best Music (Original Song). The song was written by John Stephens and Lonnie Lynn and was featured in the film Selma. The performance brought some of the most iconic actors in Hollywood to tears. The live rendition of the song was irrefutably the most touching and moving moment of the ceremony.

There were many firsts in the 2015 Oscar ceremony; for one, it was one of the most controversial events ever held. The outspoken stars addressed race and gender on several instances throughout the event, some may have been offended, some may have laughed but regardless of the reactions it seemed to be a motif throughout the duration of the celebration. Though some may have cringed for whatever reason, it made for good television. Perhaps such peculiar speeches, whether they are complete flops or inspiring words of wisdom, are needed for one to even get through the grueling four-hour ceremony. The spontaneity of the event is why we watch the Oscars, the unpredictable nature of the event gives us closure, and is why we will all reflect on this year’s ceremony and tune in for next year’s.