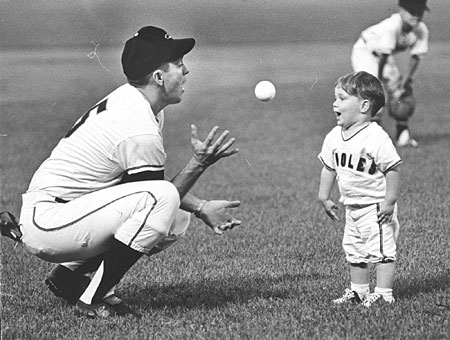 The church pungently reeks of oak as the aromas of the pews pierce my nostrils. Vibrant shadows illuminate the altar as the sun explodes through the stain glass windows. Bells ring ominously, echoing through the hollow steeple. I approach my father’s casket, unable to fathom our last moment together.

Beneath the opaque and sorrowful sky I placed a lone rose to gracefully kiss the ground in which he would lie eternally. Dozens of black trench coats and umbrellas periodically fled amidst the fog and eventually digested them. After the funeral, I ventured to my father’s house, remembering the way as I encountered the roads we once traveled together.

When I arrived to his house, I noticed the overgrown grass as it screamed for a grooming.  A small stack of newspapers compiled at the end of the driveway, still wrapped in the translucent blue plastic. I walked down the dissipating cobblestone escorted by the eerie sound of the picket gate as it stubbornly whistled, refusing to shut. An unsettling chill erected the hair on the back of my neck as I opened the front door.

The cobweb covered curtains fluttered in the breeze coming from the back window that had been left open. I cautiously opened the refrigerator door, only to find a gallon of water and a couple of beers. I entered my father’s bedroom; the chipped paint on the ceiling began to accumulate into piles on the cold floor. Inquisitively, I began to look through my father’s desk, opening each drawer, not knowing what I was looking for or what I would find. In the first drawer I found a collection of old pictures, the first was of my father as a child, another picture was of my grandmother who died giving birth to my father. There were pictures of my father and his father; playing catch, sharing their passion for baseball that was later passed to me.

Compelled to uncover more, I continued to look through the pictures, each of them telling me a story. At the bottom of the drawer I found a peculiar key, a skeleton key. It was heavy and ornate; its original glimmer had tarnished, as did the red silk ribbon that ran through the bow of the key. I looked around for what the key could possibly open and became determined to find out. I looked through the desk, I looked through the closet, I looked through his bureau and I looked through his nightstand; infected and obsessed with the possibilities of what the key could open. As I was about to exit the bedroom and head to the attic, I noticed a portion of the satin bed skirt was pushed between the mattress and the box spring. Intrigued, I flipped over the mattress and found it, the mahogany chest.

The chest resembled a briefcase, I knew it was old; its patina glistened as it reflected off the mosaic lid. The keyhole was scratched and partially dented, abused over the years. I felt a wave of adrenaline wash over me as I inserted the key and turned it. I opened the delicate lid before a solemn tear flooded my eye. As I blinked, the tear dropped and splashed upon what I found to be my first baseball glove as it rested on top of my father’s. Instantly, I was transported as I found myself waiting for my father to come home from work, praying for enough sunlight to have a catch, but seemingly always threatened by the dreaded sunset. Sunday mornings I would wake up and grab the gloves, forcing my father to put down the newspaper. The tree in the backyard had a bulging root that became my pitching mound, I would go through my windup and my father would call balls and strikes. The seventh inning stretch entailed my mother calling us in for an early dinner. Afterwards, my father and I would resume our game and he would announce my name as if I were on the Yankees, coming in to pitch in the bottom of the ninth inning in the last game of the World Series.

As I got older, I grew out of my pitching mound; it wasn’t big enough, it was too close to the fence my father protected from the wild pitches I once threw as a kid. A hole gaped between the root and the ground making it impractical and less appealing. As I grew up I lost my urgency to have a catch with dad, burdened with “real life” and work. Although I didn’t become the All-Star my father encouraged me to be, baseball enriched our relationship throughout his life. Baseball is an essential bond for fathers and sons as it was between my father and his father, my father and me, and how it will be between my son and me.