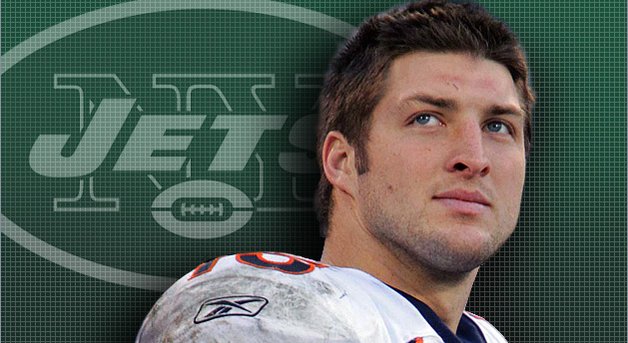 The Jets had a well documented locker room issue that ultimately resulted in their demise last season. Ladanian Tomlinson spoke about it openly. It’s a fact.
They also have a quarterback with a lower self esteem than a teenage girl, which was a contributing factor in their less than dogged pursuit of Peyton Manning.

Then they did this.

They gave up a fourth rounder, swapped a 6 for a 7, and cash, for a quarterback killer who is every bit a quarterback as Stephen Hawking is a gymnast.

This is nothing new, Tim Tebow is not a quarterback. Tim Tebow cannot throw the football. The only conversions Tim Tebow can make are religious ones. And yet, he is the man who cost Kyle Orton his starting job. He is the most polarizing man in sports and he is backed by an army, nay, a congregation ready to kill to get their hero in the limelight.

How great is THAT if you’re Mark Sanchez? 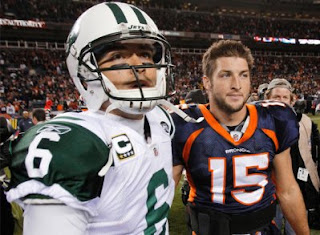 Realistically, from a football perspective, Tebow’s contributions will be out of the wildcat formation (figure that’ll average around 5-6 snaps a game). Sanchez, already suffering from a season in which his total QBR was one of the 5 worst in the NFL, is now joined by the man who finished dead last. Worse yet, the Jets signed Drew Stanton earlier in the week so that there are now 4 “QB’s” on the roster. 4 “QB’s” on the payroll. It was never a secret that Peyton was considering Denver, are the Jets really that nearsighted? Was the demand for Drew Stanton really that high? Better still, Mark Sanchez was just pacified for the Jets “courting” of Peyton by being rewarded with a contract extension. He was handed both job security and a vote of confidence from the front office before Jets brass decided they just NEEDED to have the savior. What message does that send to Sanchez? This isn’t the greatest quarterback of all time they got into a bidding war with Jacksonville over, this is the single worst throwing quarterback in the league.

And to dispel the notion that Tebow was hired to fix the clubhouse chemistry issues, we need to get a few things clear. Tebow is getting paid solely to run the Wildcat (a job Russel Wilson could have done with a 5th or 6th round pick), creating instant quarterback controversy with an already shaky QB, and adding to the payroll. He is a second string (arguably third string) quarterback and an instant media circus. He has even fewer NFL credentials to fall back on than does Sanchez. The idea that a virtually useless backup will change the atmosphere in the locker room, particularly one with egos and personalities like Ryan, Bart Scott, and Santonio Holmes, is laughable.

The only upsides to the Jets latest “publicity stunt” as Joe Namath calls it are the following:

1) Hearing Tim Tebow and Antonio Cromartie having a candid conversation
2) People can stop talking about how bad the Jets’ Brett Favre signing was
3) Tim Tebow/Rex Ryan
4) Jeremy Lin has a new bible studies partner
5) The Jets and the Tebow circus on Hard Knocks (please?)
6) More Tebow on SNL

In all seriousness, there is not a single angle from which this move doesn’t scream desperate publicity stunt. His football contributions figure to be minimal (at least Jets fans better hope they are), his locker room presence will be close to non-existent because of the aforementioned limited on-field contributions, and he can only rattle an already shaky QB who the Jets are relying on to evolve this season (y’know, because of their shoddy O-line, AWOL running game, lack of receiving threats, invisible pass rush, and aged/overrated linebackers). The Jets accomplished their goal of stealing the back page, problem is, they did it in March whereas the big brother crosstown did it in February.