Why Holiday Shopping is The Best Birth Control Ever 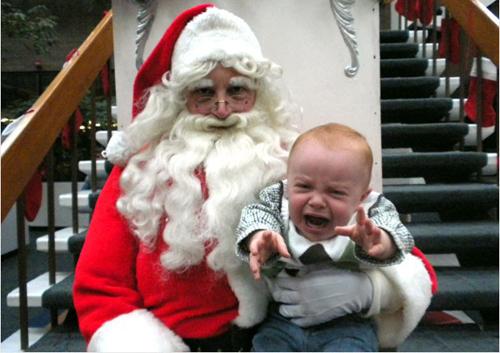 After being pulled from my turkey coma I finally found myself at the mall the weekend after Thanksgiving to begin my holiday shopping. What I found was not just great bargains but a reason to never reproduce.

I will highlight three very real and true stories from this one shopping trip to explain why it lead to my ovaries tying themselves in a knot.

First we ventured to look for the Toys for Tots table to donate two toys as we have done every year for as long as I can remember. This means venturing near the Santa Land booth with all the little kiddies waiting to see Santa. Wonderful! We found the usual scene parents trying to cajole their children to wait patiently and the echoing wails of the child who was currently visiting the Big Guy in Red. As a headache began to take hold a little demon was darting straight at us and ran right into my sister nearly knocking her flat on her ass. This was then accompanied by the parent of said demon staring at my sister and me as if we had wronged his child in some way by merely existing. Okay one kid is not enough to make a person completely give up on the idea of children so onto the next misadventure.

Since my sister and I firmly believe in the one for you and one for me policy of purchasing gifts we then ventured into an Old Navy. As we all know Old Navy has a variety of thing besides clothes such as toys. Not just toys but specifically balls. There were two children playing with one such ball while their parents waited on the mile long line that accompanies extended Black Friday sales. They darted back and forth between stand and racks before losing the ball. By losing the ball I mean it was airborne and hit some woman in the head. They laughed and pointed and then fled. Their mother left the line to find them. Nobody apologized to the poor woman they had concussed.

We left the Old Navy not having purchased a thing because the sweater we were looking for was stuck on the wall and nobody was willing to help us get it down. Downhearted we move onto the next store Victoria’s Secret Pink store. While we were looking at sweats and sweat shirts the only others in the front of the store were a girl in her mid-teens and her mother with them was a boy of about 11. Now to properly explain what had horrified me into never wanting children I must set the scene. For those of you who are unaware of how a Victoria’s Secret is set up and a refresher for those who do. There are little islands that are in the center of the store that also act as tables and storage. These little islands hold underwear divided by cut. Now while my sister was searching for something that wasn’t an extra small on the shelves I turned my head and then I saw it. The boy was elbow deep in the little island and he was sniffing. Let me write that again. He was sniffing the panties. I grabbed my sister and we left the store while the little sniffer was still doing his thing.

Now for all the shouting, pushing and frankly disturbing things I witnessed you will forgive me if I don’t help with population push. Happy Holidays!