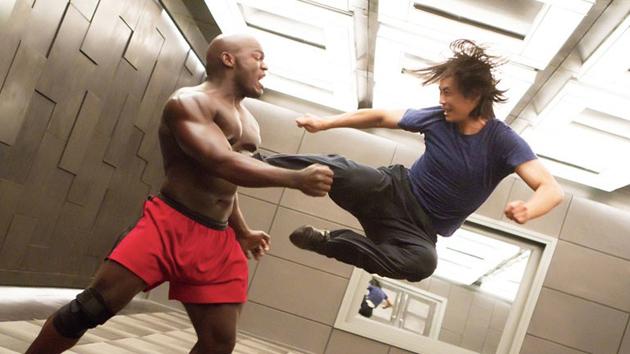 Star Hu Chen duking it out in Man of Tai Chi

A young martial artist’s unparalleled Tai Chi skills land him in a highly lucrative underworld fight club. This is Rumor Control, here are the facts!

Keanu Reeves has been mostly quiet since The Day the Earth Stood Still remake, hasn’t he?  In that time he’s only done a small handful of independent films and recently his first foray into the mainstream with his flop 47 Ronin. But this year there was another film that Reeves not only starred in but was also his directorial debut, the martial arts film Man of Tai Chi, a film that has actually garnered praise from Hong Kong cinema legend John Woo. So is Reeves’ directorial debut worth the praise, or should Reeves acknowledge that he doesn’t know kung fu?

The story for Man of Tai Chi is quite good. The story follows Tiger Chen, a young man learning Tai Chi and using it to fight in a tournament rather than for meditation. However, his skill catches the attention of private security owner Donaka Mark, who runs an underground fight club. He hires Tiger, who only agrees since the temple where he trains is under threat of being torn down. Tough simplistic at first the story begins to develop in a clever way. Over the course of the fights, Tiger begins to love the violence and the pain more and more, becoming a dark shadow of his former self. This was Donaka’s plan all along, not to use Tiger for money, not for the pleasure of killing people but because he was an innocent man who he wanted to corrupt and the story develops this idea very well throughout the course of the film. The pacing for the story is good, moving along at a quick enough pace while all the while it laces fight scenes a good distance apart and at appropriate times. Of course there are problems with the story here and there. There’s a subplot between Tiger and a generic love interest that serves goes nowhere and serves no purpose other than to make the threat against the temple more coherent. Later on, Tiger’s method of fighting becomes more and more aggressive and violent, to the point where he really hurts an opponent in the legal tournament he’s a part of and is disqualified for it. This was a good moment of development, showing how far gone Tiger is now, but the way it’s handled is clumsy and downright silly. After severely hurting his opponent, the commentators react in the most amusing way possible, one of which proclaims that Tiger has been possessed by a demon. Being shocked and outraged is one thing, but shouting such random gibberish just feels out of place and unintentionally humorous. Despite it’s problems, the story for Man of Tai Chi is still engaging enough to hold me attention between fight scenes, balancing action with story nicely.

The characters for Man of Tai Chi are pretty good.

Tiger Chen is a simple yet likeable character. There isn’t much to the character save for his naïve innocence to start and more violent nature down the road. Despite his simplicity, I still had an emotional connection to the character due to his sympathetic nature. He’s a man who is led astray by money and power and when he realizes the monster he becomes, he snaps out of it and returns to his once good state. What I especially like about the character is Reeves’ simple but effective use of mise-en-scene with the character. When Tiger is first introduced, he wears a white uniform when practicing and fighting, however as he becomes more and more violent, he begins to wear darker clothes until finally when fighting his master he is garbed in a black shirt and black pants, using a visual aid to show the development of the character.

Donaka is a pretty cool villain, though a strange and silly one at that. His plan to corrupt Tiger is good and his motivations are simplistic but reasonable but the character does some of the oddest things. For some reason, he’ll don a disguise to kill someone, an oddity since he already runs a fight to the death fight club so concealing his own murders seems illogical. What isn’t strange about the character is the small amount of focus on him. Donaka will only come in every so often for a very limited amount of time before taking up a good amount of time in the end.

Acting for Man of Tai Chi is good.

Hu Chen does a good job as Tiger Chen. He transitions between speaking English and Chinese and in both cases he does a fine job. He also does splendid work in his fight scenes, a majority of which had me thoroughly entertained.

Keanu Reeves gives an unintentionally humorous performance. For so much of the film, he utilizes that monotone style of acting he’s adopted over the years where he seems disinterested and mostly asleep. But there were also moments where he was also lively but over acted. In one scene after watching a fight, he makes some odd attempt to roar. What was the point? What was the purpose? I don’t know I was too busy laughing. In another scene, he’s getting pummeled spurs his opponent on to hit him more. In both cases Reeves was still entertaining, his monotone acting is just silly and his more bizarre moments were hilarious.

Lastly we have the action scenes for Man of Tai Chi. The action starts off fantastic, having great fight choreography, cinematography and editing. We get to see the whole fight, blow by blow, in good clarity and the choreography is well made, being energetic, having that feeling of impact and realism and every so often I was so amazed, so astounded by what I saw that I had to cry out in surprise and joy. For a majority of the film the fight scenes are great, but sadly by the third act they completely fold and crumble with the final two fights. The first of these disappointing battles is actually one I thought would be great. Tiger Chen has to fight an Indonesian martial artist and who should it be but Iko Uwais, star of The Raid and an excellent martial artist to boot. I was expecting to see a great fight but was sadly met with a two minute game of tag between the actors. This moment soon turned from disappointing to confusing for me. I understand why there was no fight since it was a pivotal moment in Tiger’s development but why hire Uwais and have him do nothing? It only got worse from here. The final fight was between Tiger and Donaka, a poor way to end an entertaining film. The fight heavily utilized wire work, something I despise and a technique scarcely used in this film until this fight. During the fight it is evident that Keanu Reeves most assuredly doesn’t know kung fu since his fighting was poor. What’s worse is that Hu Chen is forced to hold himself back all to make Reeves look like a formidable adversary. This wouldn’t be too bad if it wasn’t so blatantly obvious and that generosity that Reeves had now turns into narcissism, making himself seem far greater then he really is. Overall the fight scenes for the first two acts are spectacular, but sadly everything is downhill in the third, though thankfully the story still holds up and kept me going till the end.

Final Thoughts: Despite some problems with the story and disappointing final fights, Man of Tai Chi is overall an entertaining film. The story is mostly good and can be quite clever having, Reeves does a good job of directing for the most part, the characters are likeable, the acting is good and the fights for the first two acts are great. In the end Man of Tai Chis is an entertaining martial arts film that blends story and action nicely and is a good start for Reeves’ directorial career.

That was Rumor Control and those were the facts!