In popular culture recently many successful TV shows have had a psychopath as the main character. The Following, Hannibal and especially Dexter, but what makes these shows so entertaining to watch and why are we interested in them so much? First of all we have to understand what is a psychopath? Many people all over the world and from different societies show psychopathic tendencies and it’s difficult to narrow down and define what constitutes someone to be specifically classified as a psychopath.

Psychopaths generally have no regard for others and have a huge sense of grandiose self worth. They will do anything within their power to get what they want and will try to destroy anyone who gets in their way. People are drawn in by their charm and high charisma and they use this to their advantage because having people drawn to them helps them to get what they want. The manipulative mind of a psychopath is very complex and hard to understand, as many of them don’t actually realize they are due to their high sense of narcissism.

People have always been interested in the minds of psychopaths and this is one of the main reasons they are portrayed often in movies. Actors love to have the opportunity to show off their skills because rather than playing a character, they are portraying a complete idea of the characters mind and they have to lose themselves into the role and understand how the psychopath feels without empathy, compassion and remorse. So the psychological factor behind all of this is why are we drawn to them? Most of us have morals and ethics and care for others, the complete reverse of this is shown in psychopaths and motivates them to do certain things and that is what the regular members of the public are most interested in. We want to know why this certain person lacks human emotion and what drives them to do the things they do.

One of the most famous movie psychopaths is the Joker from Batman: The Dark Knight. He is always mentioned in lists when it comes to best villain and scariest characters, but why? He wears clown make-up and is just a regular human being? What is most intimidating about the Joker is that he is a complete psychopath. He doesn’t care about anything and as Michael Caine put it in the movie “just wants to watch the world burn”. You can’t reason with someone who wants nothing but pain and suffering for others, you can’t control someone who will stop at nothing to cause trauma to everyone around him and you can’t save someone who fears nothing.

Another movie psychopath is Jigsaw from the Saw movies. He is different from the Joker because he has a motive behind what he does, but he is also terrifying because he (like the Joker) has nothing to lose. Jigsaw is a former civil engineer dying from an inoperable frontal lobe tumor that had developed from colon cancer. After a failed suicide attempt, he experienced a new respect for his own life and set out to force others through deadly trials to help them appreciate their own lives by testing their will to live through self-sacrifice. The tests were typically symbolic of what Jigsaw perceived as a flaw in each person’s moral character or life. So Jigsaw didn’t technically kill these people, he captured them and forced them into ‘games’ to find out if they had to will to survive. Do you think this makes him a psychopath? 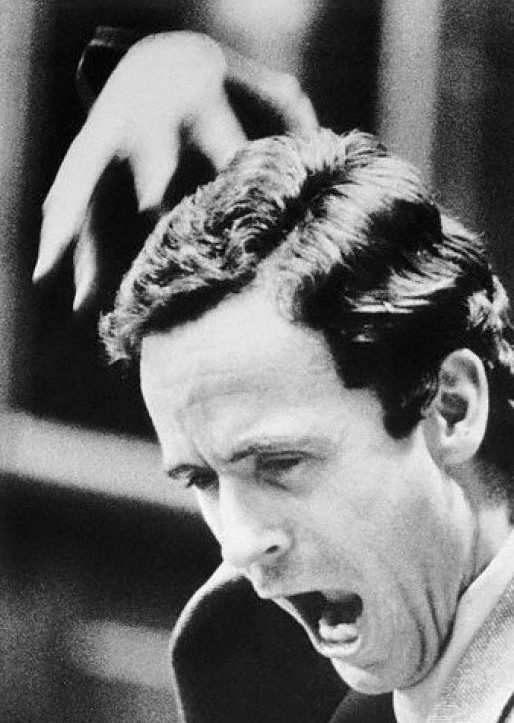 From the fictional psycho to the real deal. Serial Killers. Ted Bundy is often epitomized as the original perfect serial killer, his good looks, charm and intelligence led to him becoming a very efficient and powerful serial killer in the 70’s. Bundy was a very charismatic person but had an unusual upbringing, he was brought up with the belief that his grandparents were actually his parents and that his mother was his sister. During the 40’s in America it was seen as social stigma to have an illegitimate child as his mother had an affair with an unknown military officer and became pregnant. Bundy was very cunning when it came to his murders, he would normally feign injury to get girls to help him carry things to his car when he would bludgeon them with a crowbar, drive them into the woods and rape them. Evidence shows that Bundy beheaded at least 12 of his victims with a hacksaw and would often keep the heads in his apartment as a trophy. It’s hard to say wether or not some of the characteristics of Bundy psychotic mind were traits of a psychopath or of other deeper neurological problems. Bundy admitted to killing at least 38 girls but detectives believe it could be anywhere between 50-100, which shows the complete picture to how much of an efficient killer he was.

It is said that 1 in every 100 people are a psychopath and there is a test that you can take to see how many of the official traits of a psychopath you may have. Many people have a few of the traits but at the top of the list are the serial killers, fraudsters, bankers and many CEO’s even fit the criteria of a psychopath. In a capitalistic society, more and more people are developing sociopathic and psychopathic qualities as it helps them get ahead in life and leads to the be able to achieve everything they want. People are interested in psychopaths because they want to know if they are one too, everyone has the thoughts and impulses but it takes a true psychopath to act on them.