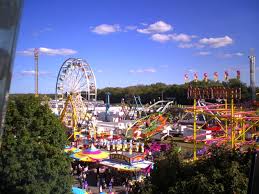 Fall is my favorite season by far. If I could list all of the things I love about fall it would take up this entire page, and to be completely honest I don’t know if I want to type all of that right now, and I’m sure you wouldn’t want to read it either. However, the last few weekends of summer are my favorites. The crisp air, changing leaves, the smells of fires, sweaters and pumpkins are only some of the things at the top of my “favorites of fall list.” What’s number one though? That’s easy, fairs.

On September 20th, I went to one of my favorite fairs called The Big E, also known as the Eastern States Exposition. When I mention it here in New York, so many people ask me what it is because they have never heard of it before. I guess it’s a New England thing. The short version of what The Big E is, is it’s the largest fair in the Northeast, also known as a New England extravaganza.

Some of the things that this fair has, and I will talk more about later, are things like exhibits, rides, shopping, crafts, a daily parade, a Mardi Gras parade, foods from around the world and some of the biggest names in entertainment. The Avenue of States is one of my favorite parts of the fair, but overall just the feeling of the fair is amazing.

This was the first time for me going to The Big E without my parents or grandparents, and I realize now what my parents had to deal with. I was watching families walk around and I could see parents getting annoyed with their kids. I’m sorry mom if I ever annoyed you to no end. I passed one family and I heard the mom say, “This is the last thing you’re getting and I’m serious John.” I began to have flash backs to when I was a kid and my mom telling me that I couldn’t have anything else.

Flashbacks were a common thing for me almost the entire day, and one thing that made me have these flashbacks the most was the food. The food! I don’t even know if I have words for some of the food that was there! The Big E is home to some of the craziest foods such as the Craz-E Burger, which is a cheese burger with bacon but instead of bread, they use a glazed donut. I’m not going to lie to you, I tried it, and it’s not something I would eat more than once in my entire life. It’s not horrible, but it may or may not have caused some weird feelings in my stomach. Not horrible, but funny feelings. 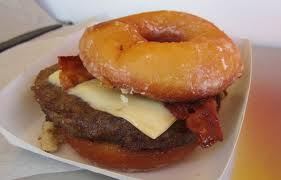 Most things at The Big E are fried, and they are some of the weirdest fried foods I have ever heard of. For instance, fried cool-aid. Ask me how they made it. I wouldn’t be able to tell you! But you would see people walking around with it and it looked just like colored fried dough.

Amongst fried cool-aid, some other foods that were at the top of the “must eat” list were red velvet oreos, s’mores on a stick, deep fried nutella and banana sandwiches, fried butter and fried jelly beans. Yes, you read all of these things the right way. And if you wanted something sweet, the best place to go was the New England Center. It is apparently an unwritten rule that at some point you go there and get either a cream puff or the Big Éclair.

Not everyone goes for the fried foods or even the super sweet things, there is actual food too. One of my favorite things being the baked potatoes. Of course there is more around than just baked potatoes but, I personally can’t go to The Big E and not get a steaming hot baked potato with butter, cheese, sour cream, bacon bits and chives piled on top to make the most beautiful combination of colors you can see in a bowl.

And food isn’t the only reason people go to the Big E, but it just happens to be a major part of the fair. There are vendors everywhere who sell such a variety of things from handmade ceramics to “As Seen on TV” products.

If you are looking for something to do in the last couple weekends of summer, and if you like fairs, I highly recommend taking the trip to Massachusetts. Food, people, vendors, animals, it’s all completely worth the trip, and most of the time, the traffic.