Don’t be That Guy 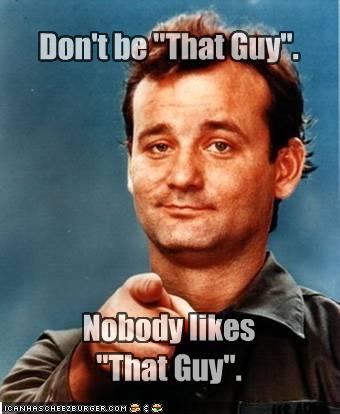 Everybody knows him, it’s “that guy” and his annoying antics. I’ve compiled a list of things not to do if you want to avoid being “that guy”. Every one ends up being that guy one time in their life. That one jerk moment that you wish nobody saw or paid attention to. That guy is not limited to men, there are times when “that guy” is also “that girl” but for simplicity we will continue with…that guy.

1.   The “drives too fast in a parking lot guy”
-Nobody likes this guy, while you’re trying to be careful and look for a parking spot here comes that guy. The one that zooms past you and turns your Toyota corolla into a tomb of frustration littered with the air of profanity. Just slow down, a parking lot is not a speed way, there are kids and people walking amongst these idle vehicles. Save the speeding for the road!
2. The “Asks a long winded question, during the last 5 minutes of class guy”
– You know this guy well, that day when you’re really trying to catch a train, bus and you feel that pivotal moment when your professors speech states to taper off and you say to yourself “YES! He’s almost done, I’m home free”! Nope, because that guy in the back who wasn’t paying attention during the whole lecture asked a question which the professor is going to need a good 15 minutes to answer. This guy is the worst type of guy, he had his phone out during the class.
3.   The “Texts in the front row so much during lecture, professor puts a ban on cell phones guy”
-The classic move, the “I want my professor to think I’m smart so I’ll sit in the front row and they won’t notice I’m not even paying attention.’ This does not work, professors are not idiots, they know when you’re just nodding in approval saying to yourself “If I keep smiling and nodding, maybe they will go away.” The texting in the front row annoys professors to no end where many have banned cell phones from even being out on the desk. If you think your professor is just being unrealistic with their cell phone policy don’t blame them. Blame that guy!
4.   The “I hate my college GUY”
-Seriously this guy just needs to stop. If you hate your school so much you can leave, transferring is easy don’t be miserable and just make other people around you miserable. We don’t want to hear it and although school spirit isn’t exactly high around Mercy College there are still some of us who take pride in our school. What this guy needs to understand is that college is what you make of it, no matter where you go. This guy is also related to the wear a hoodie branding another college guy, hey buddy you’re not even in the same state as Harvard so just stop it okay?
5.   The “Doesn’t do a damn thing in the group project guy”
-He/She is the reason why we all hate doing group projects. Aside from the fact that being forced to socialize is incredibly awkward, but there is always that guy in the group who doesn’t pull his weight and depends on everyone else to pick up the slack. Especially if you have one of those professors who will grade the group and not the individuals. Be an adult, do your work, teamwork is a part of life so just get used to it.
6. The “Dresses inappropriately guy”
-People should be able to wear anything they want, however you should at least dress for the occasion. You cannot wear a hoodie to a job interview, however if suits aren’t your thing you can easily find something casual and appropriate.  Just Google your two favorite words “Business Casual”.

You see that? I just saved you from being that guy. You can leave your thanks in the comments below!