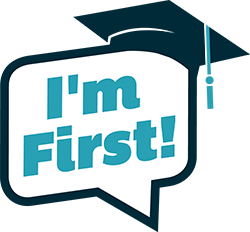 There are many notable accomplishments that one experiences throughout his or her life and receiving a college education is prominently one of them.

While attending college may seem more common today than say four decades ago,  it is something that many students wear proudly across their chest, like a golden satchel.

Statistics state that about 30 percent of American college freshmen are first-generation students, and nearly a quarter of those students, almost five million, also come from low income families. Success is usually not guaranteed or even expected, for nearly 90 percent of those who fall into that low-income first-generation distinction will never earn a degree, and nearly 25 percent quit after the first year.

While there is no universal definition for first-generation college students, or FCGS,  the most accurate one would be the first person in the immediate family to attend college. However, there are a number of institutions that define first-generation college students as those whose parents have never earned a four-year undergraduate degree, which then qualifies students whose parents may have attended college, but did not complete their degree study.

Although being the first in the family to attend college is both inspiring and exhilarating, there are challenges that these valiant students face, making it difficult to attain their degrees. The dropout rate of first generation students from low income families is four times higher than that of second generation families from average to high income families. 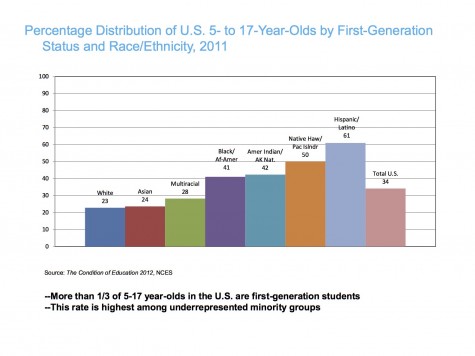 Cultural conflict happens to play a small part in the struggles of first-generation college students. With Hispanics and Latinos making up the majority of FGCS, according to the College Board, FGCS find it difficult to relate issues to their parents not only because the parents have not attended college themselves, but in some cases they aren’t able to seek help due to language barriers.

Meet Danlly Ramirez. Danlly is a 17 year-old freshman majoring in biology at Mercy College. Danlly admits that the most difficult challenge for her is not being able to talk to her mother about her challenges, not only because she has never attended college, but because the material is all in English, making it impossible for her mother to understand. As the oldest of three, Danlly has two younger brothers who watch her every move, which is what initially made her decide to enroll in college in the first place.

“It was my only option. I’m the first born and my mom pushed me. ‘You need to go. You have to,’ she would say. And I prefer earning an education than to get and being bossed around so young,” she said.

As her first semester came to an end, Danlly reflected on the difference between high school and college. “In high school, if you turned work in late no one cared, but in college, everything has to be done at what feels like the same time,” she says, adding, “There’s always going to be something that’s hard, but I always try my best to accomplish it and do well.”

Meet Estrellita Sosa, a psychology major who is in her final year at Mercy College. Estrellita has always dreamed of getting a better education than her parents. As the youngest of five, despite the lack of motivation surrounding her, Estrellita reminds herself why a college degree is so important.

She explained, “I like to spend and buy things that I know I deserve, and I can’t do that by working in a retail store or a bodega all my life.”

Financial constraints and limited college knowledge were also components that made college a difficult journey, as it does for many other first-generation college students, according to report from the Office of Undergraduate Retention and FGCS Committee. Like Danlly, Estrellita’s family speaks mostly Spanish, so when it came to filling out college applications and financial-aid paper work, Estrellita had to struggle through it all the best she could. Estrellita also admits that the small high school she attended offered very little to no help, and the help they did offer included high persuasion of applying to CUNY schools. Coincidentally, College Board reports that FGCS tend to apply and attend less selective colleges that are closer to home.

Estrellita feels so strongly about receiving a college education that she doesn’t understand anyone who wouldn’t give it a try.

She says, “College is an investment in your future and gives you a better opportunity than the person who only graduated from high school.”

Despite the odds that may have played against her, Estrellita is anxious to walk the stage in May at her commencement ceremony as the first in her family to receive an undergraduate degree.

“It’s going to be very rewarding for sure. I’m doing it, I did it,” she said with excitement. Though it isn’t always the case, it is recognized that first generation college students tend to come from low-income families. For this reason alone, first generation college students usually have to balance both school and work to be able to afford school along with personal living conditions.

Rashaan Pace, a senior at Mercy College, is terrified to graduate this May, yet he is hopeful that he will find a job in a field that he is extremely passionate about. After majoring in history at Concordia, Rashaan took a year and a half off to work and then enrolled in Mercy College as a film major, something that he enjoys doing regardless of the extreme competitiveness for employment.

With 1o siblings all looking up to him, Rashaan feels the pressure during his senior year, and yet he still finds joy knowing that in 12 weeks he will graduate.

“It’s an honor to have my parents still support me and want to see all my dreams come true,” Rashaan voiced.

Although Rashaan has been able to rely mostly on financial aid and the financial support of his family to get him through college, he does recognize the challenges that his peers face that may hold them back from graduating or even attending college in the first place.

“Many of my peers didn’t graduate college or didn’t go because they did not have the means to be able to go to school and not work.”

Take myself for example.

I am a senior at Mercy College and the first out of my immediate family to both graduate high school and attend college, which is why this topic is special to me. I wasn’t really sure how to prepare for college, and because I had no one to really help me, when I did apply to college I was denied because my lack of knowledge and preparation showed. I was slightly discouraged, but I didn’t let it stop me – you shouldn’t either.

Once I was accepted to Mercy College, I was informed about HEOP (Higher Education Opportunity Program). HEOP specializes in the financial and academic assistance for students who qualify. As a first-generation student from a low-income household who also struggles academically, I was able to receive financing from HEOP, which has allowed me not only to finish my college career, but also start it. There have been times when I needed advice, or felt as though my peers were more advanced than I was because their parents were college educated and were able to prepare their children more than my parents, but knowing that because I am a first-generation college student and a minority, I am more likely to drop out, motivates me to do my best and not give up.

Like most of my fellow FGCS, I work part-time to be able to pay for bills and support myself. I have friends whose parents have careers because of their degrees and are able to support their children throughout college, and I sometimes envy them because I’m unable to enjoy or participate in college events and activities or have more time to study because of work.

Then there are times I feel as if I need a college education because my future depends on it, and other students are just here because their parents made them attend. While financial constraints seem to be the biggest and most common reason for FGCS not to attend or finish college, it should be the only one. Even then I find that as a poor excuse because there are resources out there that will help you. There are programs such as HEOP, SEEK, EOP, and many others along with sites like www.imfirst.org and www.firstgenerationstudent.com that will assist you.

You may be the first, but you are not alone. The majority of postsecondary institutions consist of a student body that is made mostly of first generation college students; however, the drop-out rate for those students is four times the rate of their peers whose parents have a college education, according to information posted on www.imfirst.org.