Hello To My Heritage 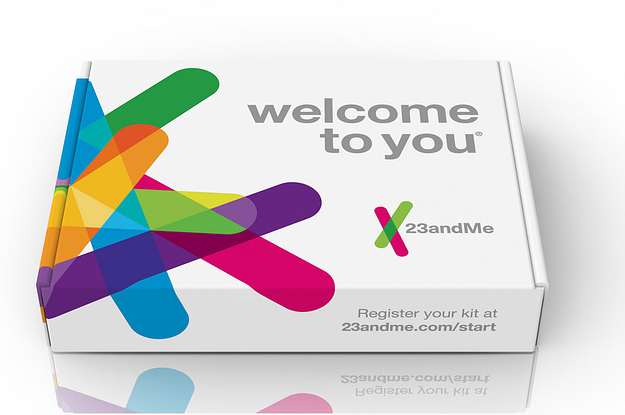 Blonde hair and blue eyes. Three sets of them.

That is all you see if you are looking at a photo of my sisters and I, with three faces that mirror each other almost exactly. Oh, and when we’re sleeping…don’t expect to be able to tell who’s who. However, personalities and styles couldn’t be further from each other. 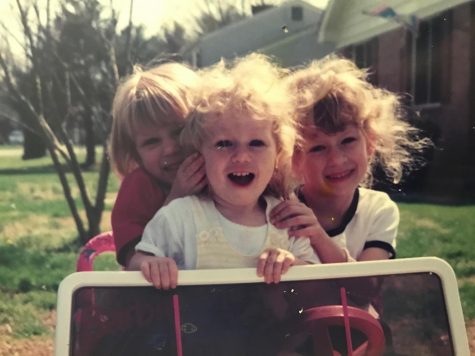 My dad has the same blonde hair and blue eyes, but my mom has brown hair and hazel eyes that sometimes show a little green. As far as I knew my dad is Danish and my mom is Italian, with a blend of a few more geographies. My dad was born in Denmark. I remember being younger and hearing Grandma speak Danish on the phone and thinking, what form of alien language is that?

We always had traditional Italian Sunday dinners with my mom and her parents throughout my childhood. I swore that my grandparents were more than Italian though – I remember my grandma mentioning Polish and Irish through the course of her life.

I concluded my study abroad experience in Northern Europe with my dad, having the opportunity to meet my grandfather for the first time, as well as other members of my family. We took a cruise from Copenhagen, Denmark to Oslo, Norway, on Pearl Seaways, the ship company that my father’s sister works on. Later in the week, we took a train to Sweden, to visit some of my dad’s cousins, my cousins, and Uncle Hans. As a home point, we stayed with my brother’s sister and husband in Næstved, Denmark for the holidays. I ate traditional food, some that I liked and some that I didn’t, but felt ostentatiously proud to tap into my Danish roots.

Then I came back on U.S. soil and thought, “wow, how cool to see my true roots and where my family is really from. I’m Danish and Italian, now I just have to explore my Italian side.” Yet apparently now, I have a ton more places I need to visit.

A few months ago, one of the newspaper staff was reviewing her bucket list. Among the many, and valiant they were, was having an ancestry test done. Then another newspaper staff suggested that we get Mercy to pay for all of us to have it done, and we could turn it into a story for the paper.

But, long story short, we did a raffle at a $5 buy-in for one person to win it. My best friend was sitting next to me, waiting for a ride since her class had ended, so we asked the “third party”to draw a name from the raffle, and lucky me! Also a weird coincidence… but nonetheless I won.

It’s also hilariously funny because right before, I responded to another staff member with something only I would say, exclaiming “who cares about these things and what you actually are, just be yourself that shouldn’t change anything!”

Paid, packaged and shipped, I received the tube of truth the following week and mustered enough saliva to learn the sincerity of my DNA.

“Welcome to you”, the 23andMe box advertised on the front.

There are four different reports included in the package: Your DNA Family, Ancestry Composition, Haplogroups and Neanderthal Ancestry.

The Your DNA Family section uses data from other 23andMe customers who have DNA in common and have opted in to participate in this area of the report.

I have 1,271 DNA relatives in my 23andMe DNA family, 271 which are third to fourth cousins and 1,000 who are fifth to distant cousins. From there, I can see the locations of my DNA relatives, and aspects of their ancestry composition that we share. 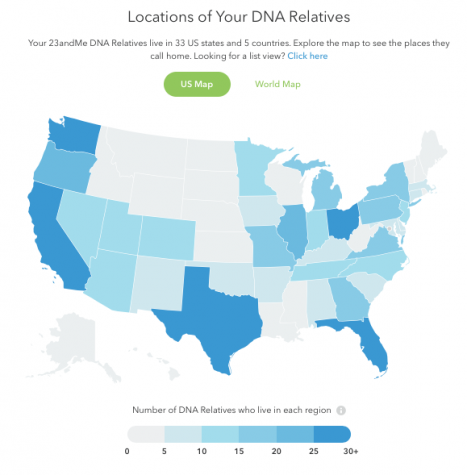 The second report, Haplogroups, represents a family of maternal or paternal lineages that descend from a common ancestor. The global distribution of haplogroups sheds light on the origin of our ancient ancestors and understanding their migration patterns.

The H1 haplogroups is 13,000 years old and is present in regions such as Europe, Near East, Central Asia, Northwestern Africa.

The Neanderthal section of the report tells how much of your ancestry can be dialed back to neanderthals, the ancient humans that bred with modern humans before coming extinct 40,000 years ago.

The final and probably most juiciest section of this whole report, is the Ancestry Composition. Let’s find out how white I really am (not funny). Drum roll please…

Out of the 100.00 percent that is Abigail Smith at a top line view, I am 99.6 percent European, 0.3 percent Middle Eastern and North African, and 0.1 percent Unassigned. See the image below for a more detailed breakdown into who I am, deoxyribonucleically speaking. 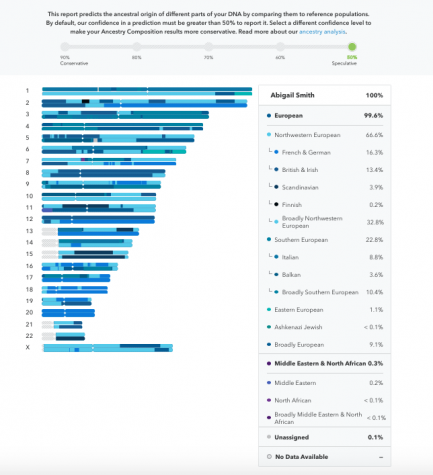 According to 23andMe, “To determine your Ancestry Composition, we use an algorithm that looks at short, non-overlapping segments of your DNA. We compare each segment of your DNA to reference DNA sequences. We have defined 31 ancestry populations from around the world using reference datasets that include over 10,000 individuals with known ancestry. When a segment of your DNA matches the reference DNA from a specific population with a high degree of certainty, the segment is assigned to that population. Sometimes the segment matches reference DNA from several populations, in which case it is assigned to a broad ancestry (e.g. Northwestern European). The results of all of these assignments are then tallied across your genome to determine your Ancestry Composition.”

Since 2010, 23andMe has published 74 papers as their part in revolutionizing genetic research. For example, in March 2017 they published “The role of genetics in male-pattern baldness” in Nature Communications and in January 2017, “New genetic variant found to influence cognitive performance” published in Molecular Psychology in collaboration with Duke University.

23andMe was founded in 2006 and since inception has two million genotyped customers in the world that have discovered and benefited from understanding the human genome. In 2015, 23andMe was approved by the FDA to market the first direct-to-consumer genetic test.

In recent years, genealogy has become quite a hobby to some, and it truly is fun in its purest form. In the 1960s, the Mormon church opened branch genealogical libraries throughout the country. Decades later, many non-Mormon patrons would be using them.

With the internet boom in the ’90s, genealogical information was made more accessible than ever. Online genealogical databases made it possible for Americans to research their family’s ancestry. Ancestry information was democratized because of the way this large information could be organized, reproduced, transferred and received.

Then it becomes a passion, for families.

Conducting this ancestry test was pretty cool, and a really good deal – essentially three for the price of one.

This information was useful to share with my family and especially my sisters since we have the same parents. In the beginning. I wasn’t ecstatic about doing it and didn’t think that it would form a piece of my identity. Ancestry tests are popular, one reason being the definition of “American” doesn’t exist. Our traditions, heritage, and family values are a part of our identity and can be based on cultural values.
Still, we choose and form our identities. These tests are a vehicle to explore our roots and build on what we’ve already built for ourselves.