Whoever Said Resurrection Was Easy? 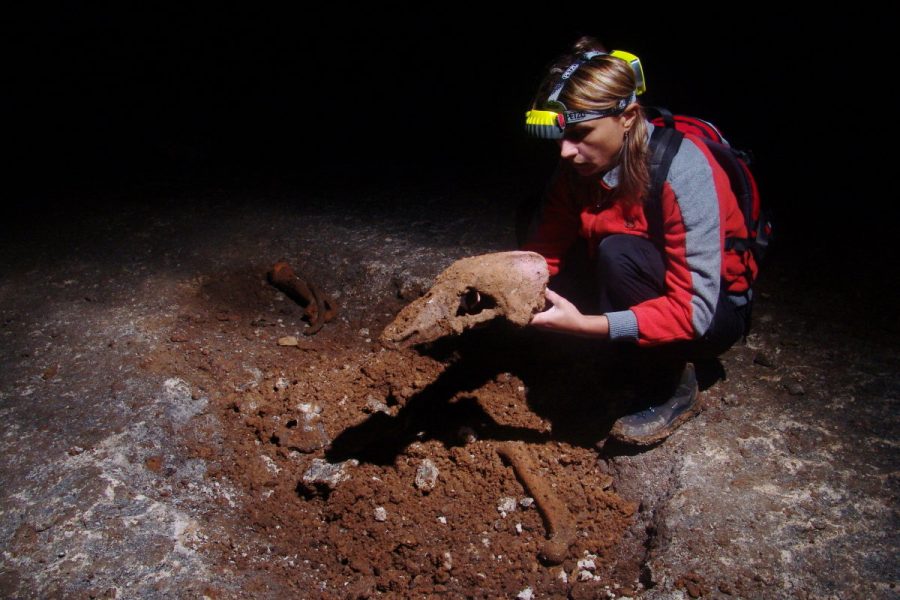 The skull of a cave bear, which went extinct 25,000 years ago. The discovery is the first time species of mammals so far apart have been shown to carry each other’s DNA.CreditCreditAndrei Posmoanu

Extinction. The termination of a species in its entirety. Once a species is declared extinct, it is gone forever.

Some species have been declassified as extinct in the past, but that’s only due to either the efforts of captive breeding programs or a lost herd being discovered somewhere else. Regardless, extinction is a problem that impacts the earths ecosystems in a way that’s difficult to combat.

Unlike deforestation or pollution, where the answer to those problems is to control the amount of tree’s cut down and decrease the number of wasteful materials used, extinction only has preemptive solutions.

That is until the idea of de-extinction was created.

“De-extinction” is a type of science that involves the manipulation of DNA to bring back species that were once killed off. It is an extremely controversial topic with some arguing that science is trying to doom humanity to a “Jurassic Park” like scenario.

However, Ben Novak, the lead scientist at “Revive and Restore” insists that de-extinction serves a greater purpose.

“The goal is not ‘Jurassic Park’ – it’s not for entertainment purposes”.

Ben Novak is based in Australia, currently working on the group’s research into reviving the “Passenger Pigeon,” a species of pigeon that went extinct due to overhunting.

“There is an ecological problem, something has gone extinct and that has caused a problem,” said Ben Novak when asked why the “Passenger Pigeon” should be brought back.

Everything that exists in nature serves some form of function in its ecosystem. Plants feed the fauna, fauna feeds the predator, and when the predator dies the scavengers recycle the corpse. Each species keeps the other from either overpopulated or from starvation. So when one species is eliminated, the ecosystem is thrown into chaos.

“The Passenger Pigeon was the ecosystem engineer of eastern North American forests for tens of thousands of years, shaping the patchwork habitat dynamics that eastern ecosystems rely on, ecosystems now losing diversity without the Passenger Pigeon’s engineering role,” said Novak in a blog post on “Revive and Restores” website.

Some would argue that the solution to this problem is to simply take a different species, like the pigeons that populate New York City, and simply put a flock in the affected areas to solve the problem. However, it’s much more complicated than that.

“De-extinction is about the environment, not the species,” said Novak.

Each species of a bird has certain genetic traits and behaviors that make it a perfect fit for its environment. If one species goes extinct in a certain area, taking someone from that genetic family won’t solve the problem. Those New York City pigeons would not be able to perform the duties of the passenger pigeon, they lack the traits and behaviors to do so.

This is where de-extinction comes into play, it can help reverse the loss of biodiversity.

Granted, not everything can be brought, back according to Novak.

“A species that has gone extinct in the last fifty years is less likely to be brought back due to the factors that made the species go extinct being still present,” said Novak.

He further went on to state that if the species in question can be replaced by an existing species, that would be better than trying to resurrect the original.

“There is a group trying to bring back the Quagga. It’s a zebra with different colored strips. I don’t personally see the point of bringing this one back, you can still get the same effect from using a regular zebra.”

Novak, while he is a believer in this research, also understands the importance of conservation and protecting species that are currently not extinct.

“You would not want to innovate this technology using a member of an endangered species. If you do so, and something goes wrong, then you lose a member of that species and bring it closer to extinction. You are racing against the clock with an endangered species, you should be using that time to research the species and try to save it through other means,” said Novak.

Novak, while understanding the importance of preserving our current species, also has a slightly different definition about what it means to truly be “extinct”. He expressed these views when asked about the death of the last male white rhino and the species inevitable extinction.

“First off, yes the species is ‘fundamentally extinct’ since it cannot produce any new members through breeding. However, that does not mean the species is going to be extinct. Before the last male white rhino died, the San Diego zoo cryo-froze their DNA. The species can be brought back later down the road. So by my biological standards, the white rhino is not extinct. There are still twelve frozen rhinos left in the world,” said Novak.

However, the main question within this topic is not just what is brought back but how it is brought back. Some researchers believe that the secret to bringing back extinct species is to extract dan from the bones of the dead species that have been preserved underground. Many of the current attempts to bring back the “Wolley Mammoth” involve this method.

According to “How To Clone A Mammoth” by Beth Shapiro, the method involves using the DNA preserved in the bones to try and clone the species with a surrogate mother acting as the incubator for the clone eggs. The surrogate mother in question would be the African elephant since it is the closest living descendant to the mammoth.

Novak disagrees with this method of de-extinction, at least for older species like the mammoth.

“After thousands of years of being frozen, your not going to find any viable DNA for a clone. I don’t know why they keep looking for it, it seems to be going nowhere.”

Once the remains of a species are covered in dirt and ice, its remains begin to become contaminated. DNA from other dead species in the ground and bacteria begin to mix with the remains of the new entry, making it impossible to salvage it.

Novak knows this, and Beth Shapiro research backs this up in the third chapter of her book, conveniently named, “Find a Well-Preserved Species”.

“Bacteria living in the soil, fungi, insects, and plants are all organisms that colonize or grow around bone while it is decaying,” wrote Shapiro.

Furthermore, according to Shapiro, contamination doesn’t just come from where the remains are buried, but from even the locations used to research them.

“The main source of contamination in ancient DNA research is DNA from organisms that are alive in the present day. DNA is everywhere. It is on the glassware that is used in our labs.  It is in the reagents and solutions that are used to extract DNA. It is on the laboratory benches and walls and ceiling,” wrote Shapiro.

With this in mind, the plan to clone back extinct species is off the table, but that does not mean all hope is lost for de-extinction.

While mammoths and passenger pigeons maybe dead, their descendant’s live on, carrying the traits that once made up the prior species deep within their DNA. It is possible, given the time and resources, to breed these traits back into the existence by manipulating the DNA so the next pigeon or mammoth born will have the desired traits needed to survive in the environment that once held the original species.

The wooly mammoths fur and size can be brought back through the same tactics farmers used to breed desired traits into cattle and that dog breeder used to create specific types of dogs.

“So for phase one we are currently sequencing the genome, I’d say we are about 30 percent done,” said Novak.

Phase one is only one part of a multi-phase plan with phase to being “creating and reintroducing” the passenger pigeon into the wild. This also doesn’t account for the massive amount of ecological research that Novak and his co-workers put into understanding the ecology of the species.

“We are like 75 percent done with understanding the ecology, which is a small part of the process,” said Novak.

However, even if this is possible to create the mammoth or passenger pigeon, should it be done? Could the species in question even survive?

As far as Novak is concerned, yes it is possible since it has already been done on several occasions.

“By living in New York, you are in the backyard of one of the first genetic rescues of a species. The American Chestnut tree,” said Novak.

The American Chestnut tree was once prominent in America before an imported fungus was accidentally brought to the country, wiping out a large portion of the population. Efforts to repopulate the tree have since been underway in New York and are seen as being highly successful.

“They are working on getting them planted,” said Novak.

The Turkey species that currently roam the east coast is also an example of a successful reintroduction of a species into the wild.

“Turkeys that currently populate the North Eastern part of America were nearly hunted to extinction. However, from a single flock located in Virginia, the turkey populations in New York have been restored. So it is possible to successfully reintroduce a population that was once wiped out,” said Novak.

So it is possible to bring species back from the dead, but it is still difficult with a lot of red tape and regulations to deal with. This will keep that which was once extinct from storming the backyards of New Yorkers for a long time, says Novak.

“Even if we created a passenger pigeon, we couldn’t just put a flock into your backyard.”