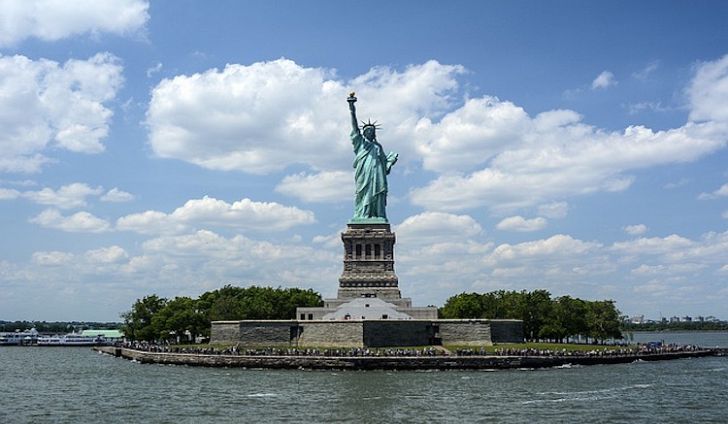 America is a nation of immigrants. People who immigrate to this country are all coming here for one reason. They are making there way from various countries searching and trying to live the American Dream. People from South American countries are fleeing their country because they are facing oppression or violence. Citizens of other countries are also doing the same because they see America as the place to better their life and their family’s lives. America used to be a country where all immigrants were welcomed.

However, under President Donald Trump, the United States have taken an extremely aggressive approach towards immigration. Some have labeled immigrants coming in from South America as very bad people and the President has repeatedly said that he wants to build a bigger wall at the U.S.-Mexico border.

History professor John Amodeo believes that  immigrants coming into the country need to be treated fairly and given an opportunity to stay in America.

“What we need to do is to allow immigration to continue and to screen the immigrants,” Amodeo said. “But at the same time, we shouldn’t make a statement to the effect that immigrants who are coming, especially across the Mexican border into the U.S., are thieves as the President categorizes them. When I look at pictures of these people trying to come in, they are mostly woman and children in desperate needs trying to flee dangerous regimes.”

President Trump’s policies on immigration has led many people to push back against him. Politicians on both side of the political spectrum have given rebuttals on why some of his immigration policies don’t reflect Americas values. In a recent interview, the President stated that he wanted to end birth right citizenship by signing an Executive Order. Democrats and Republicans both explained to the President that if he were to move forward with his suggestion, it would have been unconstitutional. Under the 14th Amendment, birthright citizenship was established.

“If your born here you’re an American citizen whether your parents came here illegal or not,” Amodeo said. “That’s where you have the problem today because Trump wants to get rid of or deport in some cases, even children born in this country of illegal immigrants. That defies the constitution, Civil Rights and the Bill of Rights.”

During President Obama’s time in office he created a program called DACA. This was a program that was created to protect people from deportation, who came to the United States illegally as a child. To be eligible for DACA, the person who is applying must not have any violent crime history. They also need to be living in the United States before 2007. DACA doesn’t protect the applicant’s parents. Many DACA recipients live in fear that their parents who are not protected by the program might get deported. Young Dreamers were provided the opportunity to work in the United States under this program and they had to renew their status every two years.

Under Trump, DACA was ended because his administration believed the program was illegal. People under the program were left in uncertainty because they didn’t know what was next. Some fear they might get deported with the ending of the program that protected so many.

The Assistant Director for the office of Student Life, Louis J. Cameron III, believes as a society we need to help each other more.

“We have a lot of undocumented students,” Louis said. “My goal is to always to get people to think outside of themselves. It’s important for us to understand ourselves, our identities, the way we walk through life and navigate the interactions we have. We are never going to be a better society if we don’t start thinking about others and the ordeals they go through. When it comes to DACA, what does it mean for those individuals who are protected by Daca, but who are potentially living in fear that it may be taken away.”

The President’ss increasing strong rhetoric against immigrants who are in the country illegally have led many to believe that the Republicans are enabling him. Democrats have pushed back against his stance on immigration. They believe their needs to be immigration reform, but not some of the policies the president is suggesting.

“The President has power and there are people in the Republican Party I am glad to say who at least speak out against it,” said Amodeo. “I think most of them are going to go in lock step with him.”

There has to be a movement within Trump’s party, says Amodeo, where by they will express a dissatisfaction in the direction and the conversation he is having with this country. “I think if it comes from his own party that’s even better because it will show the President that there is a dissatisfaction within his own ranks.”

Recently border agents used tear gas on a migrant caravan at the United States border. Officials said the migrants were rushing the border and some may have thrown objects. Immigration advocates and some citizens believe that the use of tear gas was too extreme. Trump administration officials have defended their use of tear gas.

“To use tear gas is something the United States government used to do against protesters,” Amodeo said. “They used to do that against people who were fighting for civil rights, people who were fighting against the war in Vietnam. To use tear gas on people I think is an expression of inhumane policies and it shows the depth of desperation on the part on the people who are trying to get across the border. By rushing there I realize it was wrong, but there is no reason for those agents to have used that. I just don’t feel its right.

Many feel immigration allows the country to have a more diverse culture. The United States provides a lot of great opportunities for people from other countries. Immigrants who get a chance to come to the United States get the ability to further their education, gain better job opportunities and they can provide a better life for their families.

“Immigration is actually a very enriching thing,” Amodeo said. “It brings the culture, language, customs and food. It’s wonderful to have a very multi-cultural society and that’s what we are.”