There’s Something Out of This World in the Hudson Valley 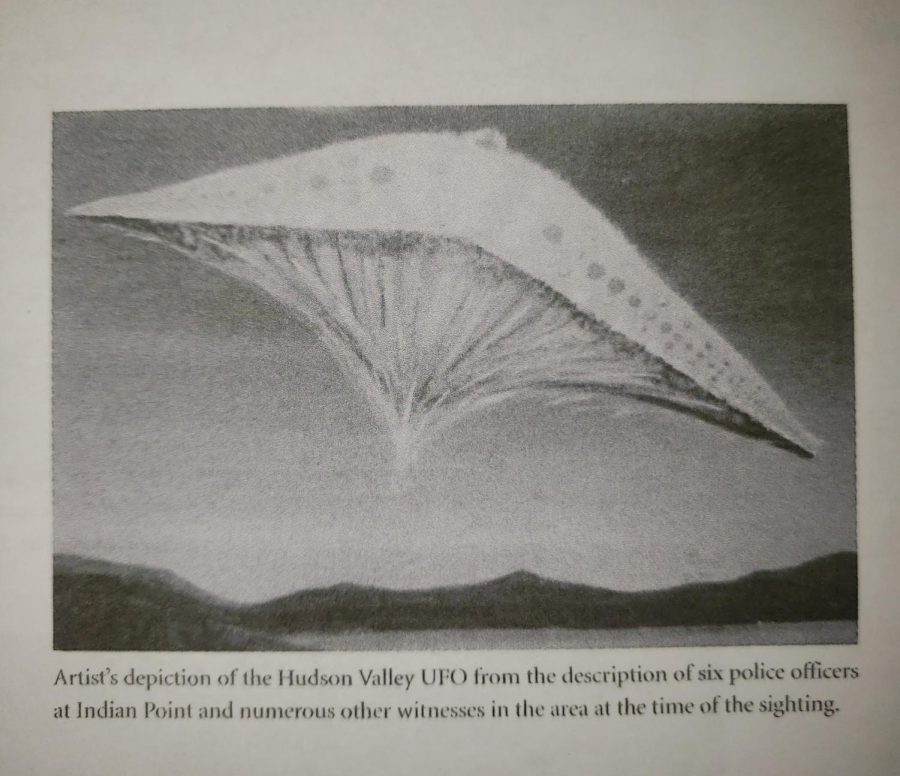 In a world full of skepticism, there are just some concepts too outlandish to discount — or at least that’s what one believer thinks.

It was a chilly evening sometime in the late ’70s or early ’80s. Linda Zimmermann received a call from her friend’s mother, whose word she respected greatly, telling her that three objects had just been spotted over her house in Hillburn and seemed to be moving toward Zimmermann’s house in Nanuet.

“I didn’t hesitate to run outside in my furry bathrobe and slippers and scan the skies. Sure enough, three bright, white, round lights, low in the sky and flying in a V-formation, were silently moving from west to east, roughly following Route 59,” she says. 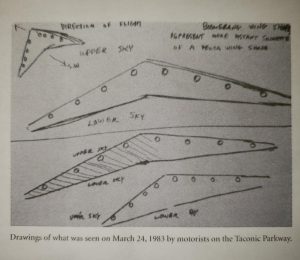 She, her boyfriend, and their friend jumped in the car and chased the lights. They parked at the north end of Lake Tiorati and watched and waited until they noticed lights coming from every direction and moving toward each other.

“I snapped as many pictures as I could, and held my breath waiting for the awful, inevitable collision. And come together they did, but not in a manner any of us anticipated, nor could even understand,” she explains. “The three bright white lights came together in an intense burst of blue light, then slowly, in a controlled manner, descended as a single blue light on the top of the mountain.”

Mesmerized and astonished as they were, they decided to go back over the following weekend to check it out. Zimmermann recounts, “At the summit was a bare, rocky area, and the trees around it had broken branches as if something had landed.”

Zimmermann recalls seeing a newspaper article about UFO sightings in Rockland County during that same week, but she hasn’t been able to locate the clipping. However, she says she’s never doubted what they saw that night and has yet to come up with a logical explanation.

“As a scientist, I do not have enough information to draw a conclusion. As an ordinary observer, my gut feeling that night gravitated toward something out of this world.”

Zimmermann, now 61, is an author and researcher who has spent most of her life diving deep into the possibility of life on other planets.

“Having grown up in the Hudson Valley [New York] with its numerous sightings over the decades, I was exposed to the idea of ‘flying saucers’ at an early age.” 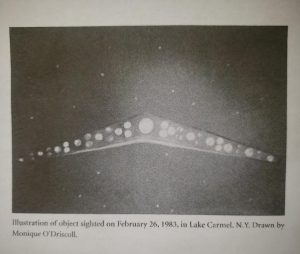 Zimmerman formally became involved in ufology, the study of unidentified flying objects (UFOs), through her lectures around the region.

“Regardless of my topic — history, science, or the paranormal, people would come up to me afterward and tell me their UFO stories. As I had my own sightings and an interest in the topic since I was a kid, I finally decided it was time to really delve into the subject.”

And delve as she did, Zimmermann studied some of the historic world events that took place around the same times that sightings were reported. The facts she exhumed during her journey made being skeptical seem almost impossible.

One of the first recorded waves of UFO sightings took place between California and Texas during 1896 and 1897, which — strange as it may seem — was about six years before the Wright brothers built the first successful powered aircraft.

Then came the wave of 1909. Most prominently in the Hudson Valley, various reports of similar nature were made, 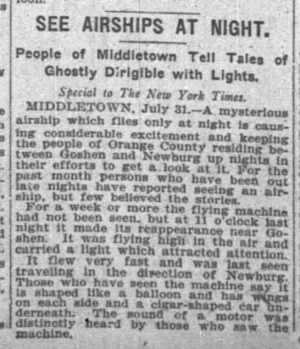 claiming that ‘mysterious airships’ were being sighted rather frequently. Most, if not all of the sightings, were claimed to have been seen at night, one year before the first nighttime airplane flight even took place.

According to Zimmermann, “Skeptics often dismiss all of this activity as secret military craft,” which is why she always stresses the wave of sightings from 1909 (there are also extensive chapters in her books). “It’s very important to establish the precedent that craft with unusual flight characteristics were in the skies of the Hudson Valley long before our military had viable aircraft.”

It took decades for the concept of UFOs and aliens to become widely comprehensible, and in doing so, it introduced the film industry to a whole new world of possibilities.

In 1947, American aviator Kenneth Arnold reported sighting several crescent-shaped objects flying over Mount Rainier, Washington. In 1948, a flying saucer was reported to have crash-landed near an Air Force base in Roswell, New Mexico.

Both of those events are known to have directly inspired the creation of the first ‘space invasion’ films: “The Thing from Another World” (1951), “The War of the Worlds” (1953), and “Invasion of the Body Snatchers” (1956), all of which laid the groundwork for the ongoing extraterrestrial-related trends that have since played a huge part in pop culture. 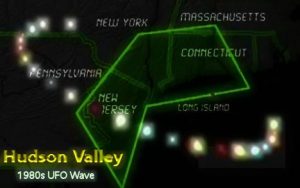 Although there were definitely other sightings throughout the years that were groundbreaking in their own right, the Hudson Valley has had over 30,000 of its own, and no others have been quite as substantial.

“Hudson Valley UFOs [especially the wave of the ‘80s] was basically a forgotten subject in ufology,” Zimmermann explains. “So, I started interviewing hundreds of witnesses, searching archives and old newspapers, writing books, and lecturing across the country to revive awareness and interest in what I consider to be the most active region in the country — perhaps the world — over the last 100-plus years.” 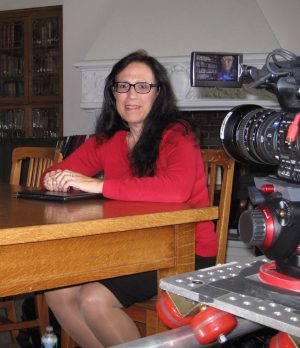 She’s written three books about the sightings: “In the Night Sky,” “Hudson Valley UFOs,” and “More Hudson Valley UFOs.” She also hosts a podcast alongside author Michael Worden, called: “UFO Headquarters.” At 7 p.m. on the second Monday of every month, Zimmermann and Worden dig deep into the most ‘intense and unnerving’ sightings, and they encourage people to call in and share their experiences.

Astronomer and UFO consultant Dr. J. Allen Hynek (1910-1986) is the man who put the phrase ‘close encounter’ on the map. He formulated the classification system that is still presently utilized to better identify UFO reports. ‘Hynek’s Scale’ measures UFO sightings based on increasing proximity to the witness.

The first kind involves only visuals of a UFO or aircraft from anywhere up to 500 feet away. The second kind 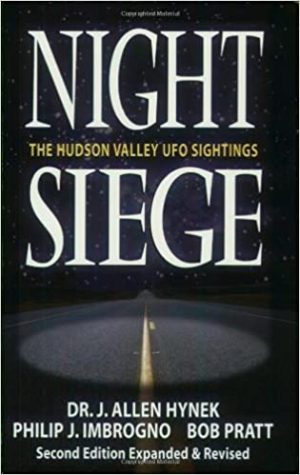 allegedly causes physical effects such as markings in the ground or ‘baked earth,’ interference in the functioning of vehicles or technological devices, disturbed animals, flustered or discomforted witnesses, etc. The third kind could be a visual of both a UFO and/or entities that appear to be its occupants. The fourth kind encompasses physical or psychological human abductions by a UFO or its occupants.

In the book, “Night Siege,” that he co-wrote with Philip J. Imbrogno and Bob Pratt, Hynek provided examples of each ‘kind’ of encounter, using real stories and evidence specifically from Hudson Valley sightings.

His classification system and the phenomenon behind it all is what directly inspired Steven Spielberg’s 1977 film adaptation of, well, “Close Encounters of the Third Kind.”

It was only a few years after Spielberg’s blockbuster hit made its debut when Zimmermann’s own close encounter (of the second kind) took place.

Linda Fighera, 60, of The Bronx, New York, also had an experience in the early ‘80s that she remembers just as vividly today as she did the night it took place. As an average person that hadn’t any prior encounters or related knowledge, this one night fueled her many years of research.

She was at her friend’s house (a familiar place), sitting on the couch by herself, and felt what she describes as, “A sudden presence entering the room – someone’s energy – the feeling you get before you even hear or see them, but you know they’re there,” and she turned as if expecting to see a person, but what she saw far surpassed the capacity of her conscious mind.

“It was translucent and triangular with one of the points directed upward. There was a spherical shape above the top point,” she remembers. “I didn’t feel threatened by what I saw. I just remember accepting it and thinking [somewhat telepathically], ‘Okay, whoever you are and whatever you’re about to do to me, just do it — I’m ready,’ but it never communicated anything back to me. It wasn’t actually tangible, but I could see it. I just sat there and stared at it while it seemed to move closer to me. Then, just as quickly as it had appeared, it disappeared.”

Fighera says that her impression of it hasn’t changed. For an experience that lasted no longer than a few minutes, she confidently describes it as one of the most authentic she’s ever known: an encounter of the third kind.

“My first intellectual understanding of it was that it was undoubtedly extraterrestrial. I never once had the feeling that I was seeing a ghost or a spirit or anything. I didn’t see any lights or UFOs, but it just felt alien-like to me. It wasn’t one of those situations where you do a double-take and realize your eyes were just seeing things. Nothing more ever came of it, but it was definitely there.”

Fighera is one of many who kept their truths moderately private. While she knew exactly how most people would react to such an extraordinary event, she also didn’t know enough at the time about what she’d encountered to even put it into words.

The people of Pine Bush, New York were similar in that regard: hesitant about coming forth to share the immense amount of oddities they’d seen and experienced. Although it had already been an active place for sightings, the wave of the ‘80s and ‘90s made the biggest mark. Author Ellen Crystall traveled there from North New Jersey to investigate what she planned on being just one reported sighting. Instead, she experienced firsthand what she’d previously only heard about. After Crystall wrote her book: “Silent Invasion” in 1996, Pine Bush became known as “The UFO Capital of the World,” now famous for its sightings and annual one-day UFO Fair, which began in 2010.

UFO sightings and other extraterrestrial encounters have seemed fewer and farther between and less intense than they once were. However, Zimmermann says that in 2019, the Orange County, New York area had the most activity recorded in quite some time. Consistent sightings of triangles and unusual lights were reported a considerable amount in the summer and fall months. One sighting, in particular, left quite an unusual impression on its witnesses, as they watched the UFO they’d spotted hovering over a lake, release something into the water below it just before vanishing. Zimmermann says that the immediate area has had a lot of “bizarre sightings by very credible people.”

Enthusiasts consider this ever-fascinating phenomenon to retain a certain air of peculiarity despite the progression of time. While it has long endured, so has the adamant force of skepticism, and presumably, though it has recently been unpredictable, it is unlikely that too much time will pass before another wave ensues.

Ufologists urge witnesses to report sightings and encounters of any kind, even if they aren’t entirely sure of what was experienced. There is no rhyme or reason for the prominence and frequency of UFO waves in the Hudson Valley. Solid methods of tracking and predicting UFO tendencies have yet to be discovered. Researchers depend on witness reports of sightings and encounters, as they are crucial to the very existence of ufology.

For believers and skeptics alike, there will always be questions. The one piece of advice that stands tried-and-true is to ‘keep watching the skies’; for what is seen or unseen may be where the answers lie.

If you have a UFO sighting to report, visit the National UFO Reporting Center website: nuforc.org.
NUFORC absolutely respects confidentiality.