Occupy Wall Street – The Other Guy’s Side 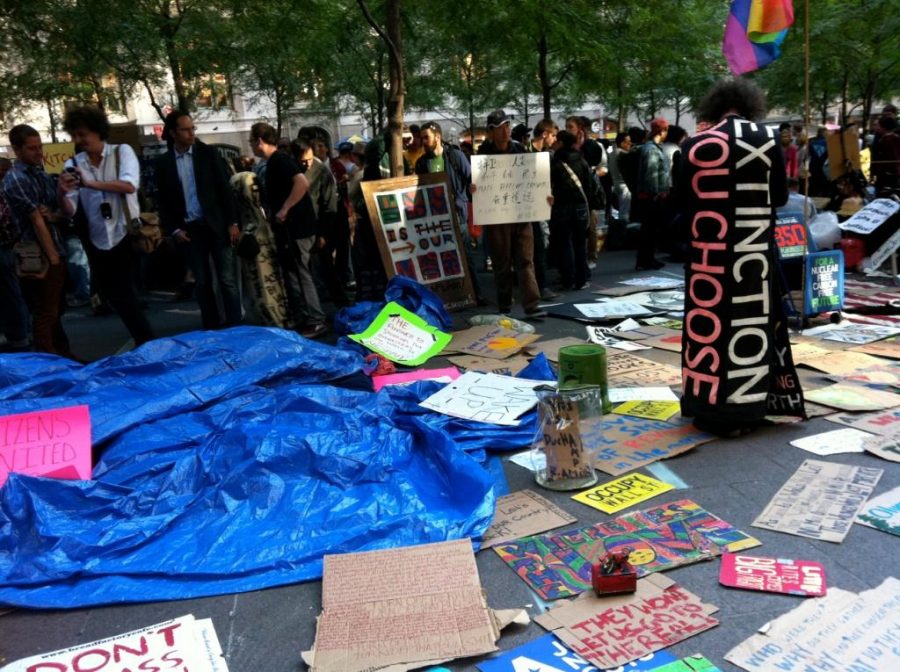 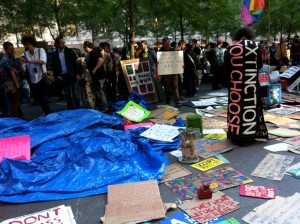 Trent Price packs his lunch every day.He leaves his South Jersey home, waits for the bus, and then waits for his train into the city.  He gets off the path train and walks the three blocks to his office.

It’s a good hour and a half commute- sometimes six, even seven days a week.  He’s used to it by now, though.

On evenings when he’s required to stay late at JP Morgan Chase, he used to grab a falafel from Sam’s and eat it on a bench at the park nearby, which was always near empty after the market had closed, and Wall Street was just a modest street, not a bustling, grinding, smoking machine.

This last month Wall Street’s been the same; stocks have fluctuated but nothing detrimental.  It’s still quiet at night, unless maybe a thunderstorm echoes against the empty roads.

Yet the park on the other hand is anything but.  Once a barren pavement slab, it is now home to 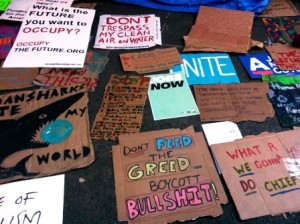 cardboard signs, protective tarps, donated food and hundreds of angry Americans who have assembled to declare a resistance to the corporate control over the U.S. government.  Their biggest foe: the banks.  The bank that has been targeted for lobbying in Washington more than any other:  JP Morgan Chase.

Price’s demeanor is more than modest. Even when he’s making a strong point his tone is calming. Simple white polo, khaki pants and run of the mill black dress shoes make him look like a quintessential all-American 32 year old man, but also he’s a forward-thinking liberal working for a company that has been illustrated as the pinnacle of the greedy bank world.

Despite the negative reputation his employer of five years has earned, he is nowhere near the “1 percent” of Americans that the Occupy Wall Street protesters deem to control a disproportionate amount of money and power.  He feels a stigma attached to the fact he works on Wall Street even though he agrees a lot with the protesters.

“I know tons of people working for other companies, making way more money than me, but they don’t get criticized,” said Price.

Price argues that he and most of his coworkers are just liberal middle class people who share a lot of the same frustrations as the OWS movement.

“I actually think it’s really inspiring that so many people are taking a stand, coming together. It’s been a long time since people rallied for a cause here in the States,” said Price.

Price thinks the “trickle down” theory does not work, and that there should be tax codes to benefit the people that don’t have as much.

“The rich should pay more, so we can help the poor,” Price says.

Zucotti Park, which OWS has renamed Liberty Park, has been the home to protestors since Sept. 17.  Some have sleeping bags and have not left for weeks, and some just visit for hours at a time.

The population ranges from passionate hippies, anarchists with poignant literature, squatters taking advantage of a safe place to sleep, wronged union workers, energetic college kids and a hodgepodge of people from celebrities to Catholic priests.

Father Paul Mayer of East Orange, New Jersey was there the early morning of Oct. 13 when Brookfield Properties, the owner of the private park, and Mayor Michael Bloomberg had warned the protestors to evacuate for a mandatory cleaning.

“This is a historic development, and I wanted to be down here to support the people,” said Mayer.

“I think it’s outrageous what the city is doing,” he said with regard to trying to end the protest.

Father Mayer was relieved that Brookfield Properties lifted the mandatory evacuation at the final hour.

“I wouldn’t have minded getting arrested, but I do have a wedding tonight.  That would not be a happy bride,” Mayer chuckled.

The protesters have a legal team on hand in event of an arrest being made, along with a medic station and about a dozen booths distributing literature or other services.

Thaddeus Umpster, anarchist leader of a New World In Our Hearts, has a table set up handing out free small magazines describing an ideal anarchist society and his groups feeling about OWS.  Although he hangs back at night for fear of the police presence, he’s really proud to be a part of the movement, which he proudly describes as anarchy.

“I’m so inspired by the way people are organizing,” Umpster explains. “It’s non-hierarchical.  Not one person is in charge.”

Apart from Umpster and other protesters’ feelings, the lack of leadership and the absence of a clear goal is exactly why OWS has been criticized.  At occupywallstreet.org, the protestors or “general assembly,” as they call themselves, list over 20 demands they want changed in Washington, the economic system, and other forces they deem oppressive.

“I’ve seen their website and I think it’s kind of ridiculous,” Price says.  “If there was a singular vision and more action it might accomplish more.  I just don’t think any higher ups are even being influenced.”

The protesters, who had been mainly congregating in Liberty Park, decided to take a fieldtrip this past weekend marching uptown through Washington Square Park, Times Square, and to a few residences of well-known CEO’s.

“J.P. Morgan, you’re no good! People need a Robin Hood!” was a chant heard outside the home of Jamie Dimon, CEO of JPMorgan Chase on Oct. 15.

Dimon made a whopping $20.8 million last year, despite the state of the economy and the millions of Americans out of a job, some of those former JPMorgan Chase employees.

An average chief executive in the United States makes 142 times that of lower-ranked employees, according to Reuters.

Price feels secure in his job for now despite the layoffs that he’s sees happen in waves.

“They do their annual budget, then a head count and then they make the cuts.  As long as they don’t start outsourcing, I think I’m safe,” Price says with a serious tone and a deep sigh afterwards.

JPMorgan Chase sent out an email the first week of the protest warning their employees to be careful whom they speak to and be aware of their surroundings.  They have heightened their security and closed some of the exits of the building.

“All it would take is one misguided person to come in with bombs strapped to himself and then, wow. That would really mess things up,” says Price in front of his building, just one block away from Liberty Park.

It’s 5 p.m. on a Wednesday and there’s a slight chill in the air as the sun starts to get lost behind the buildings west of Liberty Park.  As Price gets closer to the park he points at the place where his favorite falafel stand used to be.  The street is now lined with news vans.

A barricade with multiple openings surrounds the whole park accompanied by police officers.  Today, there are at least 30 police officers within view.

There are t-shirts being stenciled with spray-paint that read, WE ARE THE 99%.  A woman yells out to people passing by, “Bring your own shirt. We’ll hook you up.”

Price winces at the smell that’s getting stronger as he follows the deep thumping of a drum circle to the west side of the park.  The smell is warm and musty, like mildewed clothes and food that’s gone bad.

A family of European tourists with their arms filled with a days worth of shopping bags, pause on the other side of the barricade, where the spectators watch.  A small boy attempts to take a picture with one hand holding his camera and the other pinching his nostrils.  Price is amused and lets out a deep chuckle.

There’s a sea of signs:

I am not a commodity

And also a multitude of slightly off topic signs.

“Quit brainwashing our elderly via TV… Stop racism in the justice system,” Price quotes the cardboard signs.  “There’s such a variation of issues here.”

As he turns the corner on to the west side of the street he is face to face with a storm of people banging drums on the aisles of the steps up to the park.  College aged kids are dancing and bouncing about carelessly.  Price makes a remark comparing their energy to Woodstock.

“Well, they are on drugs,” a nearby police officer says.

A woman atop a concrete pillar donning a wild grin rocks her hips and shakes her brown-coiled dreadlocks as a bright orange hoola-hoop spins around her waist.

As the drumming continues people march in and out of the park carrying flags and signs. One group bestows a flag on a 15-foot pole that with a gust of wind is whipped so taut around the pole that its message is lost.  The woman continues to emphatically raise her flag up and down to what she can distinguish as a beat from the men and women pounding on the circular instruments.

Before Price heads towards the train to start his commute home, he giggles once more to himself.

“I’ve never seen a band that’s all drummers before.”