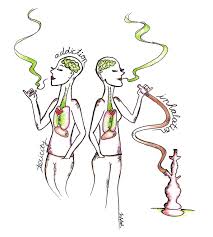 New York nightclubs are seeing a rise in a Middle Eastern tradition that dates back over 400 years. And while cigarettes can get a patron kicked out of a club, hookah can make smokers hover around a pipe.

With its flavored tobacco and its smoking pipes that originated in India/Middle East, this new instrument has become its popularity throughout the United States.

Modern bars are taking over by adopting this hookah trend, which has been spreading all across New York City. Hookah bars offer sessions to groups. Smokers consider this a fun way of smoking tobacco to relieve the nerves by enjoying it with others, which is the biggest part of its attraction – that and its fruity flavors.
Hookah has been in existence for over 400 years, deeply rooted in Middle Eastern countries. During that time, hookah was known as Narghile, Sheesha, and Gozabut.

While Americans look at Hookah as an essential accessory piece for partying, Middle Easterners attach a more heartfelt significance to it. To them, it represents a princess, and the simplicity of her body. The round shape bowl on the top, which is used to hold and heat the flavor tobacco, is viewed as her crown. The round type body indicates the elegance of her womanly features, and the pipe is meant to represent the arms of a woman, lusting to be touched and shared by the environment.
When asking Kristine Jones, a Mercy alumna, if she’s a hookah smoker, she replies, “Yeah, I do hookah. Who doesn’t? I tend to do it mostly when I’m out with my friends partying.  It’s not so much of a why I do it, it’s a just because type of thing.”
Preferably, many Middle-Easterners and other cultures would rather smoke hookah than cigarettes. They believe that it is less harmful and gives a person more time to contemplate life when compared to smoking a cigarette. Hookah is known to teach patience, tolerance and a more healthy approach to life.  Cigarettes, they believe, are for those who are more engaged in a fast-paced life and are not necessarily interested in enjoying the tobacco over the nicotine.

Yet there is a downside.

While it may look cool for some to be seen puffing from a hookah pipe, Hookah smokers inhale more tobacco than cigarette smokers because they consume a larger volume of tobacco in a smoking session from to the amount of toxins they’re pumping into their systems. Hookah smoke contains high levels of toxic compounds including tar, carbon monoxide, heavy metals and carcinogens. Many believe that the water in the hookah filters out the toxic ingredients. According to The World Health Organization (WHO), Hookah’s health risk is 48 times more harmful than cigarettes.

Hookah is known to induce diseases faster than cigarette smoking. Experts say that it causes cardiovascular disorders and increases blood pressure. Lung cancer is another common ailment. Studies show that wood cinders or charcoal are used as fuel to heat the tobacco and when these substances are burned, they produce potent chemicals.

Although hookah has been around for years, today in many parts of New York City, hookah has made its way to these retro-bars where “the rocking youths,” are puffing away. These clubs are promoting this flavored tobacco in a fun way making it the new trend of the nightlife. What these intoxicated people do not know is the harm that hookah has. For those who don’t know, any type of smoking reduces appetite, which kills certain nutrients in the body that are essential for the immune system.